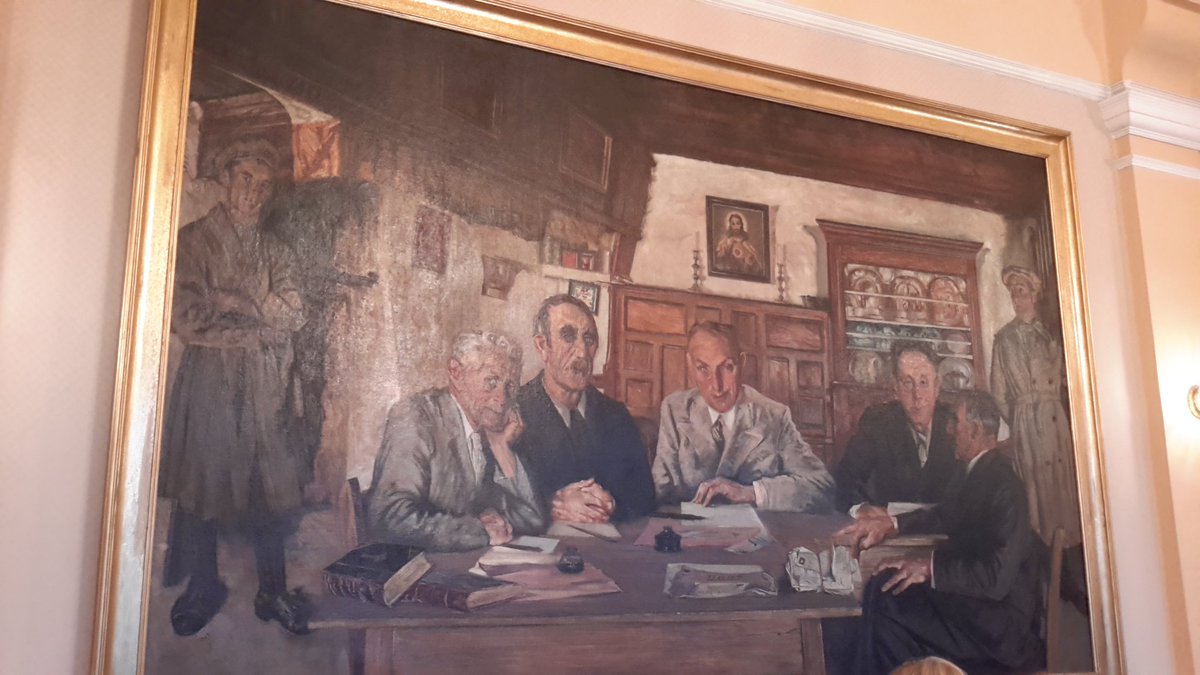 Irish nationalists continue with their struggle to secure the freedom of their country. The Dáil, Ireland’s self-declared sovereign parliament, is working to create the administrative apparatus of an independent state. To fund its operations it has recently announced a bond issue, with bonds purchasable both within and outside the country. Early indications are that the bond issue will be a great success, with large numbers of people in both Ireland and the United State seeking to buy them. The Dáil is also working to create a parallel court system that will bypass the British controlled system of justice operating in the country.

Irish nationalists are working to internationalise the conflict. De Valera, Sinn Féin leader and president of the Dáil government, has travelled to the United States to court opinion there. Ireland’s cause has already excited much American interest, particularly among those of Irish descent. The US Senate has passed a resolution calling for Irish representatives to be heard at the Paris Conference; Britain’s objections have unfortunately prevented the raising of the Irish question there. Within Ireland the military campaign for Irish freedom is escalating, as are British attempts to repress it. The country is becoming increasingly militarised and acts of violence are becoming more routine. Earlier this month policemen in Dublin were shot (but not fatally) when dispersing a crowd that had gathered to attend a banned memorial concert for James Connolly. Today meanwhile in Thurles, Michael Hunt of the Royal Irish Constabulary is shot and killed in broad daylight in a street thronged with people returning from a race meeting. A district inspector, he is the most senior policeman to have lost his life in the conflict thus far. 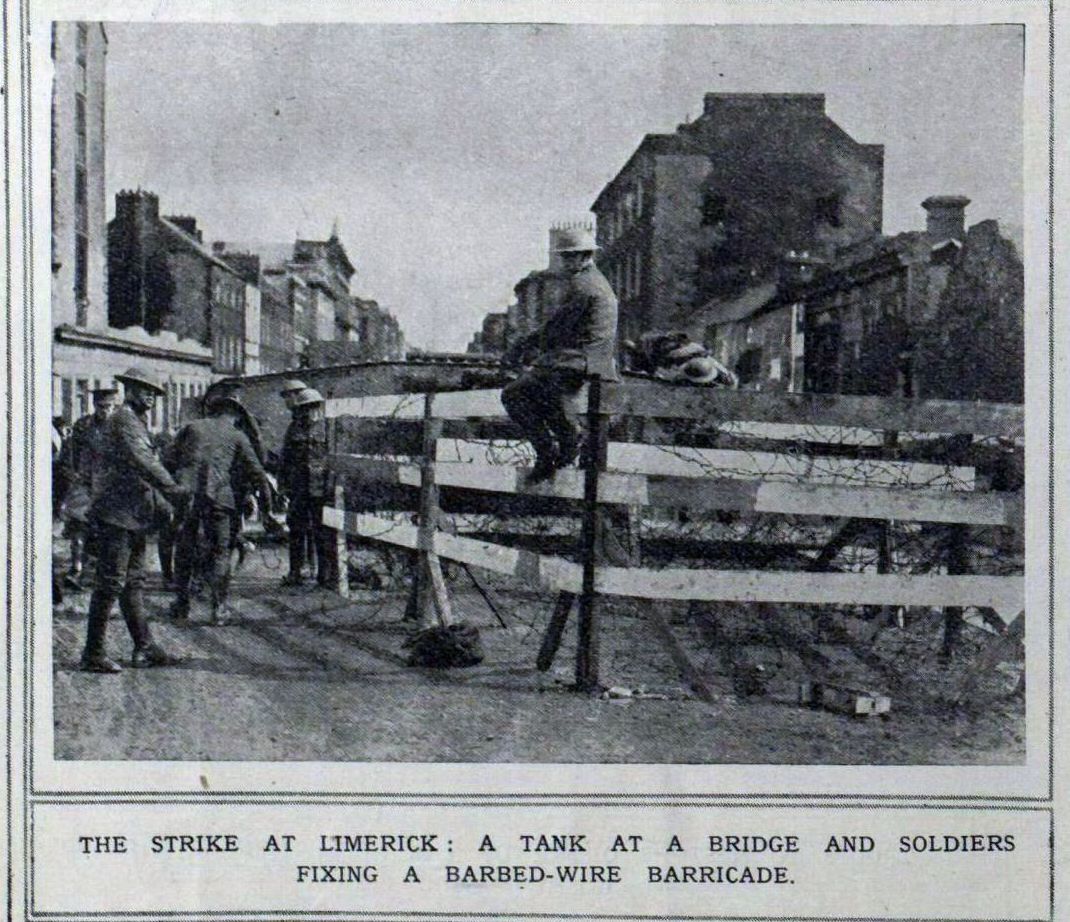 Ireland is in an increasingly restive state. In Dublin through Dáil Éireann, the self-declared national parliament, Sinn Féin members are attempting create the trappings of an independent nation. Meanwhile a military campaign is building as members of the Irish Volunteers (now increasingly known as the Irish Republican Army) attempt to seize arms and carry out attacks on British forces. The political and military campaigns operate in tandem, with some of the leading Sinn Féin members also being involved in directing IRA operations.

Tensions are mounting in particular in Limerick. Here Robert Byrne, a local trade unionist and IRA organiser, has been arrested by the authorities. The IRA launch a daring attempt to free him but the mission goes awry: one of his would-be rescuers accidentally shoots and kills Byrne. The incident causes uproar, with many believing that Byrne has in fact been murdered by the police. The city sees an upsurge in demonstrations and protests against the authorities.

The British respond to the unrest by declaring martial law in Limerick, creating a cordon around it and blocking movement into or out of the city without permission. In response, the Limerick’s trade unionists declare a general strike. They also take over effective government of the city, issuing their own money and organising the distribution of food. The strike committee starts being referred to as the Limerick Soviet, a sign that perhaps Ireland too is about to follow Russia, Hungary and Bavaria down the road to socialist revolution.

British soldiers and a tank at a checkpoint into Limerick (Limerick Soviet 2019, @LimerickSoviet on Twitter) Irish nationalists are attempting to secure the independence of their country. The military strand of this struggle is still relatively dormant, with the ambush at Soloheadbeg in January not being followed by a general escalation in violence. However disturbances are still occurring, with a recent example being the killing of magistrate John C. Milling in County Mayo; his judgements had imprisoned members of the Irish Volunteers.

The political strand of the independence struggle is currently centred on Dublin, where Dáil Éireann, the self-declared Irish parliament, is meeting. Following De Valera‘s escape and the release of other leading Sinn Féin members, the party is now in a position to revitalise the Dáil government. Yesterday the Dáil approved De Valera’s appointment as prime minister and today it approves his cabinet. Michael Collins, who led the operation to break him out of jail, becomes the Minister for Finance, charged with rustling up money to keep the fledgling state apparatus running. And Constance Markievicz is appointed Minister for Labour; she is already the first woman elected to Britain’s House of Commons and now she is the first woman to hold ministerial office in a modern democracy.

In Ireland members of Sinn Féin elected to the British House of Commons have assembled in Dublin, proclaiming themselves to be Dáil Éireann, the parliament of a free Ireland. They have attempted to gain international support for their struggle for Irish freedom, with mixed success. The US House of Representatives has passed a resolution supporting Irish self-determination, but attempts to make Ireland’s case at the Paris Conference have unsurprisingly been blocked by Britain and its Allies.

For now the British response to Sinn Féin’s efforts are relatively restrained; the authorities perhaps hope that if they leave Dáil Éireann alone it will fade away into irrelevance. British policy can at times even be conciliatory. Sinn Féin leader Éamon de Valera recently escaped from jail in England, but perhaps the drama of that affair was unnecessary. Today the British release many of the Sinn Féin leaders they had arrested last year on foot of involvement in an imaginary German plot. Griffith, Markievicz and others are now on their way home. Whether their return will calm Ireland or further vitalise Sinn Féin’s struggle remains to be seen. 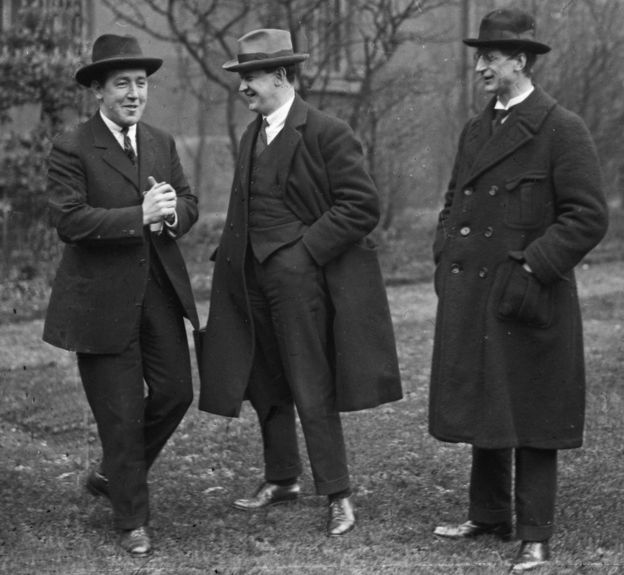 Éamon de Valera is the leader of Sinn Féin, the radical Irish nationalist party. Since last May he has been under arrest, rounded up with other Sinn Féin leaders on suspicion of involvement in an imaginary German plot to invade Ireland.

De Valera is being held in Lincoln Jail in England, but is keen to escape and return to Ireland. And his comrades at home are keen to set him free. Hidden in a cake they send de Valera a blank key and a set of files. With the aid of another prisoner, de Valera creates a master key. Tonight he and fellow Republicans Sean McGarry and Sean Milroy let themselves out of their cell and then through a door to the outside world in the prison’s exercise yard. Waiting for them are fellow revolutionaries Michael Collins and Harry Boland, who whisk the fugitives away to a safe house. Soon they will be transported to Ireland, where de Valera will be able to resume his leadership of Ireland’s struggle for independence. 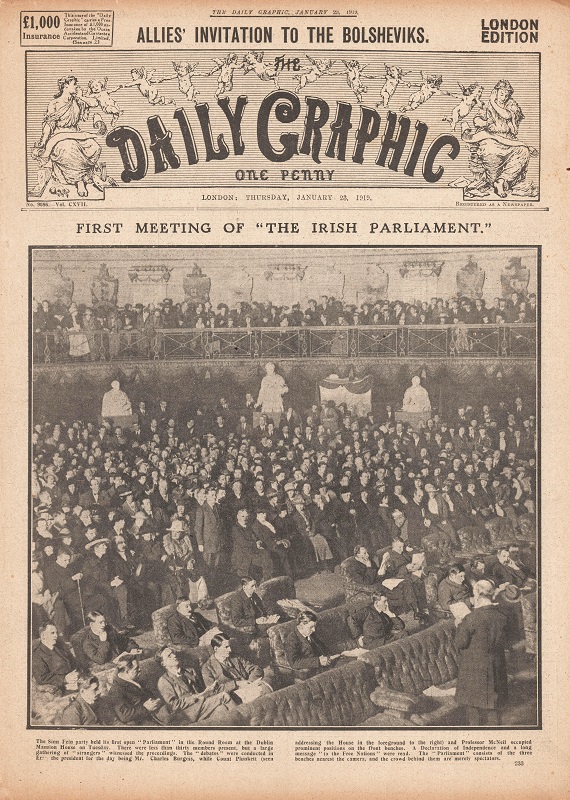 Sinn Féin won 73 of 105 Irish seats in the recent general election. True to their pre-election promises, they have not travelled to London to take their seats in the House of Commons. Instead those of them who are not in prison or on the run assemble today in Dublin, proclaiming themselves to be Dáil Éireann, the sovereign parliament of an independent Irish nation (the other 32 men elected from Irish constituencies are also invited to attend, but none of them choose to do so).

The first meeting of Dáil Éireann is an event of political theatre. Proceedings take place in the Irish language. As the roll is read, members absent because they are in jail are recorded as being “fé ghlas ag Gallaibh” (imprisoned by the foreigners). Two key documents are read out in French and English as well as Irish: a Declaration of Independence and a Message to the Free Nations of the World, which seeks support for Irish independence.

The Democratic Programme of the Dáil is also read out, a statement of progressive political aims largely drafted by Thomas Johnson, leader of the Irish Labour Party. Labour had chosen not to contest the 1918 election and the Democratic Programme’s proclamation is a quid pro quo for its leaving the field clear for Sinn Féin. 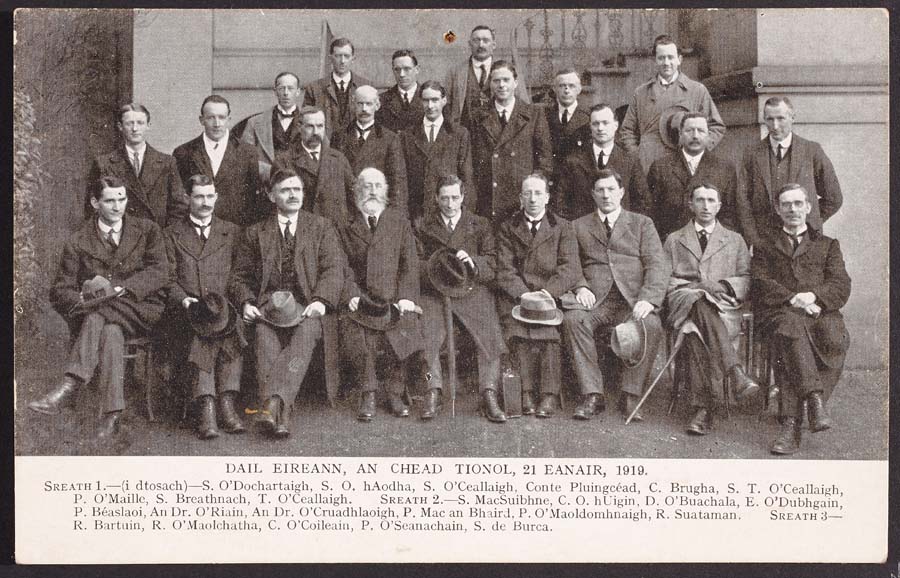 The members of Dáil Éireann hope that their parliament will become the parliament of a nation that is independent in fact as well as in aspiration. They hope also that this independence will be achieved through political means. However the parliamentarians are not the only people working towards Irish independence. The Irish Volunteers (whose members staged the 1916 Easter Rising in alliance with the Irish Citizen Army) still exist as a paramilitary force dedicated to achieving Irish independence. Many leading members of Sinn Féin are also members of the Irish Volunteers (increasingly referred to as the Irish Republican Army) but the relationship between the two organisations is complex. 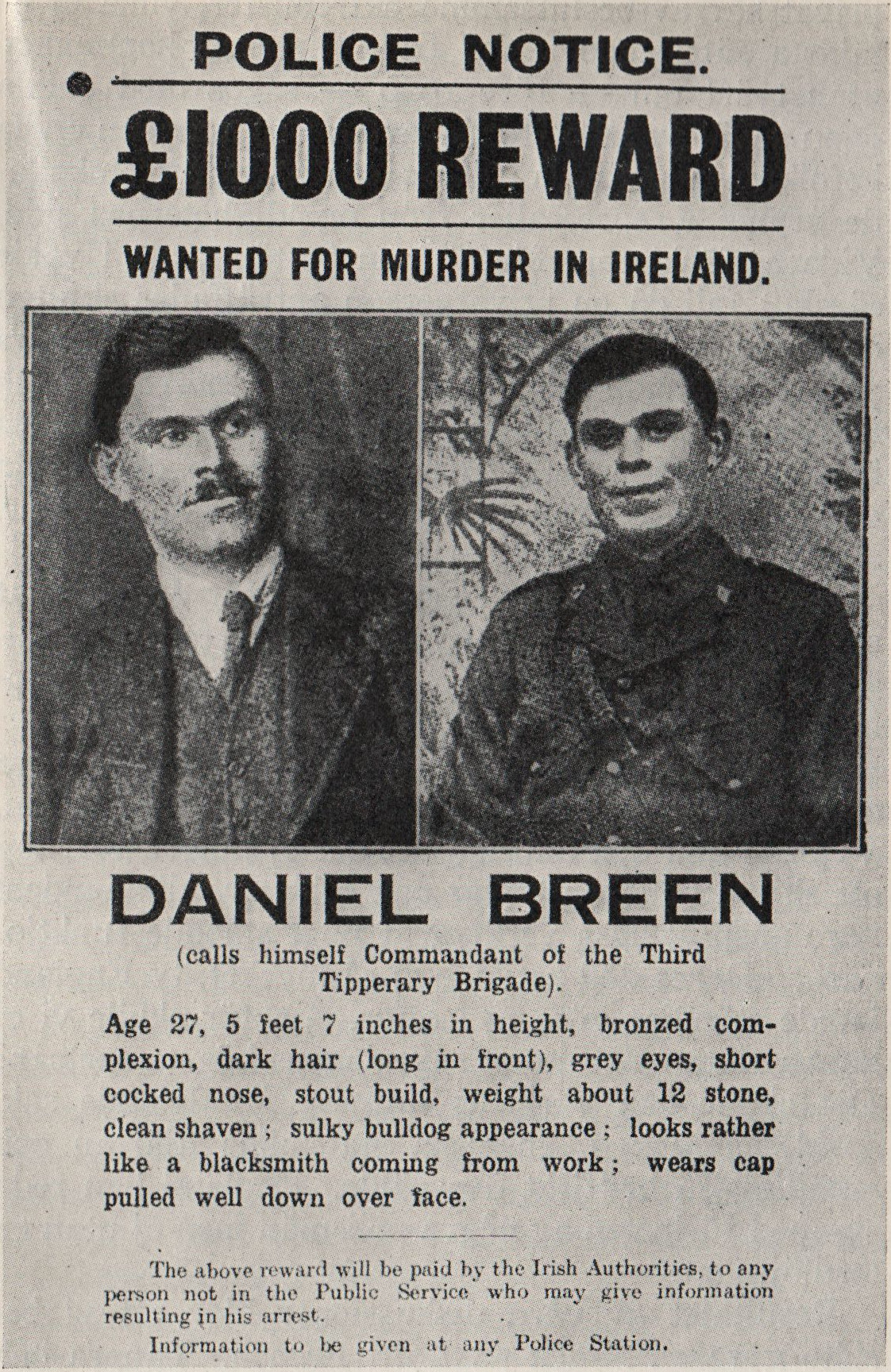 While the politicians meet in Dublin, a unit of the Volunteers in Co. Tipperary prepares to strike a more violent blow for Ireland. Acting on their own authority and commanded by Séamus Robinson, these Volunteers ambush two policemen escorting a consignment of gelignite to a quarry at Soloheadbeg. The policemen, James McDonnell and Patrick O’Connell, are shot and killed, the first victims of this new phase in the struggle for Irish freedom. Ireland voted on 14 December as part of the United Kingdom’s first general election since 1911. Today the votes are finally counted and the results reveal that Sinn Féin has definitively supplanted the Irish Parliamentary Party as the voice of Irish nationalism, with the IPP winning just 6 seats to Sinn Féin’s 73. John Dillon, the IPP’s leader, loses his East Mayo seat to Sinn Féín leader Éamon de Valera, who is currently in prison in England after being arrested earlier this year on suspicion of involvement in an outlandish German plot to invade Ireland. Unionist parties meanwhile dominate in the north east of the country, where many Protestant voters fear the consequences of self-rule in mainly Catholic Ireland. This is also where the Irish Parliamentary Party wins most of its seats; IPP candidates are more used to battling on against adverse circumstances here.

Apart from the north east, the electoral map of Ireland is now a sea of dark green, representing Sinn Féin victories. The only exceptions to the Sinn Féin sweep are Waterford City, where William Redmond is elected to the seat previously held by the late John Redmond, his father and the former leader of the IPP, and Rathmines in Dublin, where Unionist candidate Maurice Dockrell is elected. 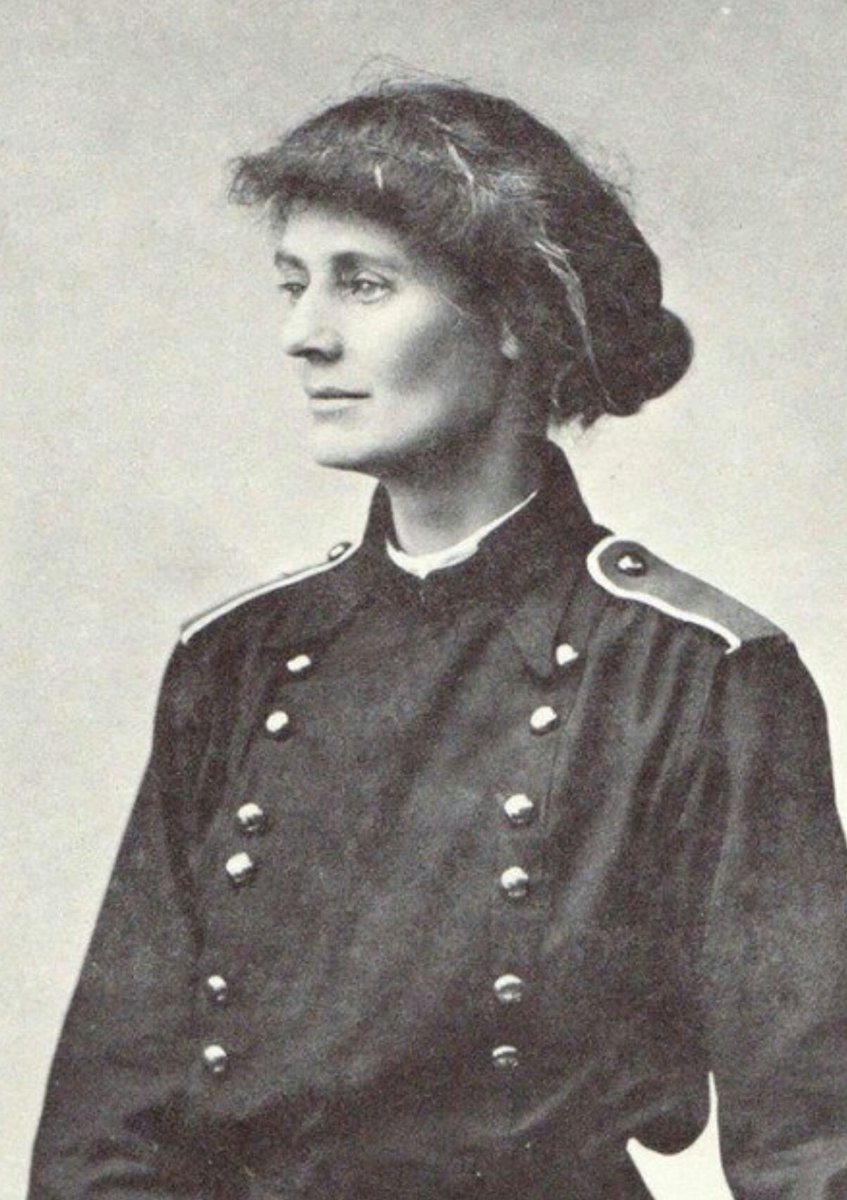 Two women ran for Sinn Féin and one of these, Constance Markievicz, is elected. Like De Valera she played a leading role in the 1916 Rising and like him she is also currently in jail in England.

Sinn Féin candidates have secured election on an abstentionist ticket: they have promised not to take their seats in Westminster but instead to assemble as an Irish parliament in Dublin. Now those elected Sinn Féin representatives who are not on the run or in jail prepare to meet in January as the first sitting of a sovereign Irish parliament, to be known in the Irish language as Dáil Éireann.

Sinn Féin election poster (RTÉ: Election 1918 – what you need to know about how Ireland voted)