Seven weeks ago the Allies presented their peace terms to the Germans. Five days ago the German government finally agreed to accept the terms rather than face an Allied invasion. Today their plenipotentiaries, Herman Müller of the Social Democrats and Johannes Bell of the Centre Party, arrive in Versailles to sign the treaty.

The Allies have decided that the peace treaty will be signed in the Hall of Mirrors in the former royal palace, where in 1871 the German Empire was proclaimed after France was defeated in the Franco-Prussian War. Proceedings are opened by Clemenceau, the French premier. He calls on the Germans to sign the treaty, thereby signifying that their country will abide by the peace terms. Müller and Bell do so, making no speech and offering no protest, to everyone’s relief. The various Allied delegations then sign: first Wilson and the Americans, then Lloyd George and the British Empire delegations, then the French, Italian and Japanese delegations, who are in turn followed by representatives of the smaller powers. The whole affair is a piece of diplomatic theatre, so much so that Paul Cambon, France’s ambassador to Britain, feels that the occasion lacked only music and dancing girls.

The treaty contains many provisions that the Germans find distasteful. They are obliged to shoulder the responsibility for starting the war and they must also pay substantial reparations to the Allies. Large swathes of Germany territory is being ceded to Poland, whose corridor to the sea separates East Prussia from the rest of Germany; Danzig meanwhile is to become a free city, effectively a port for Poland. Germany is also losing territory to France (the provinces of Alsace and Lorraine, captured in 1871), Belgium and Denmark (which has managed to expand its frontiers despite being neutral in the war). Germany is also to lose all its colonies, which will be divided out among the Allies as mandates, to be run for the benefit of their inhabitants. Meanwhile Germany’s union with Austria is forbidden and it will have to accept a long occupation of the Rhineland.

The treaty also imposes irksome restriction on Germany’s internal organisation. The country’s armed forces are to be limited in size to just 100,000 troops, who are to be long-serving volunteers rather than conscripts. Tanks and aircraft are forbidden to the German armed forces, as are chemical weapons. The navy is to be severely restricted in size and prohibited from possessing U-boats.

The German delegates consider these terms harsh. Some on the Allied side agree with them, with Lloyd George and Wilson in particular worrying that the treaty’s terms are laying the grounds for future wars, as one day a resentful Germany will seek its vengeance. But others, notably Clemenceau and especially Marshal Foch fear that the terms are too lenient, leaving France vulnerable to future attack by a resurgent Germany.

Wilson’s fears regarding the treaty’s harshness are assuaged by the foundation of a new League of Nations. The covenant of this international body has been included in the treaty, whose signatories are to be founding members (apart from Germany, which will only be allowed to join when it has demonstrated its reformed character). Wilson hopes that the League will allow the nations of the world to settle their disputes peacefully, without recourse to war.

The signing of the treaty does not bring an end to the work of the Paris Conference. Peace treaties with Austria, Bulgaria and Turkey remain to be drafted. But Germany was the Allies’ main enemy and with the German peace treaty signed there is a general sense that the conference is moving on to less important matters. Lloyd George and Wilson prepare to leave Paris and return home, with Wilson in particular knowing that selling the treaty domestically will not be easy. And so in a sense the First World War comes to an end, five years to the day after a Serbian nationalist shot and killed an Austrian archduke.

The Signing of Peace in the Hall of Mirrors, by William Orpen (Wikipedia)

In Paris the Allies are still discussing Germany’s future frontiers. The French, particularly Marshal Foch, are still pressing for the Rhineland to be detached from Germany and turned into some kind of French protectorate, but the British and Americans are not interested.

The Allies have at least managed to reach some agreement on Germany’s frontiers with Poland. Disagreement here had been over the size of the corridor that would link Poland to the sea. The Polish delegation has pushed for a wide corridor and for the port of Danzig to be annexed to Poland. This would unfortunately leave large numbers of Germans inside Poland’s frontiers but the Poles argue that a wide corridor is necessary for their security. The French are sympathetic to the Poles, as part of Clemenceau‘s general interest in weakening Germany as much as possible, but Britain’s Lloyd George is more wary, fearing that too many Germans on the wrong side of the Polish-German frontier will sow the seeds of future conflict.

Wilson comes round to Lloyd George’s thinking, perhaps fearing the consequences for Fiume on the Adriatic if Danzig is given to Poland. Now Clemenceau is obliged to accept less generous frontiers for Poland. The corridor will be narrow, minimising the number of Germans that will find themselves living in Poland. And Danzig will be a free city, linked to Poland but self-governing. To the Poles this is a shocking betrayal. Roman Dmowski, co-leader of their delegation, becomes convinced that Lloyd George is an enemy of his country. He complains to his colleagues that the British prime minister is “the agent of the Jews”. 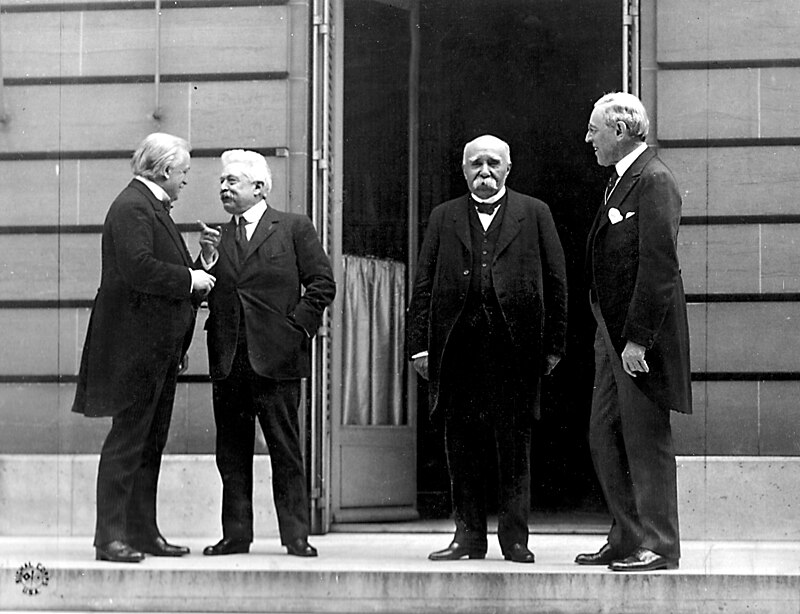 In an effort to streamline decision making at the Paris Conference, Allied leaders have replaced the Supreme Council with the Council of Four, containing just Wilson, Lloyd George, Clemenceau and Orlando (and not their foreign ministers). The exclusion of the Japanese from the top table is justified on the basis that negotiations are now dealing primarily with European concerns, about which they have little to contribute.

Negotiations between the Allies have become increasingly tense, reflecting a fundamental divide in the approach of Clemenceau from that of Lloyd George and Wilson. Clemenceau wants punitive terms imposed on Germany, to prevent it ever threatening France again. The British and American leaders however fear so alienating Germany that it either refuses to sign the peace treaty or else reneges on it as soon afterwards as it can. Their further fear is that if Germany is treated too harshly it will follow Hungary into communism. And Lloyd George worries that if Germany is excessively weakened then France will become too powerful.

This divide affects Allied discussions on Poland’s frontiers, where Clemenceau is supporting proposals to give the country a wide corridor to the sea containing large numbers of Germans. But it is in the west that the difficulties are most acute. Clemenceau supports the separation of the Rhineland from the rest of Germany, something his French and British counterparts regard as a recipe for disaster. The French are also seeking the annexation of the Saar, a heavily industrialised border region rich in coal.

Clemenceau once more states France’s claim to the Saar today, leading to a major row between him and Wilson. Lloyd George and Orlando manage to smooth things over and a possible compromise is agreed: perhaps the Saar could remain autonomous and demilitarised. The French and American leaders ostensibly renew their friendship, but in private each comments on the other’s intransigence. 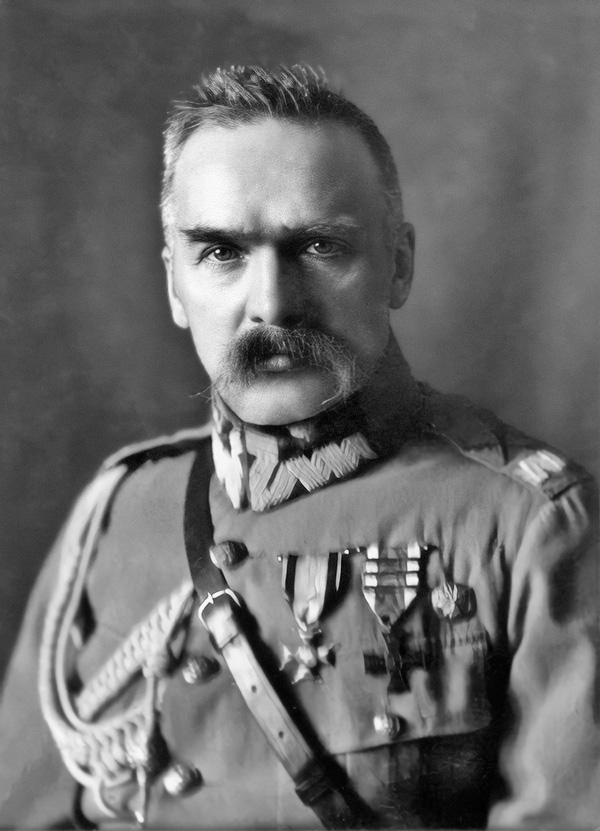 Poland disappeared from the map of Europe in the late 18th century, when it was partitioned between Prussia, Austria and Russia. Now it has popped back into being, but its borders are uncertain, with the forces of Józef Piłsudski in Warsaw engaged in messy wars along the uncharted frontiers with Germany, Czechoslovakia and Ukraine. Poland is also divided between the supporters of Piłsudski, who presents himself as something of a cosmopolitan liberal despite his military background, and those supporting Roman Dmowski, who is less tolerant of Poland’s religious and ethnic minorities.

Some fear that Poland will descend into civil war, but the Poles manage to patch up their differences. The country has recently held parliamentary elections and Piłsudski has agreed to appoint Dmowski as representative to the Paris Conference, together with Paderewski, the newly appointed prime minister. Today Dmowski addresses the conference, arguing that both justice and pragmatism require the establishment of a large and powerful Poland. The Allies, particularly the French, are broadly sympathetic to the Poles, seeing Poland as vital for the containment of both Germany and Bolshevik Russia. But Dmowski rather overstates Poland’s case, arguing for a giant Poland that would swallow up all of Lithuania (as well as much of eastern Prussia). The Allies are concerned that Poland is getting ideas above its station, with the border clashes with Czechoslovakia over the town of Teschen particularly disconcerting. But for now they are not in a position to intervene decisively in eastern Europe, so the Poles are free to do what they will.