The war has ended in the Levant but large number of Allied troops remain in Syria and Palestine. Some of these will be here for some time yet as enforcers of the British or French suzerainty that is succeeding Turkish rule. Most of the Allied troops are however slated for demobilisation, but a shortage of shipping means that the soldiers cannot be transported home just yet.

Relations between the Allied troops and the local Arab population are not always warm. Incidents of thieving and pilfering by rowdy soldiers and light-fingered locals combine with racist assumptions to exacerbate tensions. A particularly unsavoury incident occurs today at the Palestinian village of Sarafand, south of Jaffa. Believing that one of their comrades had been murdered by Palestinian from the village, New Zealand troops first formed a cordon around Sarafand and then stormed the village. After driving out women, children and elderly men, the New Zealanders then set upon the remaining menfolk of the village with cudgels and bayonets. Several dozen Palestinians are killed, possibly more than a hundred.

Allenby, the British commander, is furious when he learns of the massacre. However, the New Zealanders and other nearby units refuse to co-operate with inquiries into the matter, making it impossible to identify the individuals responsible. The ANZAC murderers remain unpunished. 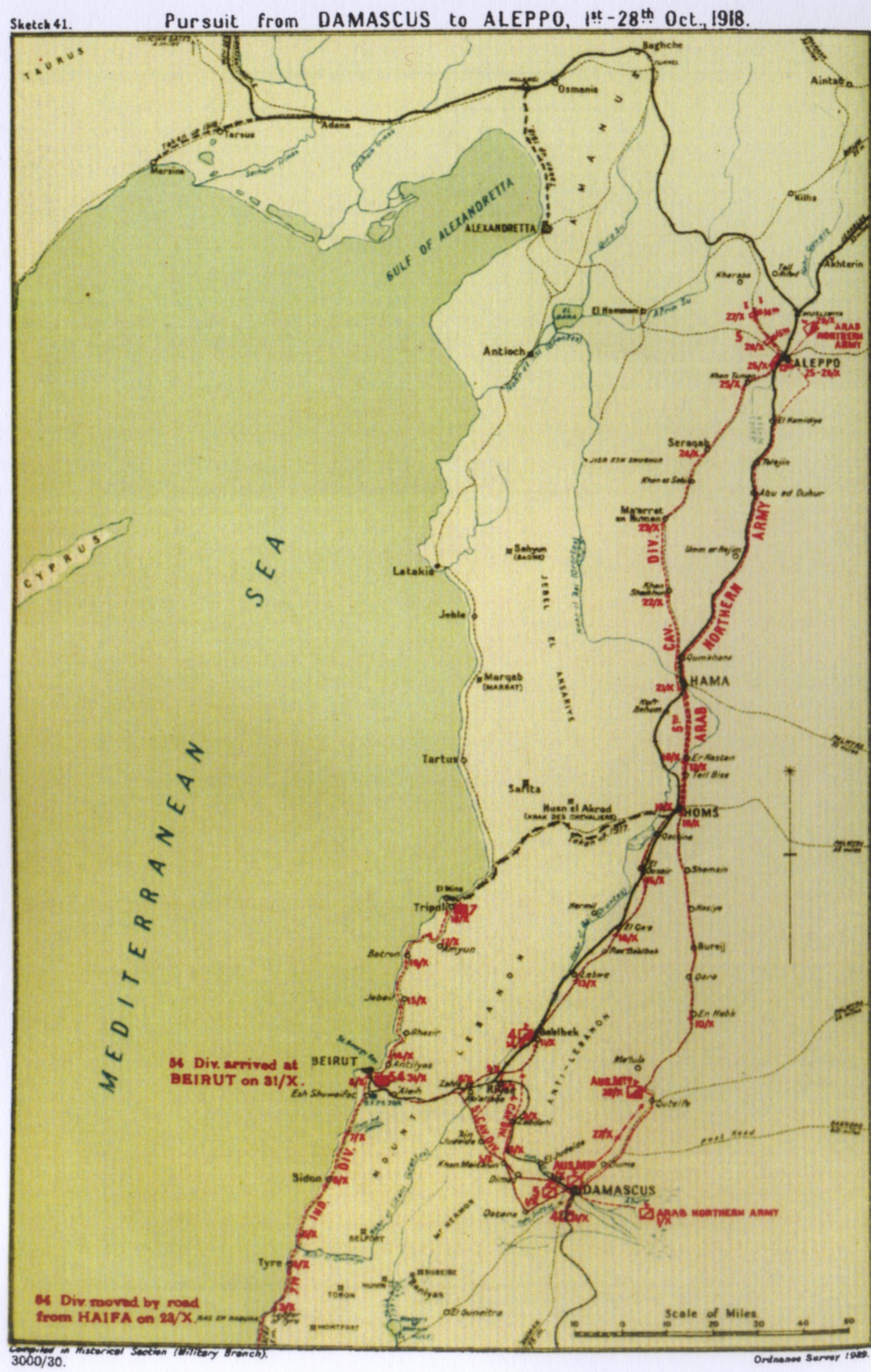 Separated from Germany and Austria-Hungary by the fall of Bulgaria, Turkey too is on the brink of requesting an armistice from the Allies. Meanwhile the Allied advance in Syria continues. Damascus has already fallen and now the British take Aleppo. From here they will be able to press on into Turkey’s Anatolian heartland should the war continue.

The pursuit from Damascus (Wikipedia)

The success of Allenby‘s offensive against the Turks has led to a collapse of their position in Palestine and Syria. Having cleared the Turks out of northern Palestine and seized the Transjordan town of Amman, British and Commonwealth forces are pressing on towards Damascus, the centre of Turkish power in the Levant. Also racing towards Damascus are Arab followers of Sharif Hussein of Mecca, self-declared King of the Arabs; these men are a mix of regular troops and Bedouin tribesmen who have attached themselves to the cause of the Arab Revolt. Hussein himself is an old man and has remained in southern Arabia, but his son Faisal is with the Arab army.

Sharif Hussein hopes to establish an Arab kingdom with Damascus as its capital; he knows that in the Sykes-Picot agreement the British have promised Syria to the French, but he hopes that if his followers can establish themselves in Damascus then facts on the ground will trump past agreements. Travelling with Faisal is the British liaison officer T.E. Lawrence, who is personally supportive of Arab ambitions versus those of the French.

In the end the first Allied troops to reach Damascus are a party of Australian cavalrymen who find that the Turks have abandoned the city. The leading citizens of Damascus have already taken down all Turkish flags and replaced them with emblems of Sharif Hussein. The British decide to hush up news of the Australians’ being the first into Damascus. For now the ambitions of Sharif Hussein and his son must be pandered to, so the British prepare for Faisal’s men to make a grand triumphant entrance to the city at which they will they formally receive the surrender of Damascus from the local notables.

Turkish forces in Palestine are in disarray following Allenby‘s successful offensive. Success on the coastal plain has allowed the British to make gains further inland. Success across the Jordan had proved elusive earlier in the year but now at last Allenby’s men take Amman.

Henry Wilson, the chief of staff of the British army, is pressing Allenby to exploit the Turks’ discomfiture by advancing with haste to Aleppo in northern Syria, from where Anatolia itself can be threatened with invasion. But Allenby is more cautious, fearing the consequences of an over-hasty advance (with the capture of Townshend‘s army at Kut in 1916 serving as a warning of the possible consequences of throwing caution to the wind). Nevertheless, he is not going to allow the Turks an opportunity to retreat and regroup. He is now preparing for his men to advance on Damascus, capital of Syria. The fall of this city will make clear to all that Turkish dominance of Arab lands has come to an end. 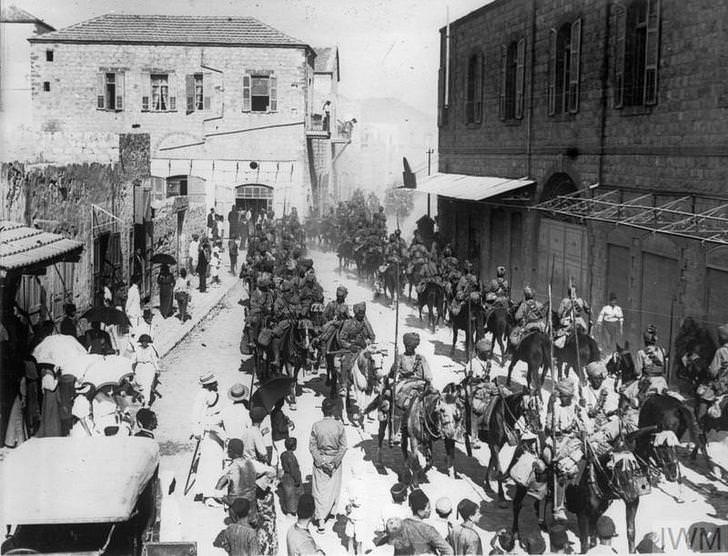 Allenby‘s offensive has shattered Turkish forces in Palestine. Haifa and Acre fall to Indian cavalry today and thousands of Turkish troops are surrendering to the British, their escape routes cut off by the rapid Allied advance.

Success in western Palestine means that Allenby is free to have another crack at Amman in the Transjordan region, where success has thus far eluded him. Now his men cross the Jordan once more and reoccupy the town of Salt, in preparation for another march on Amman. With Turkish forces in complete disarray Allenby hopes that this time Amman will fall to his men without difficulty.

Indian lancers in Haifa (100 Years Ago Today, @CenturyAgoToday on Twitter) 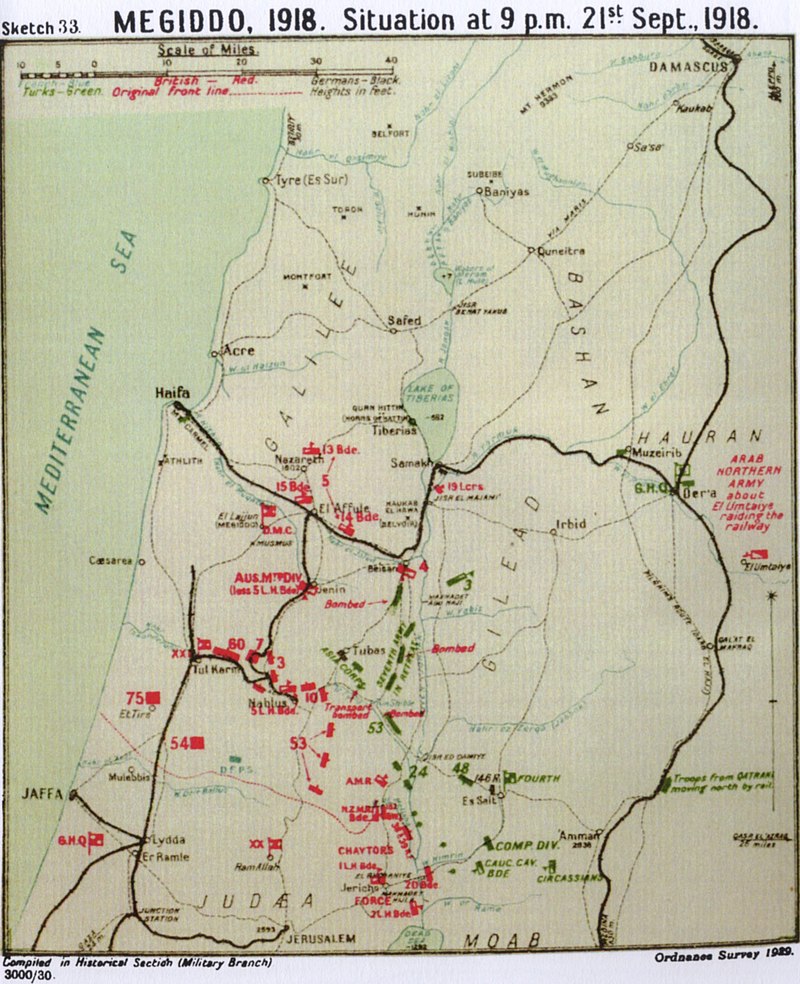 Allenby‘s offensive in Palestine is starting to look like a decisive victory. After the initial infantry assault smashed through the Turkish lines, Australian and Indian cavalry have exploited the victory and are pushing northwards at speed while the infantry wheels to the right to roll up the Turkish line. Many of the Turkish units in the path of the juggernaut have disintegrated. Retreating units are being relentlessly attacked by British and Australian aeroplanes.

Germany’s Liman von Sanders commands Turkish forces in Palestine. From his headquarters in Nazareth he is struggling to organise an effective resistance to the enemy. His efforts are hampered by a lack of accurate information as to the location of enemy and even his own forces, as his telephone lines have been cut.

Liman von Sanders’ confusion is underscored by the sudden arrival of enemy forces in Nazareth today. Liman von Sanders has to flee in great haste and is lucky to escape. The Allied advance is so rapid that Indian cavalrymen overrun a Turkish aerodrome at Nazareth, capturing both aeroplanes and their crews. By the end of the day the Allies have secured Nazareth as well as Nablus, with Jenin, Tulkaram and Megiddo already in their hands. 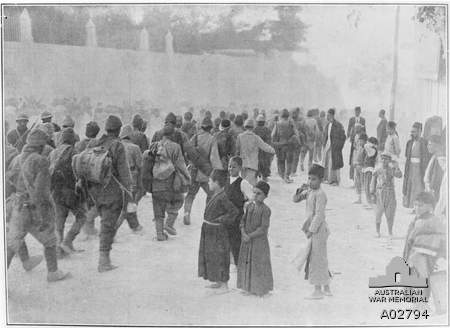 Turkish forces are expanding into the Caucasus, taking advantage of the collapse of Russian power there. This worries their German allies. The Germans have their own plans for the Caucasus and favour the establishment of pro-German client states in the region, not its absorption into the Ottoman Empire. They also fear that the Turks are putting too much resources into the Caucasus when the real danger is Allenby‘s British Empire and Commonwealth army in Palestine.

Allenby has launched a series of diversionary operations towards Deraa in Syria, with the assistance of the ever-growing regular forces of the Arab Revolt. Together with guerrilla operations by Arab raiders (assisted by British liaison officer T.E. Lawrence), these have convinced Liman von Sanders, commander of Turkish forces in Palestine, that Allenby is planning an attack in the Transjordan or Syrian regions. He transfers troops from coastal Palestine to reinforce Deraa.

The worst fear of the Germans are confirmed today. Allenby has in conditions of total secrecy concentrated a mighty strike force north of Jaffa. After a devastating artillery bombardment, the infantry attacks, forcing their way through the Turkish defensive lines on the coastal plain. The outnumbered Turks fight as best they can but are soon put to flight. And once the infantry is through the Turkish defensive positions Allenby is able to release his Australian and Indian cavalry to exploit the victory. As the cavalry surge forward towards the town of Megiddo, the cohesion of the Turkish army begins to collapse. Isolated units put up staunch resistance but others take to their heels, surrender, or exchange their uniforms for civilian clothes and abandon the army life.

Positions at start of the battle & at midnight on 19th/20th September (Wikipedia: Battle of Nablus (1918)) 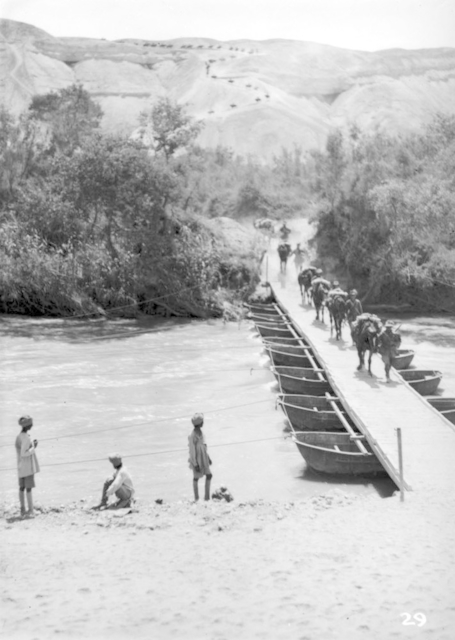 British and Australian forces have crossed the Jordan and established themselves in the town of Salt, preparatory to an attack on Amman. But the Turks are somehow wise to their plans, counter-attacking the Allies in great numbers. The British have been hanging but are in increasing danger of being cut-off and forced to surrender. Realising there is no longer any prospect of taking Amman, Allenby gives his men permission to withdraw. They slip back across the Jordan, abandoning Salt to the Turks.

The balance of forces in Palestine and Transjordan now seems to be moving in favour of the Turks. Allenby has to send his best troops to France, where they are needed to meet the German spring offensives. The failure at Salt has discredited the British, as has the publication by Soviet Russia of the Sykes-Picot agreement to partition the Middle East. With the Turks now in the ascendant they see a surge in enlistment from the Arabs of Transjordan as local notables send men to join the winners’ army.

In Palestine Allenby has been ordered to prepare his best troops for despatch to the Western Front, where they are needed to face Ludendorff‘s spring offensive. However the British general is determined to have one last crack at Amman in Transjordan before he has to go on the defensive. Today Australian and British troops cross the Jordan and secure the town of Salt, in preparation for an attack on Amman itself.

But then things begin to go wrong. German and Turkish forces materialise out of nowhere to launch an unanticipated counterattack of unexpected strength. Liman von Sanders, the German commander of Turkey’s forces in Palestine, has somehow got wind of Allenby’s plan, through treachery or the interception of British wireless messages.

The Australians and British find themselves heavily outnumbered and in danger of being cut off. Reinforcements are quickly sent across the Jordan to their aid, but there is no longer any prospect of capturing Amman: the expeditionary force is fighting for its survival. 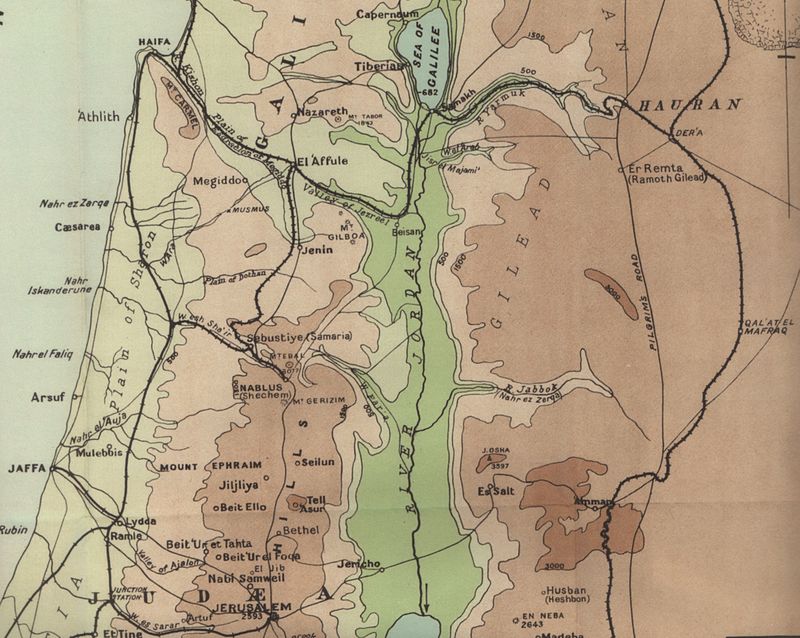 British Empire forces have been attempting to take Amman, which Allenby wants to secure before he is obliged to send his best troops off to the Western Front, where they are needed to help withstand Ludendorff‘s spring offensive. Back home in Britain people may think of the Middle East as a perpetually dry zone of aridity, but the last few days have seen the area around Amman buffeted by a series of rain storms. Conditions have been so poor that several of the British have died of exposure on the march.

After reaching Amman the British have been trying to storm the town. They have inflicted heavy casualties on the enemy but they have been unable to dislodge the Turks from their defences and have taken heavy casualties themselves. With there being no immediate prospect of the Turks throwing in the towel, the British decide to retreat. As they withdraw, closely pursued by the Turks, they are joined by the civilian population of the town of Salt. The people here had welcomed the British when they arrived last week. Now they fear the Turks’ vengeance and flee with whatever of their goods they can carry.

Refugees from Salt crossing the Jordan