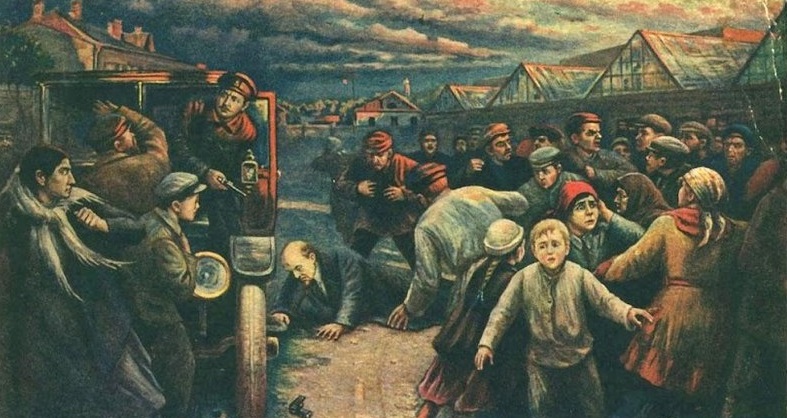 Bolshevik rule in Russia rests on shaky foundations. In Siberia the party’s writ is challenged by the Komuch government in Samara, whose Czechoslovak allies are a powerful military force. Meanwhile in southern Russia, Denikin has established himself in Novorossiisk in the Kuban region, from where his White Army represents a potent threat to Bolshevik power. But surely the Bolsheviks are secure in Moscow and Petrograd, the heartlands of the revolution?

Lenin certainly thinks so when he heads off today to urge some Moscow factory workers to remain unrelenting in their defence of the revolution. While there has been some industrial unrest in the big cities, the Bolsheviks have successfully faced it down and now face a more pliant workforce. The uprising by their erstwhile allies, the Left SRs, has been crushed. So Lenin should have nothing to worry about.

News of the assassination of Moisei Uritsky, Cheka commander in Petrograd, appears not to have engendered any caution on the part of the Bolshevik leader. Lenin’s nonchalance however proves almost fatal when, as he leaves the factory, a woman emerges from the crowd and produces a pistol. She fires three times at the Bolshevik and then attempts to escape.

Lenin is gravely hurt; his comrades fear that his death may be imminent. His would-be assassin meanwhile is apprehended and interrogated by the Cheka. She is Fanny Kaplan, a Socialist Revolutionary, who declares to her captors that she shot Lenin because he has betrayed the Revolution.

The Left faction of the Socialist Revolutionaries (the Left SRs) used to be allies of the Bolsheviks but now they are enemies. After murdering Count Mirbach, the German ambassador, the Left SRs have taken up arms and are calling on the masses to overthrow the Bolsheviks as betrayers of the revolution. Yesterday the situation hung in the balance, with Bolshevik forces in Moscow heavily outnumbered by the Left SRs, who controlled most of the armed militia of the Cheka, the political police.

But now the Left SR rising is over. The masses have failed to rally to the Left SRs while the rebels failed to capitalise on their temporary advantage by storming the Kremlin and arresting the Bolshevik leaders. Instead the uprising runs out of steam, with the Bolsheviks managing to round up Maria Spiridonova and other Left SR leaders (who have conveniently all gone to attend a meeting of the Soviet Congress without any armed guards) and muster enough forces of their own to oblige the surrender of the rebellious Cheka units.

With the Left SRs defeated, the Bolsheviks are once more secure in Moscow. Left SR supporters can now be purged from the Cheka and other Soviet bodies. The reformed Cheka will then be free to ensure there is no fresh challenge from the Left SRs or other disgruntled parties on the left.

The Bolsheviks in Russia are embattled, with counter-revolutionary forces threatening their rule across the country. The Czechoslovak Legion provides a particularly potent threat, controlling the Trans-Siberian Railway; working in alliance with the Komuch government in Samara they threaten to bring an end to Bolshevik rule. Vladivostok has fallen to the Legion, which they now proclaim to be an Allied protectorate. The Allies begin to think of using the port to aid anti-Bolshevik forces in Russia, with the ultimate aim of bringing the country back into the war against Germany. President Wilson goes so far as to suggest that Japan could send forces to secure Vladivostok, allowing the Czechoslovaks to redeploy further to the west.

But the Bolsheviks face other threats further to home. When the Bolsheviks seized power last November, they did so in alliance with the left faction of the Socialist Revolutionary Party (the Left SRs). However the Left SRs were not supportive of the Brest-Litovsk peace treaty with Germany, seeing it as a betrayal of the revolution. Left SR commissars resigned from Sovnarkom, the Soviet government, but the party remained broadly supportive of the soviet regime, a kind of loyal opposition. Since then they have become increasingly disenchanted by the Bolsheviks’ authoritarianism and their perception that the country is being transformed into a German client state.

Now the Left SRs decide to act. One of their activists assassinates Count Mirbach, the German ambassador, an act of propaganda by deed intended to ignite a general uprising of the masses against the Bolsheviks. When Dzerzhinsky, Lenin’s head of the Cheka (the political police), tries to arrest the murderers he is himself arrested: most members of the Cheka in Moscow are in fact loyal to the Left SRs rather than the Bolsheviks.

The Germans are understandably furious at the murder of their ambassador. Lenin is summoned to the German embassy where he issues a grovelling apology. His situation is now desperate. The Left SRs have far more armed men in the capital than he does: if they press their advantage the Bolshevik regime could find itself decapitated.

Fearing that the Germans will renege on the peace agreement and march on Petrograd, Russia’s Soviet government has removed itself to Moscow, safely in Russia’s interior, where Lenin and his fellow members of Sovnarkom install themselves in the Kremlin. The Bolshevik government nevertheless continues to rest on shaky foundations. Kornilov and Alexeev remain on the loose in south Russia, their Volunteer Army a serious thorn in the side of the regime. The Bolsheviks fear that other armed threats to their power could erupt into being at any moment.

Trotsky has been appointed as People’s Commissar for War, charged with turning the Red Army into an effective fighting machine. The Red Army’s fundamental problem is that it is an army of enthusiastic amateurs, a successor to the workers’ militias that took part in the recent revolution. It is in no state to take on a professionally organised fighting force.

Now Trotsky reveals his controversial plan for the reformation of the Red Army: officers of the former Tsarist army will be recruited in order to bring their military experience and training to bear. This shocks many of Trotsky’s Bolshevik comrades, who fear that the these officers will undermine the revolutionary character of the Red Army. They also suspect that the officers will be unreliable, more sympathetic to the cause of their former associates in Kornilov’s force than the Revolution. But the military threats to the Bolshevik regime concentrates minds; Trotsky has his way and the recruitment of the officers begins.

The position of the Bolsheviks in Russia is now more secure. The fighting in Moscow has come to an end with the defeat of the their opponents. In Petrograd Sovnarkom is taking over the organs of central government, breaking the civil servants’ strike that initially paralysed their administration. 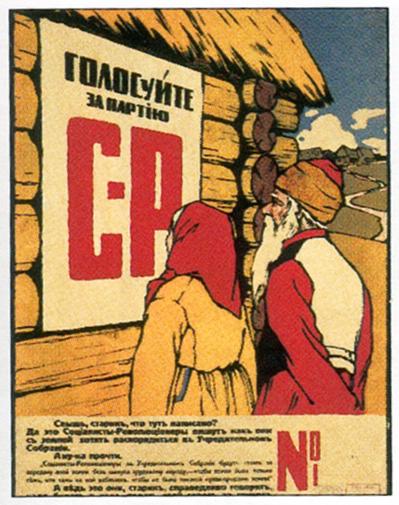 The Bolsheviks feel secure enough to allow voting to begin today to elect an assembly to draw up a constitution for Russia. The size of the country means that voting will take place on a staggered basis over the next two weeks. Elections to the Constituent Assembly kept being postponed by the Provisional Government, so much so that the Bolsheviks accused Kerensky of planning to cancel them completely. The still precarious nature of Lenin’s regime means that he must now go ahead with the elections.

The vote for the Constituent Assembly is the first democratic election in Russia’s history; even women are voting, something that is still only being considered in other countries. The problem with free elections of course is that people do not always vote in accordance with their objective class interests. Nevertheless, Lenin hopes that the Bolsheviks and their allies in the Left-SRs will win a majority, thereby vindicating his seizure of power.

The Bolsheviks have seen off Kerensky‘s attempt to overthrow their government in Petrograd. They are beginning to break the civil servants’ strike that hampered their takeover of the administrative organs of central government. And the military situation is also improving in Moscow, where anti-Bolshevik forces are now being pushed back relentlessly. Nevertheless, the Bolsheviks’ situation remains precarious and they are acutely aware that they could rapidly find themselves as impotent and marginalised as Kerensky’s Provisional Government was in its last days.

When the Bolsheviks established their Council of People’s Commissars (Sovnarkom), they declared it to be a Soviet government, responsible to the Soviet Executive. Now however Sovnarkom declares itself able to pass emergency legislation without the Soviet’s approval.The Soviet Executive votes narrowly to accept its effective marginalisation.

Within the Bolsheviks there is some disquiet at the direction the party is heading. Moderates, including Zinoviev and Kamenev, resign from the party’s central committee in protest at the suppression of the opposition press and Sovnarkom’s sidelining of the Soviet (Kamenev also resigns as chair of the Soviet Executive). None of this overly concerns Lenin. Let his moderate comrades have their protest; he knows they will come back into the fold soon enough.

Moscow scene (Russia Travel Blog: Moscow destroyed by the Bolsheviks in the autumn 1917) This link features some fascinating pictures of central Moscow in late 1917.

Lenin‘s Bolsheviks seized power easily in Petrograd but Moscow has proved a tougher nut to crack, with forces loyal to the ousted Provisional Government continuing to resist there. Even in Petrograd the rule of the Bolsheviks remains shaky, with a civil servants’ strike hampering Lenin’s commissars in their takeover of public administration while activists from other left parties grumble at the Bolshevik seizure of power.

Kerensky, the former prime minister, fled the capital as the Bolsheviks replaced his Provisional Government with Sovnarkom, the Council of People’s Commissars. He has found some loyalist troops and sends them to smash the Bolsheviks in Petrograd. But if there is a tide in the affairs of men it has well and truly gone out for Kerensky. A rising by anti-Bolshevik troops within Petrograd is easily suppressed and Kerensky’s force is blocked outside the capital by a revolutionary militia. Fearing that his soldiers will now hand him over to the Bolsheviks, Kerensky disguises himself as a sailor and flees.

The situation in Moscow also begins to improve for the Bolsheviks, with more of the city centre coming under their control. Perhaps Lenin’s government is not about to collapse after all. The world may soon see what a truly revolutionary regime guided by Marxism is able to accomplish.

Fighting in Moscow (Russia Travel Blog: Moscow destroyed by the Bolsheviks in the autumn 1917) This link features some fascinating pictures of central Moscow in late 1917.