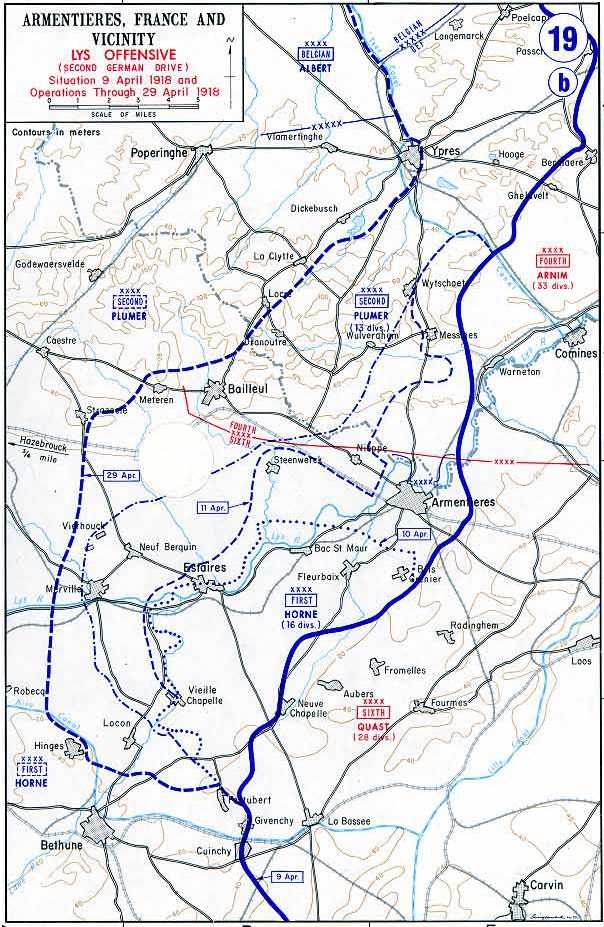 Ludendorff has been trying to win victory on the Western Front, attacking first in the Somme sector and now in Flanders. Exhaustion and mounting casualties are leading to a slackening of German efforts while reinforcements, particularly French reinforcements, have strengthened the Allied defence. Today the Germans make another push near Ypres, attacking French troops who have relieved their battered British allies. However, unlike at Kemmelberg, just a few days ago, the French hold firm. German gains are minimal.

Realising that no further gains are to be had, Ludendorff halts this phase of the offensive. The Allies have survived again but the Kaiser’s Battle continues. Ludendorff now ponders where to land the next blow. Time is however beginning to run against him. The fighting in the Somme cost the British some 178,000 casualties, the French 77,000 and the Germans 239,000. The Flanders offensive has cost the Allies another 118,000 casualties and the Germans some 95,000. But the Allies have greater reserves of manpower to draw on, particularly now that American troops are starting to arrive in France. Worse, the German casualties are concentrated among the elite stormtroopers and assault troops, the men Ludendorff can least afford to lose. The Germans need to win the war soon, before Ludendorff’s offensives destroy their army.

map (Wikipedia: Battle of the Lys) 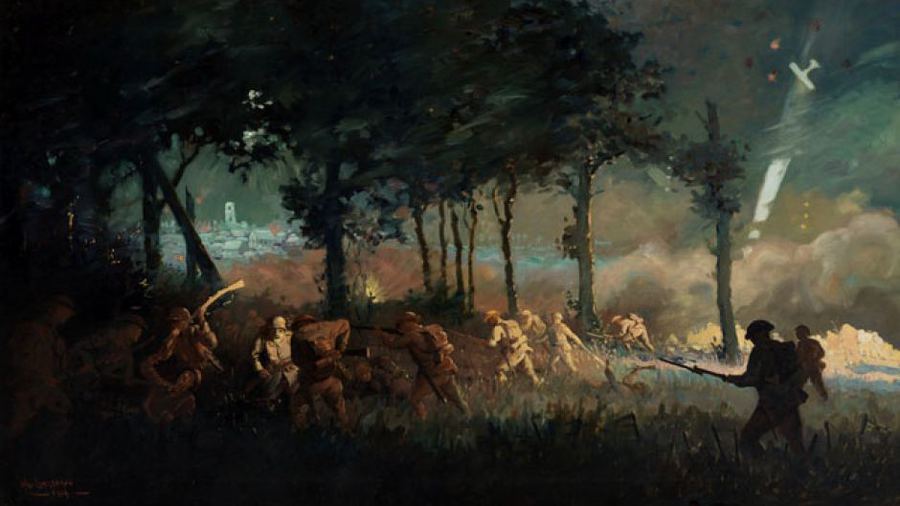 Yesterday in the Somme sector German troops captured the village of Villers-Bretonneux but their attempts to advance further where blocked in the war’s first tank versus tank battle. Overnight British and Australian troops counter-attack, first surrounding the village and then storming it. In brutal fighting most of the German defenders are killed, with a small number managing to surrender. Villers-Bretonneux is back in Allied hands, meaning that for now the railway hub of Amiens is safe from the enemy’s attentions.

The Germans have more success in Flanders, where Ludendorff‘s Georgette offensive continues to press against the British. Foch, now officially the Allies’ supreme commander, has sent French troops to strengthen the British line. Newly arrived French troops take over British positions at Mount Kemmel, near Ypres, but they find they have arrived in hell when they are subjected to a devastating artillery bombardment and gas attacks before elite German units move forward against them, supported by German aircraft. German troops take the hill and thousands of French troops lose their lives. The Kaiser is so pleased with the victory that he calls for champagne to toast his Kemmelberg heroes.

While German efforts in Flanders are continuing, there is a sense that the offensive here is running out of steam. The fighting has depleted the ranks of the German assault troops and the survivors are increasingly exhausted. Ludendorff has not helped matters by dispersing efforts against a number of targets: the transportation hub of Hazebrouck, the prestige target of Ypres (to whose outskirts the British have withdrawn) and the not particularly significant town of Bailleul. Meanwhile fresh troops are arriving to reinforce the British, including a large contingent of French troops.

German officers are noticing a fall in the morale of their men. With the spring offensive began with Ludendorff’s attack on the Somme, morale was high. The Germans believed that they were launching the offensive that would end the war. Now, a month on, the British still have not thrown in the towel and it is starting to look like the war will go on indefinitely.

There is another factor at play. Since Albert Gitchell took ill in early March the strain of flu that struck him down has spread across the world. It remains no more lethal than any other strain of influenza, but it is remarkably virulent. Somehow it has managed to cross the front lines and is afflicting men on both sides of the conflict, making them too ill for combat or anything else for up to a week. And it seems to be affecting German soldiers more, perhaps because of their poorer diets, robbing the German assaults of manpower at this crucial stage of the battle.

Ludendorff’s Georgette offensive in Flanders has brought German troops to within six kilometres of Hazebrouck, the transportation hub on which the supply of British troops in this sector depends. Perhaps a determined assault might take it, forcing the collapse of the Allies in Flanders, but as with his first offensive at the Somme, Ludendorff chooses to disperse his forces, ordering his men to also attack the less crucial target of Bailleul. And Ludendorff turns his gaze towards Ypres, further to the north, thinking that if this prestige target were to fall then the morale of the British would be shattered.

In this regard the British are ahead of him. They fear the consequences of Ypres’ capture now after all the blood that has been spent in its vicinity during the first, second and third battles there. To maximise their chances of holding it they withdraw now in secrecy to strongly fortified positions just outside the town. This means that they are giving up the shattered village of Passchendaele, whose capture last year was secured at an enormous cost in lives.

German attacks in Flanders, codenamed Operation Georgette, have shaken the British. With his men closing in on the transportation hub of Hazebrouck, Ludendorff hopes that a further push will lead to a British collapse. Recognising the gravity of the situation, Haig now issues a special order of the day to his men. He salutes their fortitude and boldly claims that the German drive is being contained, but nevertheless he recognises that the hour of crisis has arrived.

“Many amongst us now are tired. To those I would say that Victory will belong to the side which holds out the longest. The French Army is moving rapidly and in great force to our support.

“There is no other course open to us but to fight it out. Every position must be held to the last man: there must be no retirement. With our backs to the wall and believing in the justice of our cause each one of us must fight on to the end. The safety of our homes and the Freedom of mankind alike depend upon the conduct of each one of us at this critical moment.”

In truth the tide is beginning to move in favour of the British. More British and Australian units are arriving to bolster their defences while Foch has indeed agreed to release French troops to support them. The German troops meanwhile are increasingly exhausted and worn down by the fighting. But Ludendorff orders his men to press on. Like Haig he believes that victory will come to the side that can endure the most, and he believes that side is his own.

The recent attacks on the Somme was only the first phase of the German spring offensive. Now, on Ludendorff‘s 53rd birthday the second phase begins, with German stormtroopers attacking south of Ypres in Flanders after the customary intense artillery bombardment. Victory here could throw the British into the sea, leaving the French to face the Teutonic juggernaut alone.

Some of the German assault troops find themselves attacking Portuguese troops thinly spread on what was meant to be a quiet sector of the line. The Portuguese collapse, allowing the Germans to surge forwards. Supposedly better prepared British troops are also thrown back in disarray. German troops advance up to 10 kilometres in some areas, threatening the transportation hub of Hazebrouck. The Germans capture an impressive bag of enemy prisoners but not everything goes their way, with a British division at Givenchy at the southern end of the line resisting all efforts to dislodge it. Nevertheless, today’s successes have shaken the British and dangle the prospect of a final decisive victory in front of the Germans.

The rise of Ferdinand Foch continues. He is now coordinating US troops on the Western Front, as well as those of Britain and France. At the moment there are not so many American soldiers in France and those there are still not ready for combat, but their numbers are growing all the time. Assuming the German offensive does not end the war in the immediate future then eventually the Americans will be playing a decisive part in the fighting.

The German offensive in the Somme sector is now focussed on attacking towards Amiens, a transport hub for the Allies. Standing in the Germans’ way is the smaller town of Villers-Bretonneux; if this falls then they will be able to press on to Amiens or shell it to destruction. But the Germans are unable to make headway against determined resistance by British and Australian troops.

The Germans will try again tomorrow but Ludendorff is faced with the uncomfortable realisation that Operation Michael, his offensive in the Somme sector, has probably failed, notwithstanding its initial gains. But no worry. Operation Michael was just the first phase of the spring offensive. In the next few days the next phase will begin, Operation Georgette in Flanders. The Allies were barely able to resist the Somme offensive: Ludendorff hopes that Georgette will destroy the enfeebled British army.