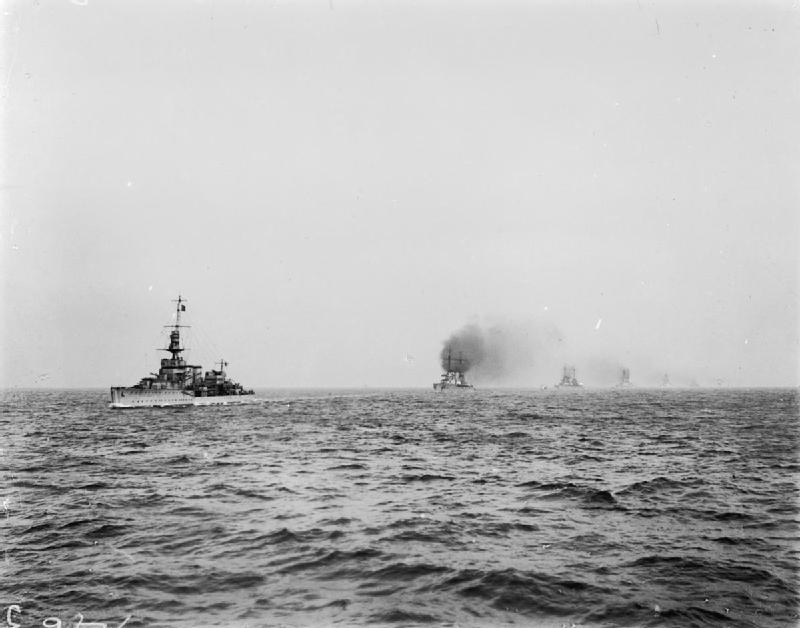 Under the terms of the armistice the German fleet is to be interned by the Allies. The U-boats have already sailed to Harwich in England and now today the German surface fleet sails to the Firth of Forth in Scotland, from there to travel on to the main British naval base at Scapa Flow in the Orkneys. Unlike the U-boats, whose crews were returned to Germany, the surface ships will retain their German crews while they are in Scapa Flow; although effectively under British confinement they will not be prisoners-of-war as such and the sailors will remain under their own command. 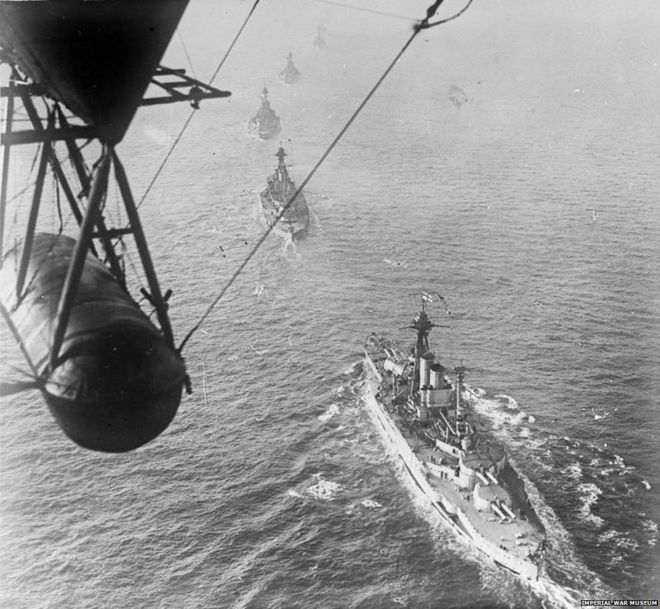 The German fleet sails under the command of Rear-Admiral Ludwig von Reuter; Admiral Hipper, the fleet’s commander-in-chief, delegated the distasteful task of leading the fleet into captivity. The German ships are escorted by the main British battle fleet, making this the largest gathering of warships the world has ever seen. The two fleets clashed just once at the inconclusive Battle of Jutland in 1916 but since then the British navy has grown further in size and now it is joined by French and American warships, meaning that the Allies now have 23 battleships to the Germans’ nine and nine battlecruisers to the Germans’ five. The whole exercise is a spectacular show of strength by the British, with the German fleet sailing between two lines of Allied ships, either of which would be a match for them. 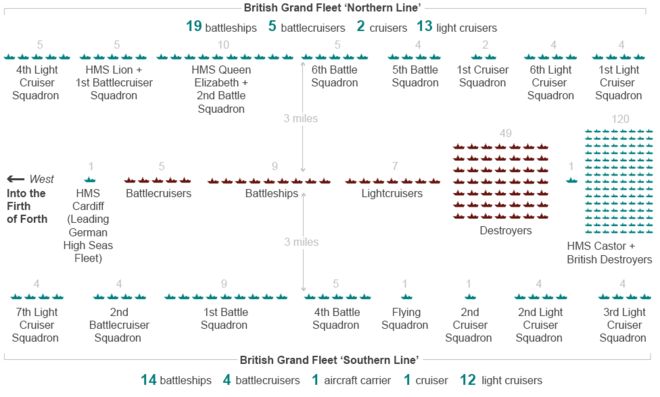 The British fleet is commanded by Admiral David Beatty, who had commanded the battlecruisers at Jutland. His ships are prepared for any last minute tricks by the Germans: all guns are ready for action, with gun crews in place and ammunition ready to be loaded. But there is no need. The German navy knows it has been beaten and its sailors are not in the mood for suicidal gestures. Without a shot being fired the goal that eluded Beatty at Jutland is now being achieved: the neutralisation of the German fleet. 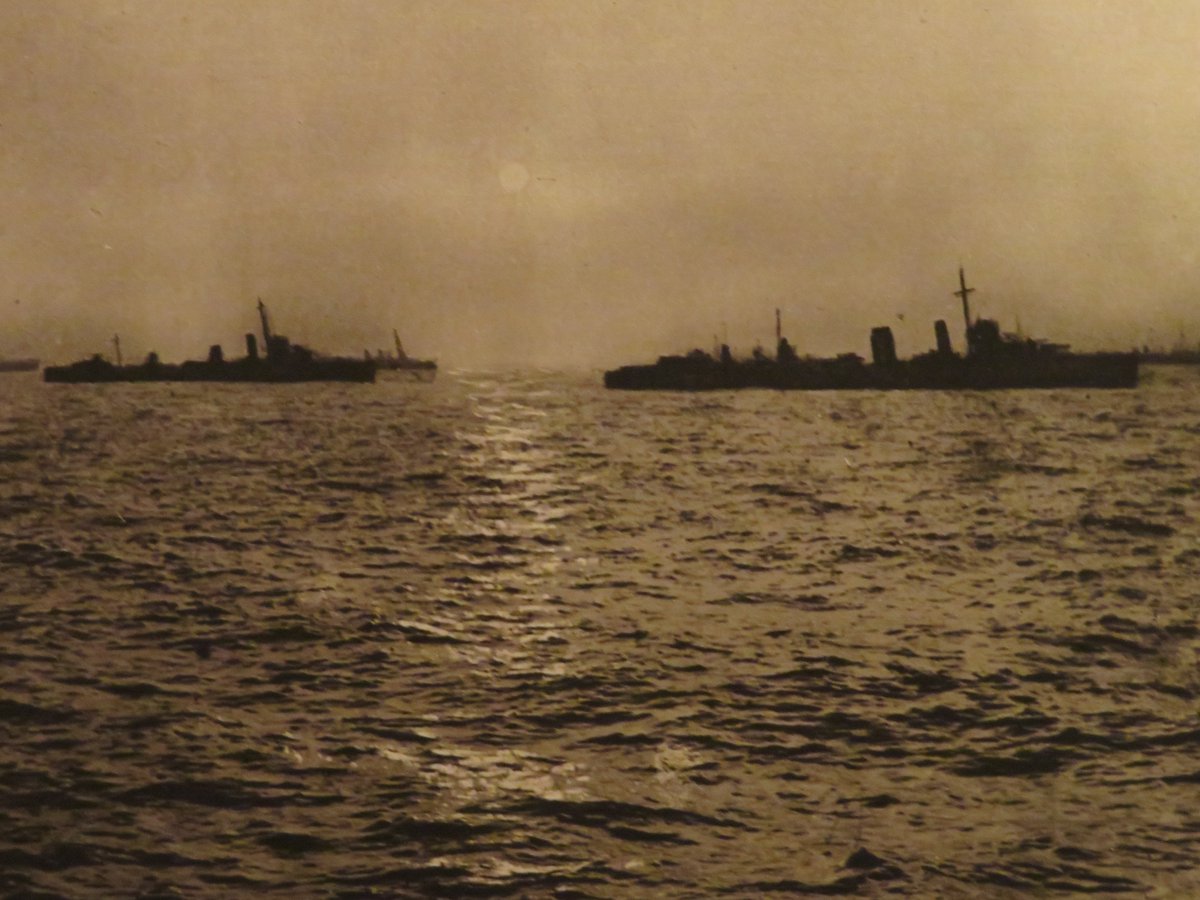 See also fascinating Twitter thread from Spitfires of the Sea

In the North Sea to the west of Jutland the British battlecruiser squadron under Admiral Beatty is running north, hotly pursued by the main German fleet. If the Germans can catch and destroy the British they will have shifted the naval balance decisively in their favour. But Beatty is leading them into a trap. The main British fleet under Admiral Jellicoe is steaming south to join the battle.

Admiral Scheer commands the German fleet. Just when he thinks he has caught up with the battlecruisers he realises the deathly danger he is in. He is sailing straight towards the main British fleet, whose ships are lined up to fire all their guns upon him. However, visibility is poor. He reacts quickly, ordering his ships to make an about turn before the British capitalise on their advantage.

In the bad light of the early evening the two fleets now bumble around, the Germans hoping to escape and the British hoping to catch them. A second time the Germans find themselves sailing towards the entire British fleet, but again they manage to about turn before they are obliterated. Finally night falls.

Under cover of darkness the Germans slip away. Jellicoe is happy to let them go, as he does not want to risk his fleet in a chaotic night action. The two fleets head for home.

The largest naval battle in history is over. British losses are greater, with over 6,000 men killed and three battlecruisers sunk, while the Germans have suffered more than 2,500 men killed and lost one battlecruiser and an obsolete battleship; both sides have lost several smaller ships. However, neither side has landed a killing blow and Britain continues to enjoy the naval dominance it had before the clash. 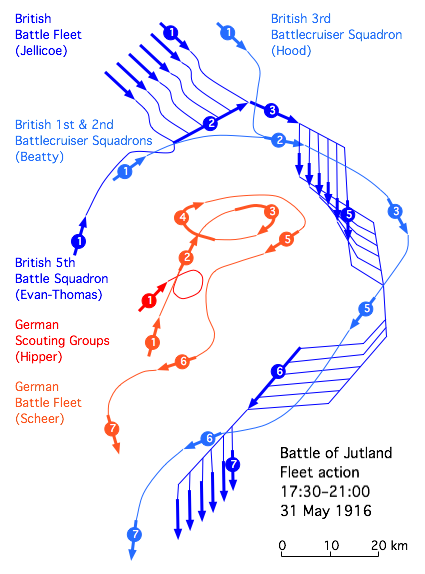 The overall British commander is Admiral Jellicoe. He is cautious, knowing that if his fleet is defeated it could hand victory in the war to the enemy. But Admiral Beatty, his subordinate and the commander of the British battlecruiser squadron, is more daring. He dreams of a glorious victory like that of Nelson at Trafalgar, one that would eliminate the threat posed by the German fleet.

North west of Jutland, a British cruiser encounters the German battlecruiser squadron. Beatty’s squadron raises full steam and races to engage the Germans, leaving behind the rest of the British ships. The German battlecruisers retreat before Beatty’s superior force. A race south then ensues, with the two squadron’s trading fire as they go. German gunnery appears to be superior. “There seems to be something wrong with our bloody ships today”, Beatty exclaims, when enemy shells cause a second of his battlecruisers to explode.

Then Beatty’s squadron finds that the German battlecruisers have led them to the main German fleet. Rather than face battle on disadvantageous terms. Beatty orders his ships to make an about turn. The Germans chase him northwards, not realising that they are rushing towards the massed guns of Jellicoe’s dreadnoughts. 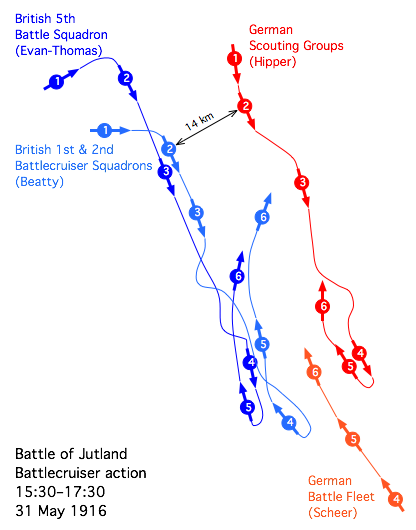 Control of the sea means that British boats are able to work the rich fishing ground of the North Sea’s Dogger Bank. This irks the Germans, who suspect that these fishing boats are spying on their fleet’s movements. Today they send a small force headed by three battlecruisers to the Dogger Bank to attack the British fishermen and show that Germany has not conceded British control of the North Sea. Unfortunately for the Germans, the British have cracked their naval radio code and know what they are up to. Britain sends a larger squadron under Admiral Beatty to ambush the enemy. When the two squadrons meet, the Germans realise they are badly outnumbered and turn for home with the British in hot pursuit. The British score a hit on the Blücher‘s boiler room, setting the ship ablaze and causing it to lose steam. The rest of the German ships escape, partly because the British are afraid of U-boats, but the Blücher is pounded by shellfire and eventually sunk by a torpedo. The sudden appearance of a German Zeppelin causes British ships to flee rather than pick up survivors from the Blücher; at least 800 sailors lose their lives. The British navy is pleased with its victory, ignoring less appealing aspects of the battle (such as the much slower rate of fire by the British ships). On the German side, the event is disconcerting, as it illustrates again the naval dominance of the enemy. The Kaiser orders that the fleet is to make no more risky forays into the North Sea. He starts thinking about replacing Admiral Ingenohl, the German navy’s risk-seeking commander.

The Germans register that it cannot be just coincidence that they keep meeting British ships when they go out into the North Sea. However they do not suspect the enemy of having broken their wireless codes; rather they assume that there must be spies operating in the vicinity of the fleet’s base in Wilhemshaven.

Positions in the battle (Wikipedia)

The Blücher rolling over (Wikipedia)

In the early hours of the morning, anyone looking out to sea at Scarborough, Whitby or Hartlepool would be surprised to see warships approaching out of the mist. They are the German battlecruisers of Admiral Hipper. Once they are close enough, they open fire, pounding the largely defenceless British towns. There is little of a military nature on the receiving end of their shells. The bombardment blasts hotels, private houses, a bank, and even at Whitby the ancient abbey. The shelling causes the first civilian war deaths in England since the 17th century.

The British are basing their actions on faulty intelligence. Hipper’s battlecruiser squadron has attacked the coast but the rest of the German fleet is there supporting it. Thinking they are just facing the German battlecruisers, the British have left most of their fleet in port. They do not realise it, but Warrender and Beatty are greatly outnumbered. If they meet the full enemy fleet they will be destroyed. But the Germans do not realise their advantage. When they begin to encounter British ships, they fear that the entire British fleet is facing them and retreat away. The British try to force a battle, not realising their weakness, but in the rough seas and heavy weather they are unable to maintain contact with the enemy. The Germans slip away home, missing a chance for a possibly war-winning victory.

In Britain, the German navy’s attack on civilian targets causes outrage and is exploited for propaganda purposes. But there is also criticism of the British navy, for its failure to prevent the raid.

The Bombardment of Whitby, by William Scott Hodgson, from BBC website Your Paintings

The British have more warships than the Germans. They also have another advantage. Intelligence officers at the Admiralty have successfully cracked the code used by the German navy for its wireless communications. Today they listen to German radio transmissions and make an astonishing discovery. The German battlecruiser squadron will tomorrow be putting to sea, to attack targets on the British east coast.

The British see this as a great opportunity. They plan to send a force of their own to block the Germans’ return home from their raid. Destruction of the German battlecruisers will guarantee Britain’s dominance of the sea.

Elements of the British and German fleets clash in the Heligoland Bight, off Germany’s north sea coast. The battle begins as an action between small ships but the British eventually bring up the battlecruiser squadron of Vice Admiral Beatty. The battlecruisers sink some German light cruisers and damage a few others. Beatty is hailed as a hero on his return to Britain.