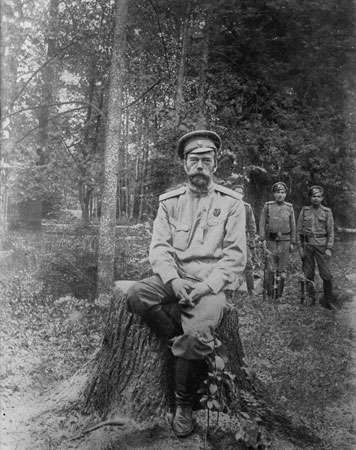 Before the revolution the Tsar wielded absolute power in Russia, at least in theory. His life and that of his family was one of gilded luxury. After his abdication the imperial family were held in conditions of genteel house arrest, continuing to enjoy privileges undreamt of by their former subjects. However the Tsar remained deeply unpopular with the revolutionary public and there were fears for his life if he remained in Russia. During his premiership, Kerensky tried unsuccessfully to arrange for the Tsar to go abroad into exile. However a tentative offer of asylum in Britain was withdrawn following objections by King George V, who feared that his cousin’s arrival would ignite revolutionary sentiment. Other countries declined to take the Tsar for their own reasons.

To protect them from the Petrograd workers, Kerensky moved the imperial family to Tobolsk in Siberia, where they continued to live in comfortable conditions. However, since the October Revolution the situation of the imperial family has deteriorated. They have been denied luxuries and put on more basic rations. Their guards have become more surly. There is increased talk of putting the Tsar on trial.

In truth, the Bolsheviks are not sure what to do with the Tsar. Trotsky favours a show trial in Moscow, with himself as the prosecutor; others are not so sure. In the meantime the Tsar and Tsarina are transferred to a new place of incarceration in Ekaterinburg. They arrive today and are greeted by an angry mob before being taken to the House of Special Designation, the commandeered home of a local businessman. Their son and daughters will join them later.

The House of Special Designation (Wikipedia)

Lenin‘s Bolsheviks seized power easily in Petrograd but Moscow has proved a tougher nut to crack, with forces loyal to the ousted Provisional Government continuing to resist there. Even in Petrograd the rule of the Bolsheviks remains shaky, with a civil servants’ strike hampering Lenin’s commissars in their takeover of public administration while activists from other left parties grumble at the Bolshevik seizure of power.

Kerensky, the former prime minister, fled the capital as the Bolsheviks replaced his Provisional Government with Sovnarkom, the Council of People’s Commissars. He has found some loyalist troops and sends them to smash the Bolsheviks in Petrograd. But if there is a tide in the affairs of men it has well and truly gone out for Kerensky. A rising by anti-Bolshevik troops within Petrograd is easily suppressed and Kerensky’s force is blocked outside the capital by a revolutionary militia. Fearing that his soldiers will now hand him over to the Bolsheviks, Kerensky disguises himself as a sailor and flees.

The situation in Moscow also begins to improve for the Bolsheviks, with more of the city centre coming under their control. Perhaps Lenin’s government is not about to collapse after all. The world may soon see what a truly revolutionary regime guided by Marxism is able to accomplish.

Fighting in Moscow (Russia Travel Blog: Moscow destroyed by the Bolsheviks in the autumn 1917) This link features some fascinating pictures of central Moscow in late 1917.

In the early hours of the morning the Bolshevik central committee meets. Yesterday’s failed crackdown by Kerensky has swung the Bolshevik leaders behind Lenin‘s call for an immediate seizure of power. As the day progresses troops and militia loyal to the Bolsheviks fan out across Petrograd and seize key points. By the evening the Provisional Government remains in the Winter Palace, surrounded by revolutionary troops and defended by an ever-dwindling band of loyalists.

The All-Russian Soviet Congress is meeting in Petrograd. It appears to be in favour of formation of a Soviet government, but one representing all revolutionary parties. But a walk-out by the Mensheviks and right faction of the Socialist Revolutionaries (SRs) leaves the Bolsheviks with a clear majority, thanks to the support of the left faction of the SRs. Trotsky scoffs at those who have walked out, consigning them to the “dustbin of history”.

In the Winter Palace, shelling from a Bolshevik gunboat causes the collapse of loyalist resistance. The Bolsheviks storm the building and arrest the Provisional Government, but not Kerensky who has somehow slipped out of the city. The former ministers are thrown into the cells of the Peter & Paul Fortress used previously to house the Tsar’s enemies.

While all this is happening the normal life of the city remains curiously unaffected. The trams continue to run and shops and theatres remain open. Opera performances take place that evening and upmarket restaurants continue to serve their clients, though the journalist John Reed reports being asked to move to a dining room at the back of his hotel for fear of stray bullets coming in the front.

Nevertheless, the Bolsheviks have now seized power, in Petrograd at least. They call their government the Council of People’s Commissars, abbreviated in Russian to Sovnarkom. 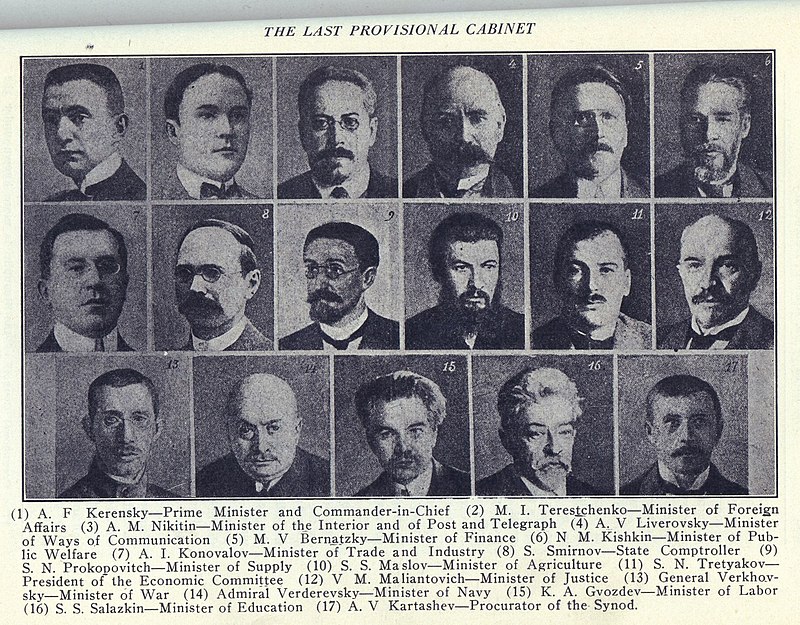 Kerensky seems powerless to stop the rising influence of the Bolsheviks. Verkhovsky, the war minister, has suggested that he seek an immediate peace with the Germans, undercutting the Bolsheviks whose demand for an end to the war has struck a chord with many. But Kerensky is determined to keep Russia in the war, despite the increasing inability of the army to fight the Germans.

Kerensky’s dwindling band of supporters have urged him to strike back against the Bolsheviks, decapitating them before they can seize power. Now he finally accedes to their request, ordering the suppression of the Bolshevik press and the arrest of their leaders. But Kerensky’s weakness is now all too apparent: he simply does not have the forces at his disposal for an effective crackdown. The men he sends to the Bolshevik printing presses are soon chased away by revolutionary troops. His hunters are unable to locate Lenin or the other leading Bolsheviks. And in the tumult that follows, Kerensky’s men lose control of two of the bridges into central Petrograd.

For the Bolsheviks, Kerensky’s attempted crackdown focuses minds. The party’s leadership had agreed in principle to a seizure of power at some unspecified point in the future. Now they realise that the time to strike is now.

German forces have staged an amphibious landing on the islands of Estonia, outflanking Russian forces defending the approaches to Petrograd. Now the Russians abandon the city of Revel (known to the Estonians as Tallinn), fearing that it has become untenable.

Revel was the last bastion between the Germans and Petrograd. With the Germans threatening the capital, the Provisional Government investigates evacuating itself and key industries to Moscow. But to the Petrograd Soviet and the revolutionary activists in the city, it looks suspiciously like Kerensky’s government is planning to hand them over to the Germans. Perhaps Kerensky would prefer to let the Germans deal with the unruly city.

Kerensky wonders what to do (1917 portrait by Isaac Brodsky) (Spartacus Educational: Alexander Kerensky)

Things are just not going Kerensky‘s way. Russia’s prime minister has survived the attempted coup by Kornilov, the man he appointed to lead the army, but since then he has struggled to control events. Their role in resistance to Kornilov has rehabilitated the Bolsheviks: with the July Days unpleasantness now forgotten, Bolshevik leaders have been released from jail and there is even talk that Lenin may return to Petrograd from wherever he is hiding. Meanwhile the various armed popular committees that sprang into being to oppose Kornilov are refusing Kerensky’s orders to dissolve themselves, as is the revolutionary sailors’ committee in the Baltic Fleet.

In an attempt to revitalise his fortunes, Kerensky now reforms the Provisional Government. His latest cabinet has a majority of socialists, but the key posts are occupied by Kadets (Constitutional Democrats). Before the revolution the Kadets were considered dangerous radicals working to undermine Tsarist autocracy, but now the wheel has turned so far that to many they are sinister reactionaries, tainted by their reputed association with Kornilov’s failed coup. Kerensky’s continued fondness for including the Kadets in government further undermines his support amongst the workers’ organisations that had once enthusiastically backed him.

While Kerensky tries to reassert his authority political developments continue elsewhere. The executive of the Petrograd Soviet resigned after the council of workers and soldiers backed a Bolshevik resolution calling for a government responsible to it. Now a new executive is formed with a Bolshevik majority, headed by Leon Trotsky, the recently freed Bolshevik firebrand. The executive rejects Kerensky’s government and calls once more for a Soviet government.