Once Russia signed a peace treaty with the Central Powers it was inevitable that Romania would follow suit. Most of Romania was overrun in 1916 after its leaders joined the Allies, with only Bessarabia in the east remaining unoccupied. Without Russian help it was no longer possible for the Romanians to fight on. After agreeing an armistice last December, today the Romanians sign a peace treaty with the Central Powers near Bucharest.

The terms are harsh. Romania is obliged to cede territory to Austria-Hungary and Bulgaria. The remainder of the country becomes little more than a German client state, its oil industry and railways placed under German control and the country obliged to supply its agricultural surplus to the Central Powers. Romanian trade is now tied to Germany through its forced membership of a customs union.

As with Brest-Litovsk, the Treaty of Bucharest serves to remind the western Allies of the kind of terms they can expect if they are forced to make peace with Germany.

Germany detached Ukraine from Russia in the Treaty of Brest-Litovsk. The Germans also negotiated a separate deal with the Rada government of Ukraine, supplying German troops to guarantee their security in return for shipments of grain. Unfortunately for the Germans, the Rada’s ability to extract grain for Berlin has proved less impressive than expected. Peasants have resisted Rada attempts to requisition grain and something akin to an agrarian insurgency has developed in the country. The Rada seems unable to maintain order. In response the Germans overthrow the Rada and install Pavlo Skoropadsky as the new leader of Ukraine. A former general in the Tsarist army, Skoropadsky takes the title of Hetman and will head a pro-German puppet regime. Maintaining Skoropadsky in power will mean that large numbers of German and Austro-Hungarian troops will have to be stationed in Ukraine for the foreseeable future, preventing them from taking part in Ludendorff‘s spring offensives on the Western Front. 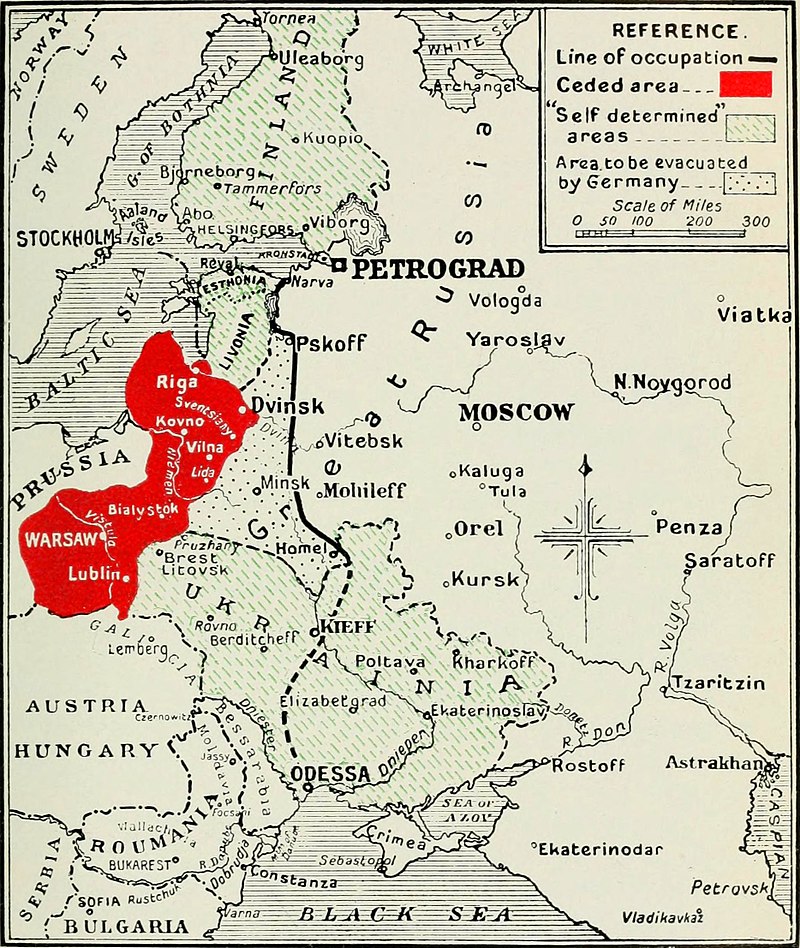 Germany’s unstoppable advance in the East has forced the capitulation of Soviet Russia. Today a Soviet delegation signs a peace treaty with the Germans at Brest-Litovsk. The terms are harsh. Poland, Ukraine, Belarus, Estonia, Lithuania and Latvia are all detached from Russia, notionally independent but effectively German colonies.Russia has lost a third of its population, more than half its industry and nearly 90% of its coal mines. Russia has also lost much of its railways and sources of iron ore, as well as the rich agricultural lands of Ukraine. Within Russia itself the treaty grants privileges to Germans: their businesses are immune from nationalisation or other interference by the Bolshevik regime. And Russia must pay an indemnity to the Germany. 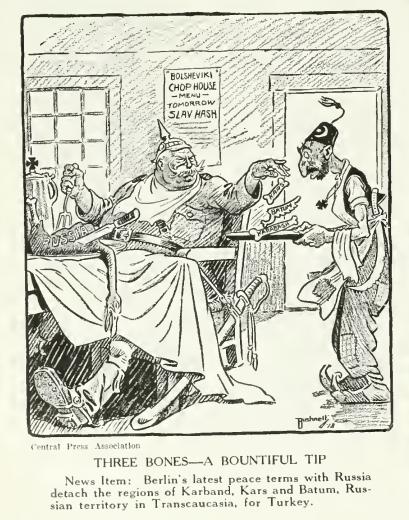 Germany has done well out of the treaty, acquiring both the territories in the East it has already overrun and effective control of Ukraine. Austria-Hungary has done less well, having to make do with promises of a share of the grain to be extracted from Ukraine. The other beneficiary of the treaty is Turkey. Russia is obliged not merely to withdraw to its frontiers from before the war but also from the three provinces of Kars, Batum and Ardahan it gained from Turkey in 1878. The future status of the three provinces is to be determined by plebiscite, but one to be conducted by the Turks. Turkish forces are now pushing eastwards to not merely occupy the territory they are being awarded at Brest-Litovsk but as much of Transcaucasia as they can.

Acceptance of the Brest-Litovsk treaty is controversial within Russia. Many leading Bolsheviks oppose the treaty while the support of Trotsky is lukewarm at best (he has resigned as foreign minister to avoid having to sign it himself). The Left faction of the Socialist Revolutionaries, the Bolsheviks’ coalition partner, sees the treaty as turning the country into a German client state; so incensed are the Left SRs that their ministers resign from Sovnarkom (Soviet Russia’s government). But Lenin sees peace as essential to give socialism the breathing space it needs in Russia. With time revolution will spread across Europe, negating the treaty.

For Germany the treaty’s signature is a relief. Grain from Ukraine should alleviate the country’s food problems. And crucially it stops the country’s leaders from having to worry about the Eastern Front. Ludendorff is now free to concentrate on the great offensive he is planning in the West.

After Trotsky walked out of the Brest-Litovsk peace talks the Germans and Austro-Hungarians launched Operation Faustschlag, an offensive intended to force the Bolsheviks to accept their draconian peace terms. Their advance has faced little or no resistance, in a short time making gains that would have been unimaginable even a year ago. Meanwhile the Turks too are advancing unopposed into territory seized from them earlier in the war. Today the Turks arrive in Trebizond, where a Russian army brass band plays to welcome them into the city.

Yesterday Germany communicated its final peace terms to the Russians. The Germans are now demanding all the territory captured since the start of Operation Faustschlag, which means that Estonia will now be theirs as well as Poland, Lithuania, Latvia and much of Byelorussia. Ukraine is also to be separated from Russia, notionally independent but effectively a German client state.

In Petrograd Lenin argues that if the German terms are rejected then even worse ones will be forced on Russia in a few more weeks, ones so draconian they could spell the end of Bolshevik rule. By threatening to resign he secures Trotsky’s abstention at the Bolshevik central committee, which votes to accept the peace, though Bukharin and his faction then resign in protest. The Soviet Executive then approves the peace proposals by 116 to 85 votes, with Left SRs and many of Lenin’s own party shouting “Judas!” at him.

Early today Lenin sends to the Germans an unconditional acceptance of their terms.

Germany and Austria-Hungary are meeting no effective resistance in their offensive against Soviet Russia. The advancing troops are able to move forward by train, stopping at each station to arrest the local Bolsheviks before moving on to the next. In just five days they have moved forward some 150 miles. 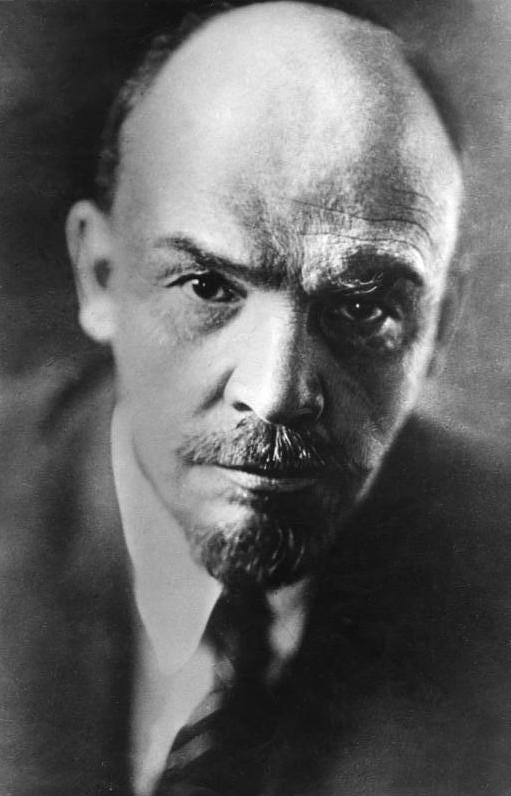 In Petrograd the enemy advance has caused chaos within the ruling Bolsheviks. One faction wants to wage revolutionary war against the Germans, though Soviet Russia’s lack of an effective military force makes this a somewhat unrealistic strategy. In a stormy meeting of the party’s Central Committee, Lenin managed to secure a majority in favour of accepting the German terms by persuading Trotsky to switch sides. He cabled his acceptance to the Germans but the Germans do not reply and continue their advance.

What now? In desperation Lenin changes tack and backs armed resistance to the Germans. But Soviet Russia’s Red Army is a pathetic militia, in no state to take on the enemy. In desperation the Bolsheviks appeal for help to the Allies, despite the opposition of those like Bukharin who fear the consequences of trucking with imperialists. The Allies meanwhile welcome the Bolsheviks appeal for help and withdraw their support for Kornilov‘s anti-Bolshevik army in southern Russia.

At Brest-Litovsk Trotsky shocked the Germans by rejecting their harsh peace terms but then informing them that Russia will fight them no more. The Bolsheviks hope that this ‘No War, No Peace‘ strategy will expose the Germans as naked aggressors if their army resumes its advance in the east, triggering revolution from Germany’s war weary working class.

Ludendorff is Germany’s Quartermaster General and the effective dictator of his country. He does not care about being seen as a naked aggressor; he wants the war in the East brought to an end as soon as possible so that he can concentrate his efforts on the Western Front offensive he is planning. Today German and Austro-Hungarian troops launch Operation Faustschlag, an offensive intended to force the Russians to sign the peace treaty. They encounter no meaningful resistance; by now the old Tsarist army has been disbanded and the recently established Red Army is in no position to take the field against the Kaiser‘s juggernaut. The Germans and their allies advance at a speed that would be unimaginable on the Western Front.

The peace negotiations at Brest-Litovsk are finally beginning to pay dividends for the Germans. Yesterday representatives of the Ukrainian Rada agree a separate peace with Germany and its allies, agreeing to supply Germany with large quantities of grain in return for an end to hostilities and recognition of its independence from Russia. However the Soviet delegation of Leon Trotsky continue to play for time, hoping that revolution will spread to central and western Europe before painful concessions have to be agreed.

But now Ludendorff has had enough of Trotsky’s delaying tactics. He instructs the German delegation to present the Russians with a harsh set of peace terms on a take-it-or-leave-it basis. If the Russians do not agree then the German army will resume its advance.

In Petrograd the Soviet government is divided by the German ultimatum. Lenin favours acceptance, on the grounds that if the German terms are not accepted now, worse will have to be accepted in the future. But others favour rejection, hoping that a militia war against the Germans will inspire the Russian people and spread the revolution westwards. Lenin thinks such ideas are hopelessly over-optimistic but is unable to railroad his comrades.

From this internal division emerges a strange compromise. Trotsky informs the Germans that Russia is unilaterally leaving the war, without accepting the German peace terms. If the Germans want to keep the war going they can do so on their own.

Trotsky’s rhetorical flourish stuns the Germans. “Unerhört!“, exclaims Hoffmann, one of the generals present. Unconscionable. But as Trotsky and his delegation depart Brest-Litovsk, the German army on the Eastern Front prepares for action.