The British and French have overrun most of the German colony of Kamerun. The garrison of Mora is the only German force left in the colony. This northern outpost has been under siege since shortly after the war’s start in 1914. Now Major Ernst von Raben, German commander at Mora, accepts the inevitable and agrees surrender terms with the Allies.

Raben and his European officers will be interned in Britain. The terms for his African soldiers are generous. Not merely are they allowed to return to their homes unmolested but, at Raben’s request, the British also pay their back wages.

Kamerun, Togoland, and South West Africa are all now in Allied hands. With Germany’s Pacific colonies also overrun, unconquered German East Africa is all that remains of the Kaiser’s overseas empire.

In Kamerun German resistance is drawing to a close. French and British columns have been advancing towards the southern German base of Yaounde (also known as Jaunde). The Allies have taken months to reach the remote settlement, allowing the Germans time to build extensive fortifications there.

Today a British column finally reaches the town, only to find it deserted. Rather than wait to be bottled up in a siege whose outcome is inevitable, the Germans have fled. They intend making their way to the Spanish colony of Rio Muni to avoid capture by the Allies.

The British are in no state to mount a serious pursuit of the Germans and so leave them to get away. With resistance in the southern part of the colony effectively over, the only German force left in Kamerun is the besieged garrison of Mora. Its end cannot be far off.

In Kamerun the tide of war has turned against the Germans. British and French forces are advancing on their southern base of Yaounde. In the north of the country, German resistance has been eliminated, save at Mora, where German forces are under siege.

The situation in Mora is now rather desperate. The defenders are short of food and medical supplies. But they are still able to obtain some victuals from native villages near the German positions. Whether the Kamerunians supply the garrison with food out of sympathy for their colonial masters or because of friendly relations with the Africans making up the bulk of the German force (or whether the Mora garrison seizes the food by force) is not recorded. Either way the supplying of food to Mora by the natives infuriates the British and French besiegers. Today the British put the village of Wudume to the torch to punish its inhabitants for assisting the Mora defenders.

Mora mountain, where the Germans are entrenched (The Great War Blog)

In Kamerun a British force is attacking a German fort on Banjo Mountain. The first assault failed to dislodge the Germans, but General Cunliffe, the British commander is not giving up. After blasting the Germans with artillery fire he sends his men to attack again. In the middle of a thunderstorm Nigerian troops make it to the mountaintop and engage the enemy in bitter hand to hand fighting.

The struggle goes on through the night, but by the morning the British are victorious. The German commander, Captain Adolf Schipper, is dead, as are many of his men. Many of the others (locally recruited Askaris) have deserted. The survivors surrender.

The victory is a great success for the British. Not merely have they eliminated a key German base, they have also captured a considerable stock of food and other supplies. Now Cunliffe is well-placed to lead his men against Yaounde, the main centre of German resistance in Kamerun. When that falls, the entire colony will be in Allied hands, apart from besieged Mora in the north.

In Kamerun, British and French forces are gradually eliminating German resistance. In the north of the West African colony, the Germans are bottled up in the fortress of Mora, besieged by the Allies. To the south, the Germans are still able to operate freely from their base at Yaounde, but their time is running out. The end of the rainy season has made it easier for British and French columns to move through the country and now they are beginning to make their way towards what is now the capital of German Kamerun. 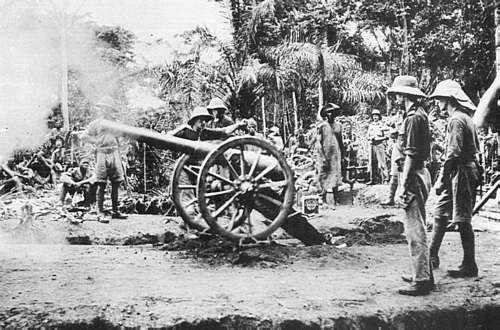 But the British want to eliminate German bases close to the border of Nigeria first. One of these is a fortified hilltop position near the town of Banjo. A British force under General Frederick Cunliffe marches here from the siege lines around Mora. After occupying the town, Cunliffe sends his men to attack the fort. Marching uphill through fog they are able to surprise the defenders. The British also have the advantage of artillery support. However the Germans (a small number of Europeans with a larger number of Askaris) are able to repel the initial assault. Cunliffe is nevertheless determined to renew the attacks in the morning. He does not want Banjo Mountain to become another protracted siege like Mora to the north; the German fort must be taken by storm.

In northern Kamerun French and British forces are besieging the German base of Mora. French troops have skirmished unsuccessfully with the Germans in the outlying village of Kilwe. Now the British decide to have a crack at Mora itself. After an overnight bombardment they launch an assault on Mora’s northern defences. The attack fails, with the British suffering some 16 men killed (one officer from Britain itself and 15 African troops). By the standards of the war in Africa to date, these are heavy casualties. For their part, the Germans suffer five men wounded.

The British are not for giving up. They launch some more attacks once night falls, but in the darkness the assault troops get lost and are unable to find their way to the enemy lines. That at least is what they tell their commanders.

General Frederick Cunliffe commands the Allies at Mora. After the failure of the British attempt to storm the town, he decides to tighten the siege around it and batter the enemy with ever increasing artillery bombardments.

In West Africa, the Allies have still not been able to eliminate German resistance in Kamerun. In the north of the country, German forces are under siege in the town of Mora. The Germans are short of food but are able to feed themselves by raiding Allied positions. Some of the African people in the vicinity of Mora are also supplying the Germans with food, perhaps because the rank and file of the German force is made up of locally recruited men.

French troops besieging Mora have already made an ineffectual attempt to take the village of Kilwe, whose inhabitants are sympathetic to the Germans. Now they have another go. After first bombarding the enemy with light artillery pieces the French infantry attack. But the German defenders of the village are too much for them. The French are driven back, suffering the loss of seven men dead (a sixth of the attacking force).

In the south of the vast colony the Germans have another force based in Yaounde (also known as Jaunde and Yaunde). The Germans here are not under siege, protected from the attention of the Allies by the space separating them from enemy units and the country’s difficult terrain. But now with the end of the rainy season movement through Kamerun is easier. The Allies make preparations to send columns to capture Yaounde and eliminate the Germans’ southern column.

German colonial troops in a village, before the war (Goethe Institut)

The Allies are beginning to get the upper hand of the Germans in the West African colony of Kamerun, but the Germans and their African servants are not giving up yet. In the north of the colony, the Germans are bottled up in fortified positions at Mora. The Allies have been unable to take Mora by storm and are trying to starve out the Germans. However. the Germans are somehow able to survive on very short rations. They supplement their own food stocks by raiding the Allied lines and stealing theirs.

The Germans in Mora are also able to obtain some supplies from African civilians in the surrounding area. The Kamerun natives’ support for the Germans in Mora angers the Allies. In an attempt to put a stop to this kind of nonsense, a French force attacks the village of Kilwe, where the locals have been assisting the Mora garrison. Unfortunately for the French, a German detachment from Mora counter-attacks, successfully chasing them away from the village.

In this terrible defeat the French suffer the loss of one soldier.

British forces are stalemated in the trenches of Gallipoli and the Western Front, but in Africa they still have freedom of movement. In Germany’s West African colony of Kamerun, the British follow up on their victory at Garua by advancing south towards the town of Ngaundere. The weather turns nasty and the British find themselves marching through a severe storm. However, this turns to their advantage: the Germans and their Askari troops are not expecting anyone to try attacking them in this heavy weather. The British catch their enemies by surprise, quickly overrunning Ngaundere’s outposts and then driving the Germans from the town itself. British casualties are minimal.

The British do not realise the extent of the victory. The Germans in Kamerun had planned to use Ngaundere and the productive agricultural land around it as the base for their mobile columns. Now that base has been denied to them. The fall of the town further separates German forces in the south of the colony from those besieged in Mora in the north. However the onset of the rainy season makes it more or less impossible for the British to continue their advance.

In Mora itself the situation remains grim. The rains at least mean that the defenders are no longer short of water, but they are very low in food, so much so that they have to supplement their rations by raiding the British besiegers to steal theirs. On hearing how badly things are going for his compatriots further south, Major Ernst von Raben gives his African troops the freedom to leave Mora and return to their homes. They all opt to stay and see out the siege.

In Kamerun the siege of Garua comes to an end. British and French forces had been besieging the German outpost. The French have brought heavy artillery with them and have been battering the German positions. Many of the defenders have been killed while others (particularly the locally recruited colonial troops) have deserted or are refusing to man the defences. Accepting the inevitable, Captain Kurt von Crailsheim surrenders Garua to the Allies. A couple of hundred troops are taken into captivity, mostly colonials but also a few dozen from Germany itself.

The fall of Garua is quite a coup. Not merely have the Allies taken the position and eliminated a German mobile force, they have also captured all the ammunition and supplies the Germans had stockpiled in the town. They are now in a good position to further advance the conquest of Kamerun.