Portugal joined the Allies in 1916 but the country played a relatively minor part in the war against Germany. In Africa Portuguese troops assisted in the containment Lettow-Vorbeck while a small contingent of Portuguese troops went to the Western Front, where they were mangled by the second of Ludendorff‘s offensives earlier this year.

At home Portuguese politics has become increasingly unruly. Sidónio Pais has promoted himself from prime minister to president and has been ruling in an increasingly authoritarian manner. However he faces many opponents and the country is now wracked with unrest.

Pais survived an assassination attempt earlier this month but today he is not so lucky. When he arrives in a Lisbon train station, on his way to the north of the country, leftist agitator José Júlio da Costa is waiting. After penetrating the security cordon, Da Costa produces a hidden pistol and fires two bullets into the President. Pandemonium breaks out, with wild shooting by the presidential bodyguard killing four bystanders. Da Costa is arrested, to face torture and imprisonment, while Pais dies on his way to hospital.

The incident may have no significance beyond Portugal’s borders as it indicates merely the disordered state of that country. But it could also be a warning to Europe’s leaders that with the end of the war against Germany they now face a new threat from violent revolutionaries. 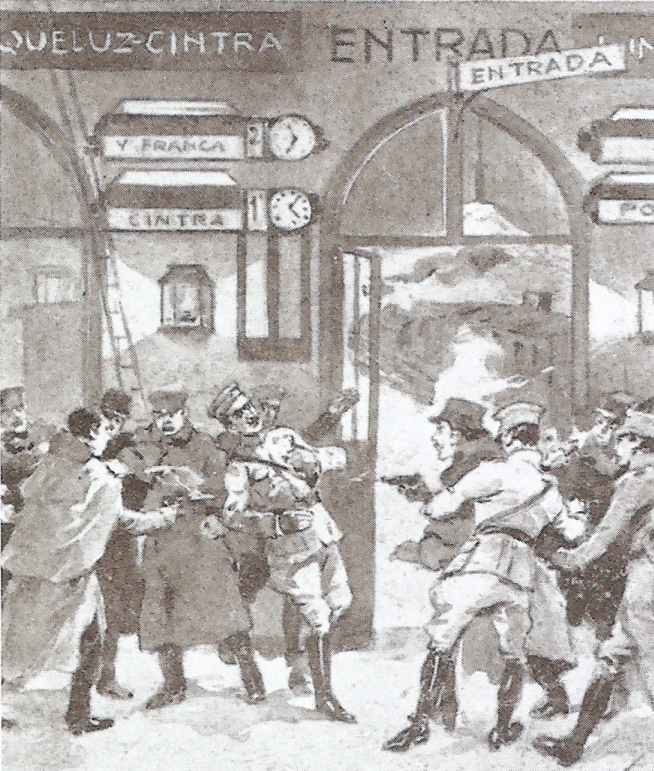 President Sidónio Pais and a postcard of his assassination (Wikipedia)

Ireland is also voting today, as part of the British general election. Politics is different on this island, however, with the issue of the country’s future relationship to Britain exercising voters greatly. The previously dominant Irish Parliamentary Party is now under threat from the insurgent Sinn Féin, whose advanced nationalism strikes a chord with many. The Irish Parliamentary Party’s candidates hope that if elected to Westminster they will be able to press Ireland’s interests there. Sinn Féin however has declared that if elected its candidates will not take their seats in the House of Commons but instead will meet in Dublin as an Irish parliament, thereby paving the way for Irish independence. Many of Sinn Féin’s leaders are still in jail after being arrested earlier this year over an alleged plot to assist a German invasion, so if elected they will not be able to take seats in either London or Dublin. Nevertheless the party hopes that it will see enough candidates elected to be able to assemble an Irish national parliament.

Unionists are also contesting the election, but mostly in the north east of Ireland where they are strongest. They favour Ireland’s continued membership of the United Kingdom and their mainly Protestant supporters fear the consequences of self government in a predominantly Catholic Ireland. The Irish Labour Party meanwhile has opted not to field candidates, in order to allow voters a straight choice between the IPP and Sinn Féin. A number of Unionist Labour candidates are standing for election in the north east; this group is essentially an offshoot of the Unionists, designed to keep Protestant workers on the Unionist straight and narrow and to prevent their succumbing to the temptations of socialism or Bolshevism.

Like their British counterparts, Irish women are now able to vote (if over 30 years of age and meeting certain property requirements) and run for election. Sinn Féin is the only party putting forward women candidates, Winifred Carney in Belfast and Constance Markievicz in Dublin. Markievicz is currently in prison in England.

As with the rest of the United Kingdom, although Ireland is voting today it will not be until the 28th of December that the results are known. This is because of the large numbers of voters who are still serving abroad with the British armed forces.

Today the people of Britain go to the polls. The electorate has been greatly expanded since the last election in 1911: all men aged 21 and over are now able to vote, as are women over 30 if they meet minimal property requirements. No one is quite sure how this extension of the franchise will affect the composition of the House of Commons but all parties are competing for the attentions of the new voters. Prime Minister David Lloyd George hopes that the coalition government of Conservatives and his faction of the Liberals will be returned to office, while Labour and Asquith‘s Liberals are trying to overturn the government’s majority.

As well as voting for the first time, women are now also able to run for office, following a change to the law in November. However, only a small number of women have put themselves forward for election, including former suffragette Christabel Pankhurst, standing for the Women’s Party. Other candidates are running as independents or for Labour or the Liberals. In Ireland Sinn Féin has put forward two women candidates, Winifred Carney and Constance Markievicz.

Although Britain votes today, it will be some time before the results are known. Because so many voters are still serving overseas in the armed forces, the results will not be counted until the 28th of December. Cartoon from The Railway Review, newspaper of the National Union of Railwaymen (University of Warwick Library – ‘The parliamentary battlefield’: Government, Labour and the khaki election)

The war has ended in the Levant but large number of Allied troops remain in Syria and Palestine. Some of these will be here for some time yet as enforcers of the British or French suzerainty that is succeeding Turkish rule. Most of the Allied troops are however slated for demobilisation, but a shortage of shipping means that the soldiers cannot be transported home just yet.

Relations between the Allied troops and the local Arab population are not always warm. Incidents of thieving and pilfering by rowdy soldiers and light-fingered locals combine with racist assumptions to exacerbate tensions. A particularly unsavoury incident occurs today at the Palestinian village of Sarafand, south of Jaffa. Believing that one of their comrades had been murdered by Palestinian from the village, New Zealand troops first formed a cordon around Sarafand and then stormed the village. After driving out women, children and elderly men, the New Zealanders then set upon the remaining menfolk of the village with cudgels and bayonets. Several dozen Palestinians are killed, possibly more than a hundred.

Allenby, the British commander, is furious when he learns of the massacre. However, the New Zealanders and other nearby units refuse to co-operate with inquiries into the matter, making it impossible to identify the individuals responsible. The ANZAC murderers remain unpunished. 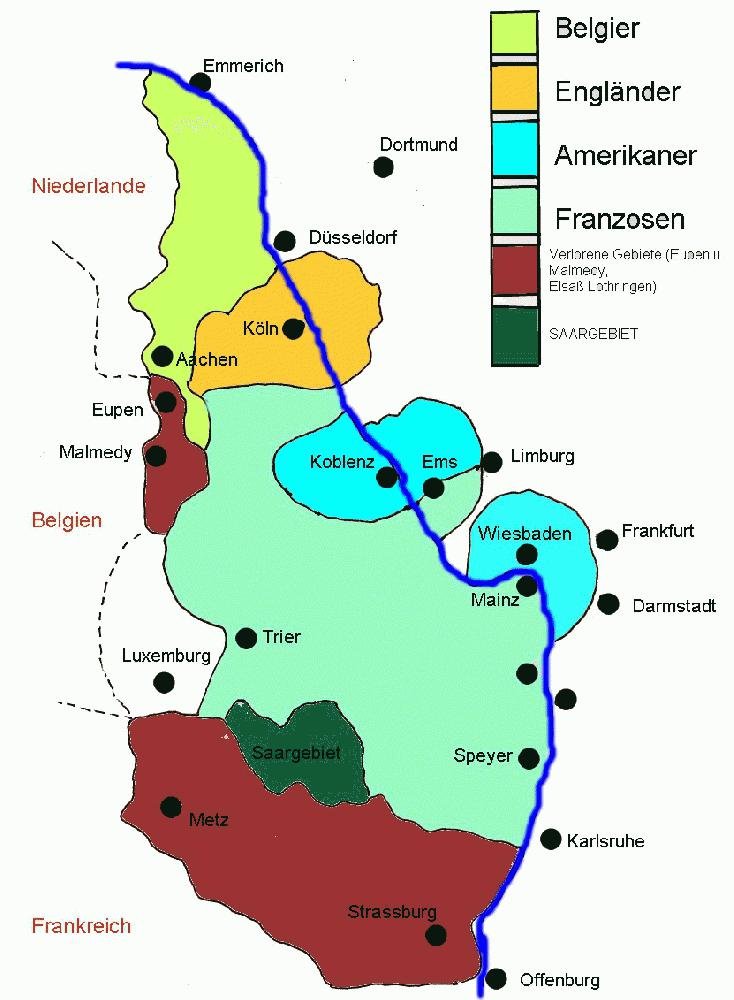 As per the terms of the armistice, German forces have now withdrawn from all the French and Belgian territory they occupied at the start of the war; Luxembourg‘s independence has also been restored. Now Allied forces are moving into western Germany, occupying the Rhineland and preparing to establish bridgeheads across the river.

In Berlin meanwhile German troops evacuated from the Western Front today march through the city. The event almost has the characteristics of a victory parade, with Chancellor Ebert greeting the returning soldiers with the words “No enemy has vanquished you! You return undefeated from the field of battle.”

Any German soldier who has fought this year on the Western Front knows that the German army has been defeated by the Allies, who first contained Ludendorff‘s spring offensives and then broke the Germans’ ability to resist in the hundred days of offensives that preceded the armistice. Ebert knows this too, but he has his reasons for indulging the army’s pride. He fears that the fragile new republic is under threat from leftist extremists like Karl Liebknecht and Rosa Luxemburg and from reactionary elements who want to establish a conservative dictatorship. If flattery is the price of the army’s support for his government, then so be it.

Ebert waves his hat (deutschland.de, how Germany ticks – Germany’s greatest revolution: Why the German November Revolution has often been underestimated) 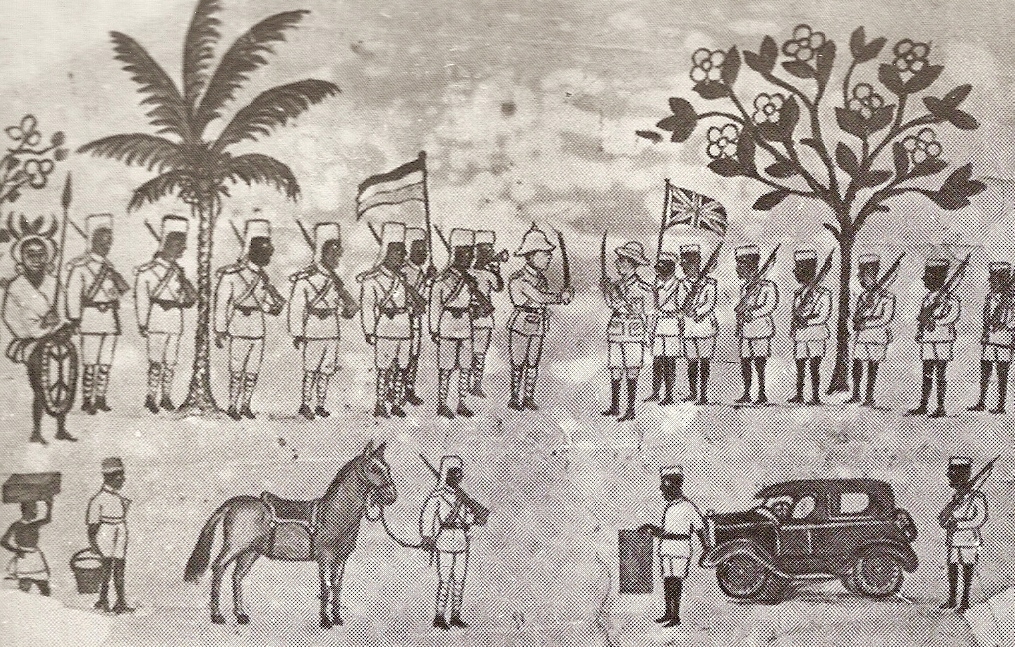 The Western Front armistice also obliged Lettow-Vorbeck‘s army in east Africa to lay down its arms. Lettow-Vorbeck had been unable to prevent much larger Allied forces from overrunning German East Africa but the Allies in turn have been unable to eliminate Lettow-Vorbeck’s force (which consists of mostly African troops (known as Askaris) led by European officers). Lettow-Vorbeck’s men have retreated into the interior of the colony, striking back against the Allies where they can but always retreating away from enemy forces strong enough to destroy them. Lettow-Vorbeck has also carried the war into enemy territory, launching raids into Portuguese Mozambique and more recently the British colony of Northern Rhodesia.

It is easy to romanticise Lettow-Vorbeck’s army as a plucky David taking on the Allied Goliath, but the reality is a bit less appealing. The Germans are supporting themselves by looting food from the local civilian population, so his army leaves famine and devastation in its wake. Ludwig Deppe, a doctor serving with Lettow-Vorbeck, ruefully notes: “We are no longer the agents of culture; our track is marked by death, plundering and evacuated villages, just like the progress of our own and enemy armies in the Thirty Years War”; hundreds of thousands of civilians may have died from famine and disease. The Allies meanwhile have press-ganged enormous numbers of African porters to support their armies, under-feeding them and bringing them to areas where they have no resistance to the local diseases, with the result that the porters have been dying at a higher rate than soldiers on the Western Front; at 45,000 men (soldiers and porters) killed, losses from British East Africa amount to some 12% of the adult male population.

While the armistice obliged Lettow-Vorbeck to surrender, there was the problem of how to let him know the war was over. Lettow-Vorbeck is completely cut off from Germany and has no radio with which to communicate with Berlin. However Lettow-Vorbeck learns of the armistice when an Allied dispatch is captured. Initially the Germans think that the war in Europe must have ended with German victory but gradually the harsh reality of defeat dawns on them. Finally today at Abercorn in Northern Rhodesia, Lettow-Vorbeck and his men surrender to the British. His army is now tiny, just 155 Germans, 1,168 Askaris and several thousand more porters. The German officers are allowed keep their swords and pistols pending transportation back to Europe. 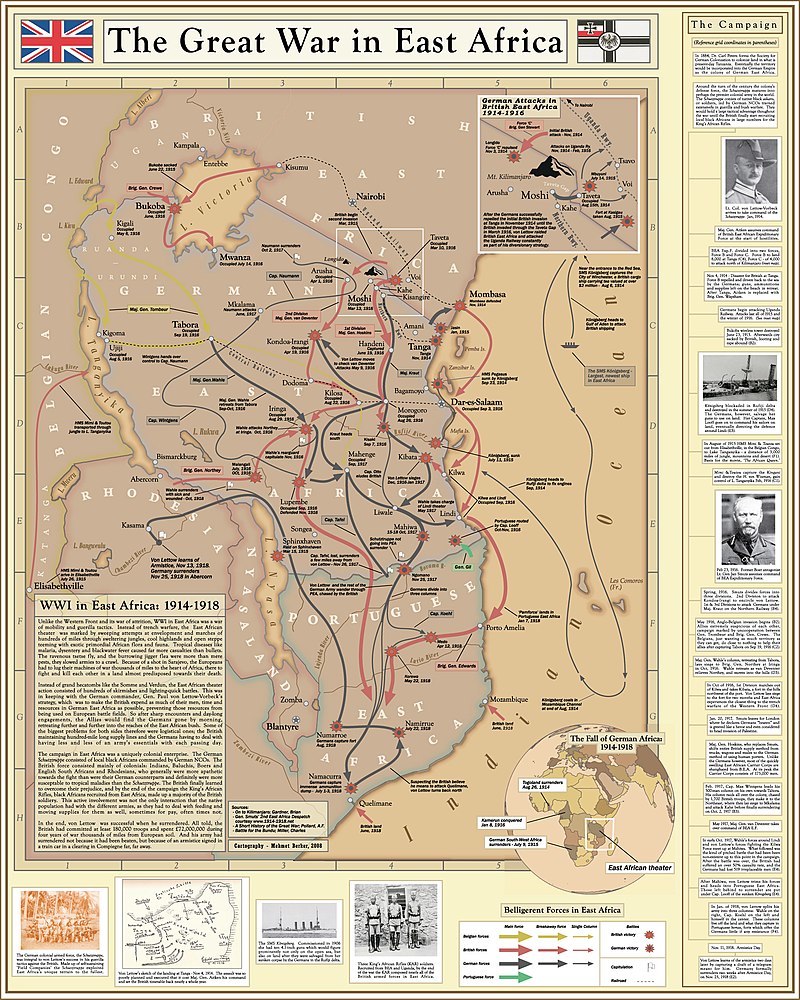 Since the Western Front armistice came into effect the Germans have been retreating and the Allies advancing to recover the lost territory. This leads to emotional scenes as places that have been under German occupation since the war’s start are now liberated. King Albert of Belgium returned to Brussels a few days ago, seeing his capital for the first time since 1914, and is greeted by cheering crowds. French troops today arrive in Strasbourg, capital of Alsace, which, like nearby Lorraine, was lost to France after the war of 1870. The return of the Tricolour to the streets of Strasbourg gives rise to more emotional scenes, but patriotic joy here may not be entirely universal, as one of the first acts of the French soldiers is to suppress a revolutionary council that had established itself in the town.

The King and Queen of Belgium in Brussels (The Cross of Laeken: The King Returns to Brussels, 1918)

The French army returns to Strasbourg (The Blue Line – the Vosges Frontier from 1871 to 1914: The Kaiser’s Birthday, place Kléber, Strasbourg)