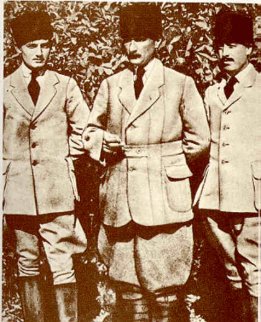 In May the Turkish government sent Kemal, hero of the Gallipoli campaign, to oversee the demobilisation of Turkish troops, as required by Turkey’s armistice with the Allies. However Kemal has instead began to form a network of nationalist army officers who are determined to resist the partition of their country. Turkish nationalists are now resigned to the loss of the Ottoman Empire’s Arab lands, but they fear that the recent Greek and Italian landings in western Anatolia signal that the Allies are intent on dividing up the Turkish heartland, something that they find unconscionable.

As the British become aware of Kemal’s activities, they press the Turkish authorities in Constantinople to rein him in. Eventually the Sultan’s government gives in. Today Kemal receives an order to cease his activities and return to Constantinople. But Kemal does not obey. Instead he resigns from the Ottoman army and summons a congress of like-minded nationalists to assemble at Erzurum. In his determination to preserve the Turkish nation, Kemal is now in revolt against the Ottoman Empire.