Germany’s U-boat campaign was meant to force Britain out of the war. It has failed. The Germans underestimated the resilience of the British to shipping losses but they also failed to anticipate Allied countermeasures against the U-boats. Allied ships are now increasingly sailing in convoys, guarded from the U-boats by warships. The U-boats have great difficulties pressing attacks against ships in convoys, with the result that Allied shipping losses have declined. In October the U-boats managed to sink around 460,000 tonnes of Allied shipping, still an impressive figure but well below the over-optimistic target of 600,000 tonnes projected as being needed each month to force Britain to make peace.

The escalated U-boat campaign, and Allied countermeasures against it, is also taking its toll on the U-boat crews. Not merely are they being worked to exhaustion, they have also seen their own losses spiral upwards from those of the previous year. The submariners are giving their all, but for naught.

After he took over in the Levant, Britain’s Allenby was ordered to secure Jerusalem by the end of the year. This is no easy task. Previous British efforts to invade Palestine have been blocked by tenacious Turkish resistance at Gaza. Turkish defences there are strong and although the British outnumber the enemy Allenby suspects that another frontal assault will fail. He opts for an indirect approach,

targeting Beersheba, which is further inland and less strongly defended by the Turks. Allenby hopes to take Beersheba and then turn the Turkish line.

To deceive the Turks, the British have spent the last few days subjecting Gaza to an intense bombardment. In the meantime they have moved men up to face Beersheba in secret. Now they blast the Turkish defenders with a devastating bombardment, after which the infantry move forward. But although battered, the Turks fail to collapse, containing the British advance.

If Beersheba does not fall by sunset then Allenby will have to abandon the battle. He needs the town’s wells and without them his men will not have enough water to fight on. The infantry are blocked but fortunately for him he has sent an Australian cavalry force on a flanking march to attack the Turks from the north east. With only an hour to go before sunset they launch a desperate cavalry charge, the largest of the war thus far. The Australians rip through the Turkish lines and push on into the town. As night falls the Turks begin to withdraw, leaving Beersheba and its wells in British hands.

Map of marches and attacks (Wikipedia: Battle of Beersheba)

Just as the Germans and Austro-Hungarians launched their offensive at Caporetto the Italian government of Paolo Boselli fell. Now after a short interregnum Vittorio Orlando takes over as prime minister. Orlando is a liberal who has been serving as minister of the interior. He is determined to keep Italy in the war, notwithstanding the currently unfolding military disaster. Unlike his predecessors, however,

he is not in awe of Cadorna, the army’s supreme commander. The army’s failures in the face of the enemy offensive has already put Cadorna’s star into the descendant. Faced with a hostile prime minister, it may not be long before the generalissimo is put out to pasture.

The German-led offensive at Caporetto has left the Italians reeling. Italian troops are retreating to the Tagliamento river, some in good order but many in a state of rout. German and Austro-Hungarian troops press on, hoping to exploit their success. Today they advance beyond the pre-war frontier, recovering all of the ground lost to the Italians, including Gorizia, which fell to the Italians last year in the Sixth Battle of the Isonzo.

But help may be on its way for the Italians, as the British and French agree to send six divisions to Italy. Given the parlous state of the country and its army, these reinforcements will not be enough to stop the enemy onslaught, but they do at least signal that Italy is not being abandoned.

Just over a month ago Arthur Rhys-Davids took part in the unequal struggle that saw German ace Werner Voss shot down after battling seven British fighter pilots. Since then Rhys-Davids has been sketched by William Orpen, who plans to paint a portrait of the flier.

Today Rhys-Davids is promoted to lieutenant. He heads off on a routine mission over enemy lines but he does not return. He appears to have fallen victim to German fighter pilot Karl Gallwitz. His body is not recovered.

With the German and Austro-Hungarian assault on the upper Isonzo appearing now to be unstoppable, Italy’s Cadorna bows to the inevitable. He orders the abandonment of the Isonzo line and a withdrawal of the Italian army to the Tagliamento river. In the afternoon he and his staff vacate his headquarters at Udine.

Blaming the men stationed on the upper Isonzo for the rout, Cadorna prioritises the retreat of the men further to the south who have not yet had to face the enemy attacks. They retreat in good in good order, destroying anything that could be of use to the enemy as they go. To the north things are considerably more chaotic. 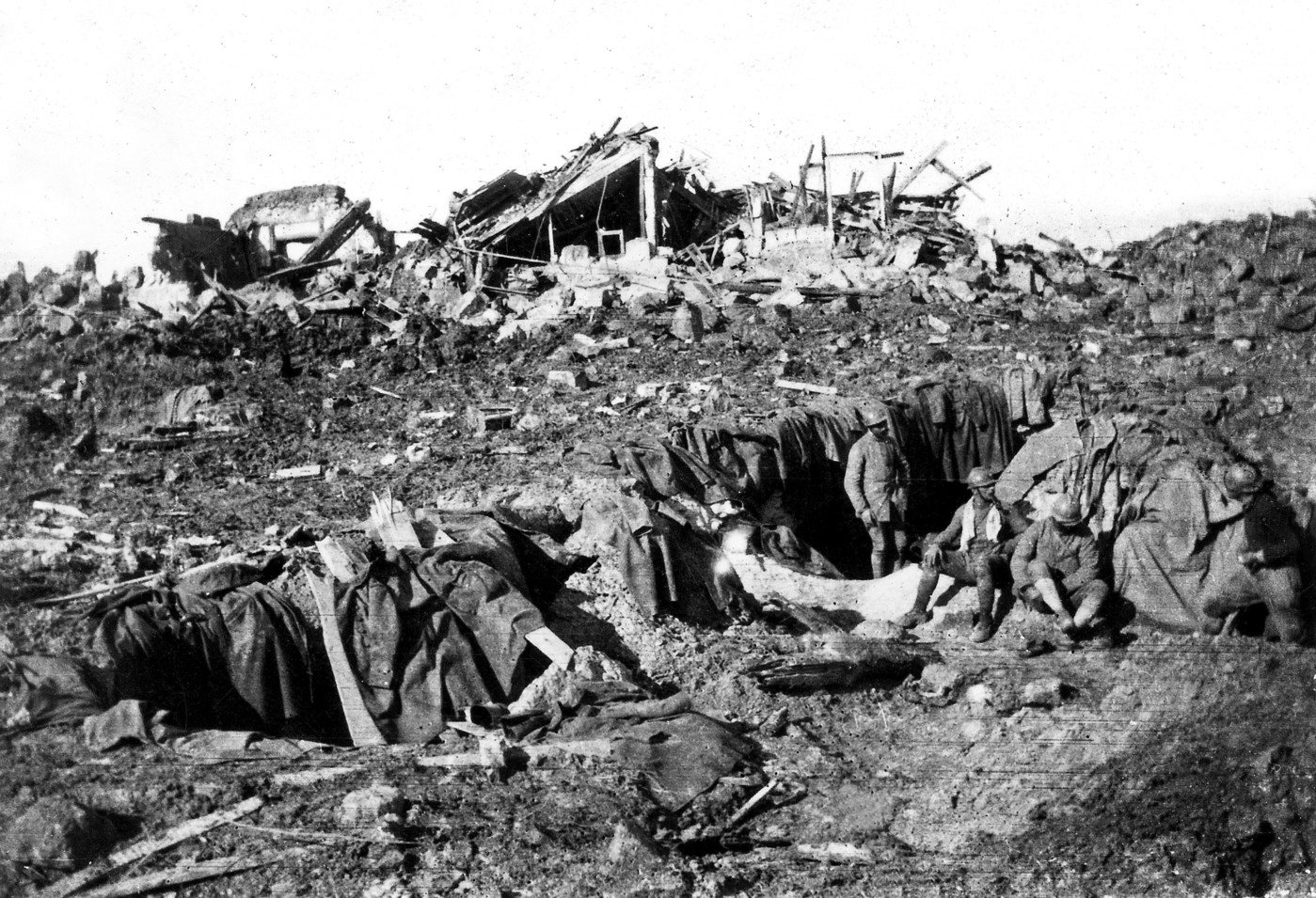 The main Allied effort on the Western Front is taking place at Ypres, where British-led forces are battling the Germans and mud. The French are playing a supporting role in that battle, but they are also carrying out their own offensives elsewhere. In the Chemin des Dames sector over the last few days they have been carrying out a local offensive with limited objectives. Advancing behind a creeping barrage, French troops managed to seize the German-held village of La Malmaison, despite the failure of many of their tanks in the soft ground. German counter-attacks have failed to dislodge the French, who have been able to advance further in the following days. French casualties were not light but appear to have been greatly exceeded by those of the enemy.

For the French commanders this limited success is a further indication that the dark days of the mutinies are now behind the French army. For the Germans meanwhile the battle is disconcerting. They begin to plan a withdrawal to more readily defended positions. Ludendorff also decides that the aggressive French posture means that it would be foolhardy for him to send more men to exploit the recent successes at Caporetto on the Italian front.

Austro-Hungarian and German forces continue to press forward on the upper Isonzo. Much of the Italian forces here have collapsed, with men either abandoning their positions and fleeing to the rear or surrendering at first sight of the enemy. Using infiltration tactics, the Germans and Austro-Hungarians are pressing forwards as quickly as possible, leaving pockets of enemy resistance to be picked off later.

The king of the infiltrators is Germany’s Rommel, whose battalion has advanced some 18 kilometres since the battle’s start, seizing the supposedly impregnable position on Mount Matajur. Rommel has captured some 9,000 enemy prisoners, including 150 officers, with two entire brigades surrendering to him without a fight. The second brigade he captures more or less on his own; these Italians are so keen to surrender that they hoist him on their shoulders and shout “Evviva Germania!”. Rommel’s own losses since the battle started are just 6 dead and 30 wounded.

Austria-Hungary’s Conrad, formerly commander in chief but now the local commander in the Trentino to the west, is chomping at the bit, eager to join the offensive and crush the hated Italians. If he is reinforced he would be able to attack and take the Italians in the rear, perhaps achieving a victory of annihilation that will remove Italy from the war. But Austro-Hungary has no men to spare for him and the Germans are wary of supplying more soldiers; with the British and French applying pressure on the Western Front, Ludendorff does not want to further deplete his reserves there.

Neverthless, the Italian situation is desperate. Cadorna begins to prepare for a retreat to the Tagliamento and perhaps to rivers further to the rear.

At Ypres, a recent British and ANZAC attempt to advance on Passchendaele has failed. Now the Allies attack again. The British and the antipodeans have been so battered by previous efforts that now it falls to the Canadians to take the leading role. But the Canadians are no more able to advance on Passchendaele than their predecessors. Even without the guns of the Germans, it has become extremely difficult to move across the water-sodden battlefield and the attacks make minimal progress.

An attack by Belgian and French forces to the north of the Ypres salient is somewhat more successful. The Germans are pushed back and several of their pillbox defensive positions captured. The Belgians and French prepare to push on tomorrow. The Canadians and British meanwhile lick their wounds and plan to renew their advance on Passchendaele in the near future.

Mud (Copwick: images of Poelcapelle and the Passchendaele battle site) 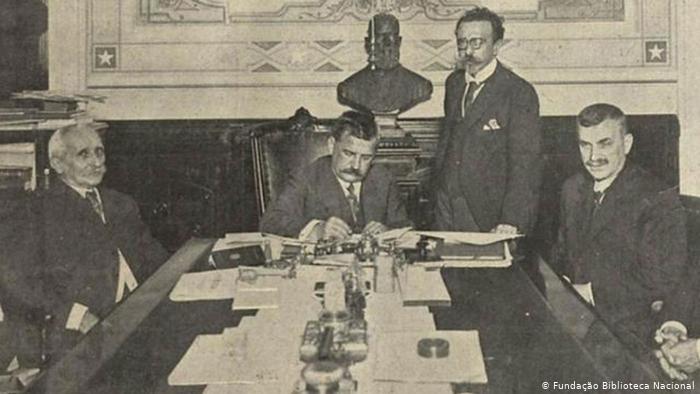 Germany’s escalated U-boat campaign was intended to force Britain out of the war but the actual effect has been to lengthen the list of Germany’s enemies. The United States declared war in April and now Germany acquires a new South American enemy. German attacks on Brazilian ships have poisoned relations between the two countries. After the sinking by a U-boat of a Brazilian freighter off Spain three days ago, Brazil finally declares war on Germany.

The decision to join the war is not universally popular in Brazil. Trade unionists and socialists in particular are opposed to the end of neutrality. There have recently been violent disturbances in Brazil, as leftists have sought to block the government’s slide towards war. With the country now at war, the Brazilian government declares a state of emergency and prepares a crackdown on unruly elements.

President Venceslau Brás of Brazil signs the declaration of war (Wikipedia: Brazil during World War I)