Enver Pasha, the most prominent of the triumvirate that leads Turkey, has formed a new army group known in Turkish as Yildirim (Lightning Force). With a German senior staff, headed by none other than Falkenhayn, the group has been assembling in Aleppo in preparation for an offensive in Mesopotamia to recapture Baghdad and turn the tables on the British there.

Djemal Pasha, Turkey’s proconsul in Syria, is concerned about the threat of a British advance into Palestine. Enver has no time for naysayers and relieves him of his command, but Djemal’s concerns are heeded by Falkenhayn. He becomes convinced that an offensive in Mesopotamia would be foolhardy when his rear in Palestine is threatened. The British have also just pushed on successfully from Baghdad to Ramadi (after their previous failure), making a Turkish Mesopotamian offensive there that bit more difficult.

Enver would not listen to his Turkish colleague but he heeds the German. With his grudging acquiescence Yildirim now begins to redeploy to southern Palestine to meet the British threat there.

British Commonwealth forces have overrun the coastal areas of German East Africa. South Africa’s Deventer has been left to command the forces mopping up German resistance. The British authorities in London are keen to bring an end to the East African campaign as soon as possible, so that the men and ships deployed there can be moved elsewhere.

German forces under Lettow-Vorbeck are greatly outnumbered and completely cut off from Europe. They are feeding themselves by living off the land and relying on what they can capture from the enemy for military and medical supplies. The German army here is mostly comprised of Askaris, locally recruited troops, with a small number of European officers who are at perpetual risk of succumbing to malaria should quinine supplies run out.

Nevertheless, Lettow-Vorbeck is determined to fight on. His men are now concentrated in the south of the country and he is contesting Allied advances from the coast. In difficult terrain the Allies have struggled against the Germans, but today they manage to take his main base at Nahungu. However Lettow-Vorbeck and enough of his men escape that they will be able to continue resistance. For the Germans, survival is victory.

The British are staging a rolling series of limited attacks at Ypres. These are meant to attritional, inflicting more damage on the Germans than the Allies are taking, but casualties are heavy on both sides. Since the recent assault on the Menin Road and the fighting that followed, some 20,000 losses have been suffered by British and Australian forces. German losses are about the same. 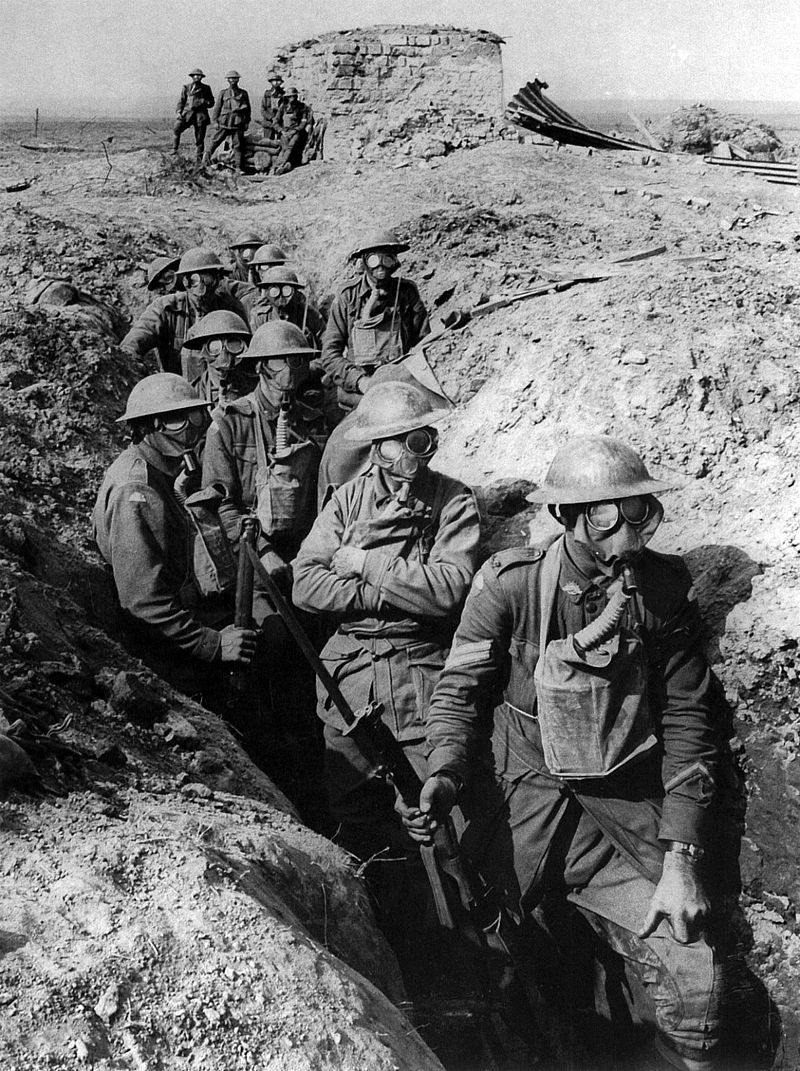 Now the British shift focus to attack Polygon Wood (so named for its curious shape on the map). Again the British are helped by relatively dry weather conditions and good preparations. British and Australian troops push into the wood (or what is left of it) and establish themselves on more easily defended positions from which German rear areas can be observed. The Germans launch vigorous counter-attacks but are unable to dislodge the British from their gains. Casualties on both sides are heavy: well above 10,000 men each.

Against doctor’s orders, Manfred von Richthofen, the Red Baron, came back to active service in late July after being wounded earlier that month. Since then he has managed to shoot down several enemy aeroplanes but is still suffering the after effects of his head injury. He is currently once more on sick leave but hopes to be back in action soon.

Richthofen is not Germany’s only star pilot. Another flier who has made a name for himself is Werner Voss, a subordinate commander of the Red Baron’s Flying Circus. Voss is now flying the new Fokker Triplane, a highly manoeuvrable and fast climbing aircraft. He has shot down some 47 enemy aircraft since his first kill in November 1916.

Voss’s squadron has been deployed to Flanders, where it is contesting Allied control of the skies above Ypres. Voss returned from leave yesterday and this morning he returns to the skies and shoots down a British bomber. On returning to his base he celebrates by looping the loop. Nevertheless his colleagues note that he appears unusually tense, with one reporting “He had the nervous instability of a cat”.

In the evening Voss and his comrades set off again. This time they find themselves caught in a battle royale with a large number of enemy aircraft. In the confused dogfight that develops, Voss finds himself being targeted by six British aircraft, all flown by ace fighter pilots. Accounts vary but he appears not to try to evade his pursuers, instead taking every opportunity to turn the tables on his opponents. He scores hits on most of the British aeroplanes but does not bring any down.

The uneven battle can have only one end. British bullets strike Voss and his aeroplane smashes into the ground on the British side of the line. That evening the British pilots drink a toast to the brave flier they have killed. Voss was 20 years of age.

The Seeadler, a German raiding ship, has preyed on Allied shipping in the Atlantic and Pacific before being accidentally wrecked on the island of Mopelia in the Society Islands. Felix von Luckner, the Seeadler‘s captain is however determined to continue his war. He leaves Mopelia with five of his men in an open boat, hoping to capture a ship that he can use to continue his raiding.

Pretending to be Norwegians crossing the Pacific for a bet, Luckner is able to obtain supplies from the New Zealand authorities on the island of Atiu. He travels on to the Fijian island of Wakaya (a journey of some 3,700 kilometres in an open boat) but here his luck runs out as the local police see through his Norwegian-sailor ruse. Luckner and his men are arrested and sent off to New Zealand as prisoners-of-war. 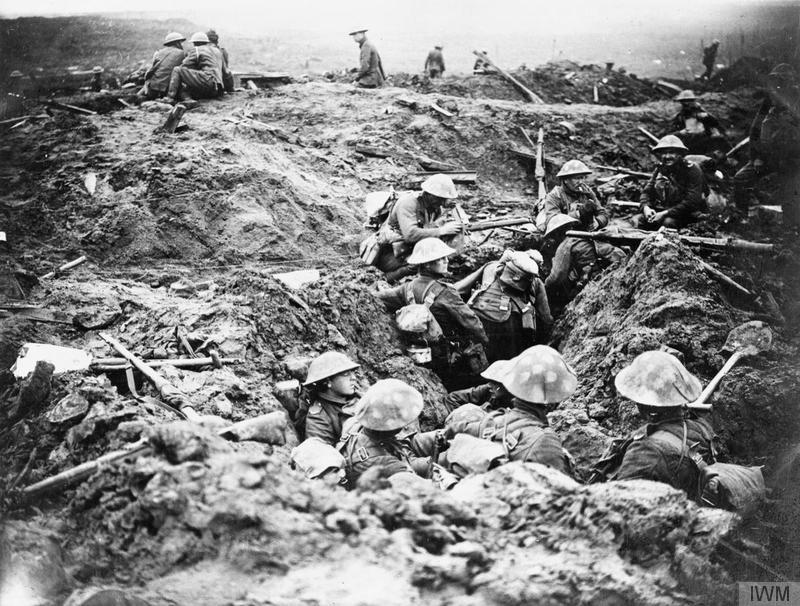 Fighting at Ypres continues in fits and starts. The weather has improved somewhat, making it easier for the British. Plumer, the new local commander, is staging a series of limited offensives, though Haig continues to dream of a breakthrough. Today the British attack on a wide front straddling the Menin Road from Ypres. Artillery blasts German front line positions, with the guns then being retargetted to hit enemy forces staging counterattacks.

Plumer’s men make modest gains, advancing on average less than a kilometre. But this is deliberate, with the attack intended to seize and hold territory and then force the Germans to fight at a disadvantage. Now after the initial gains both sides attempt to reorganise their defences and take the best possible positions. 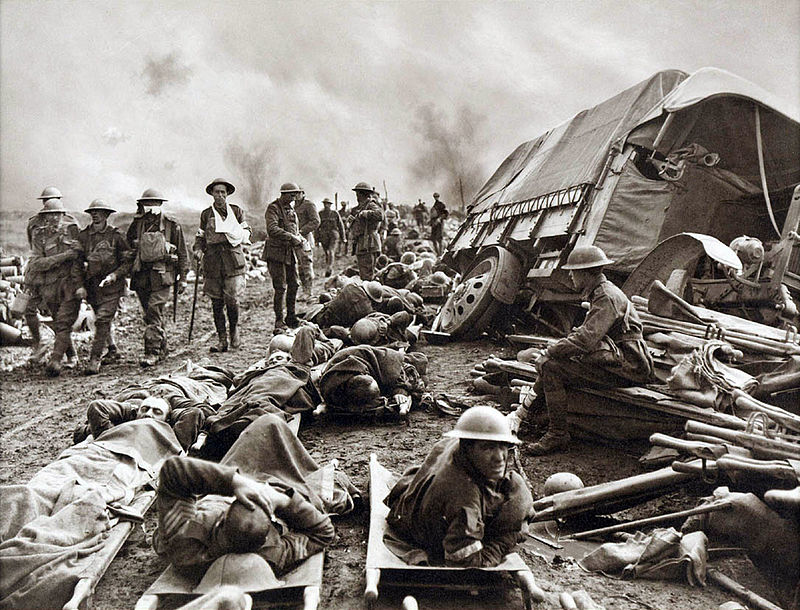 After initial gains the eleventh Italian assault on the Isonzo has turned into another slogging match. The Austro-Hungarian decision to retreat to the eastern edge of the Bainsizza plateau has paid off: the Italian advance has been contained. After a series of massed attacks fail to break through Italy’s Cadorna orders his men to halt and assume a defensive posture. The battle is now over.

Italian losses have been great: they have taken some 166,000 casualties, with 25,000 losses in a series of fruitless attempts to take the mountain of San Gabriele. Two thirds of the units involved in the battle are now at half strength or less. Cadorna trumpets the battle as a victory on the basis of the early gains achieved, but a few more victories like this will break the Italian army.

The situation on the other side of the hill is not so good either. At 140,000, Austro-Hungarian casualties are also very high. Their army on the Isonzo is smaller than the Italians so the proportionate losses are greater.

Boroevic, the Austro-Hungarian commander, Boroevic fears that the next Italian offensive will cause the collapse of his line. However Emperor Karl has promised him that the next battle will be a counter-offensive against the Italians. Now he prepares to approach the Germans, to ask them to supply more troops for the Eastern Front that will allow him to send more Austro-Hungarians from there to the Isonzo.

The Eleventh Battle of the Isonzo is beginning to wind down, with the Italians having made some gains but at a terrible cost in lost men. Other sectors of the front are relatively quiet but tonight in the Trentino sector the Italians launch a surprise attack on the town of Carzano. Italian troops here have made contact with the troops opposite, who include Serbs and Czechs hostile to the Austro-Hungarian Empire. The rebels have arranged to let Italian troops advance through their positions to Carzano, to be followed by the main body of Italian troops who will exploit this hole in the enemy lines.

Unfortunately the more senior Italian commanders in the sector are half-hearted in their support for the attack, suspicious that some kind of trap is being laid for them. The first wave of Italian troops move through the enemy lines to Carzano but the followup troops advance far too slowly. Eventually the Austro-Hungarians realise that something is up. The Italian commander orders a withdrawal, abandoning the troops who have made it to Carzano itself. Italian artillery shells them as they surrender. 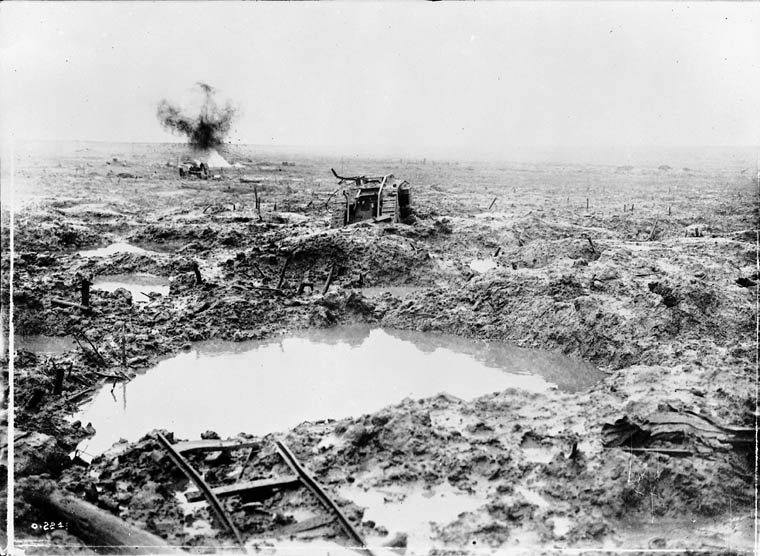 Muddy horror at Ypres. Crisis for Austria-Hungary on the Isonzo. Kornilovmania in Russia. France attacks at Verdun. A bad month for U-boats.

3/8/1917 The Green Corn Rebellion: Oklahoma rises up against the war

25/8/1917 Ypres: the siege of Fray Bentos reaches its conclusion