But today the Armenians of Van receive bad news. Turkish successes in the Battle of Manzikert mean that Russian forces are retreating eastwards. Van can no longer be defended from the Turks. The Armenians are advised to gather what they can and join the retreating Russians. Knowing what treatment they would receive from the returning Turks, the Armenians of Van leave their city, joining the ranks of refugees fleeing for their lives.

The Retreat from Van (Martin Ries)

Fighting continues on the Western Front, though combat is localised and more about trying to gain tactical advantages than striving for a strategic victory. Earlier in the month the British attacked the Germans at Hooge, near Ypres. After digging a tunnel under the enemy’s trenches the British successfully exploded a mine, blasting a gap in the German line. But today the Germans strike back at the British.

Ypres has already been the scene of German innovations in the art of war, with the first successful use of poison gas there against the French in April. Now the Germans test another new weapon, the flammenwerfer. This squirts a jet of inflammable liquid, ignited with a taper to become a torrent of flame. 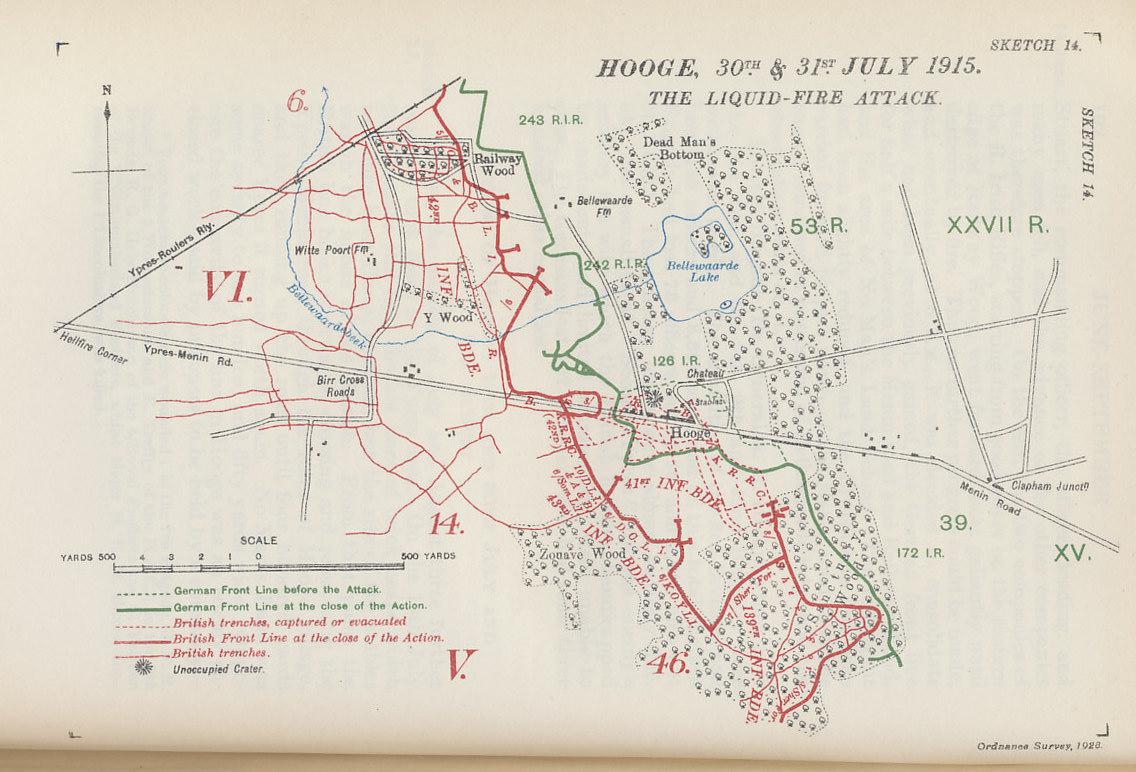 Although the German flame thrower has proved devastating today, it has limitations that prevent it being a truly decisive weapon. The flammenwerfer is a bulky device, not readily transportable outside the German trenches. It can only project flame for a short period, as it uses up its supply of fuel in a couple of minutes. And its range is short, just 18 metres, so it can only be used in those rare situations where German trenches lie close to those of the enemy. It is a good weapon for horrifically killing and terrifying enemy soldiers, but it will not win the war for Germany.

The Second Battle of the Isonzo continues. Italy’s General Cadorna is throwing his men at the Austro-Hungarians. There is no longer any real prospect of a breakthrough. Instead the battle has become a series of attritional struggles over key strong points.

The fighting is bloody for both sides. The Italians are cut to ribbons by the enemy’s machine guns and artillery as they attempt to advance up the mountainsides while Italian artillery exacts a heavy toll on the Austro-Hungarians, particularly to the rear of the frontline. Austria-Hungary’s Boroevic has ordered his men to immediately recapture any position lost to the enemy, which ensures that the Italians cannot rest on their laurels after any local victory.

One site of brutal combat is the summit of Mount San Michele, on the north western corner of the Carso plateau, overlooking the town of Gorizia. The peak was briefly captured by the Italians on the 20th only to be lost to a counter-attack on the 21st. Today the Italians storm the mountain-top again, but the Austro-Hungarians are determined not to surrender the position. A counterattack dislodges the Italians, but they too are loth to accept defeat. A second Italian assault takes the summit again, but by the day’s end the Austro-Hungarians have taken back the peak. Losses on both sides are horrendous.

Painting by R.A. Höger of fighting during the Second Battle of the Isonzo (Vasily Sergeev’s LiveJournal)

Yesterday British forces (mostly recruited in India) fought the Turks outside the Mesopotamian city of Nasiriya. The Turks were pushed back to the city itself before nightfall halted fighting. As the sun rises today the British are preparing to attack again, but they are greeted by the sight of a delegation of Nasiriya’s leading citizens rowing out to them in a boat. They have come to surrender the town to the British, as the Turks have slipped away in the night. The British are pleased, as they were not keen on another day of tough fighting.

The British advance up the Euphrates was undertaken to secure the approaches to the port of Basra. With Nasiriya on the Euphrates and Amara on the Tigris in British hands, Basra should be safe. But General John Nixon, the overall British commander in the region, thinks otherwise. The Turks have a strong force in Kut al-Amara. This town is on the Tigris river but the Shatt al-Hayy canal runs from it to the Euphrates. Thus, the Turks in Kut are free to attack down either of the two rivers. Nixon thinks that Kut must be in British hands for his position to really be secure. Nixon petitions London for the reinforcements that will allow him to attack Kut in strength.

In Mesopotamia, British forces have advanced up the Euphrates river from the port of Basra. Now they attack the town of Nasiriya. Ottoman forces are commanded by Ali Jawdat. His small contingent of regular Turkish troops is supplemented by locally recruited Bedouin Arabs.

The Bedouin are not entirely steadfast in their support of the Ottoman Empire. When the British approach in strength the Bedouin decide to change sides. They attack Turkish troops to steal their weapons before riding away. Jawdat himself is relieved of his weapons and valuables by the Bedouin before they make themselves scarce, leaving him to be captured by the British.

Despite these reverses, the Turkish troops put up a tough fight. They give ground grudgingly, often yielding positions to the British after brutal hand to hand fighting. But as night falls the Turks have been forced back to the gates of Nasiriya.

The German advances into Poland from north and south are hammering the Russians. It is becoming increasingly clear that the enemy advance cannot be stopped; attempting to hold onto Poland will lead to the destruction of any armies left to defend it. The Northwestern Front of the Russian army is commanded by General Mikhail Alexeev. In an effort to salvage what he can from the wreckage, he now orders that forces in western Poland are to retreat to new lines to the east. The pretence is maintained that Russian forces are going to establish a new line in eastern Poland, but few doubt that Russian forces will be moving much further away. The control of central Poland established by Russia in the late 18th century is coming to an end.

The series of retreats Russia has made since the start of Germany’s Gorlice-Tarnów offensive are blurring into one, becoming known collectively as the Great Retreat. Although the Russians are largely successful in manoeuvring their armies to avoid encirclement, the endless retreats are demoralising. In many cases the Russian forces are also having to evacuate positions where arms and materiel have been stockpiled, which causes great annoyance to under-equipped soldiers. The Russians are trying to emulate the “scorched earth” tactics that defeated Napoleon in 1812, but disorganisation means that much useful material is being left behind intact for the Germans.

The successive failures of the army in the war seem to be laying bare the failed nature of the Tsarist regime itself.

The sinking of the Lusitania by a German U-boat greatly affected the United States of America. The deaths of US citizens travelling on a civilian vessel turned opinion in the neutral country against Germany. President Wilson has already sent two notes of protest to Germany, the second so strongly worded that it forced the resignation of William Jennings Bryan, the fiercely anti-war Secretary of State. He is replaced by his deputy, Robert Lansing, who favours a stronger line with Germany.

Germany’s replies to Wilson’s notes have been unsatisfactory. Now Wilson sends a third note of protest. The wording now is uncompromising. Germany’s assertion of freedom to attack civilian vessels without warning is rejected. Instead Wilson demands that Germany respects the freedom of the seas. The note finishes by saying that the US government will treat continued German attacks on civilian vessels as “deliberately unfriendly”.

The note retains the polite language of diplomatic correspondence, but Wilson has moved beyond mere protest. The third note is effectively an ultimatum. If Germany persists in its campaign of unrestricted submarine warfare then it will find itself at war with the United States.

Full text of the note