Germany’s Zeppelin bombing raids on Britain have not exactly brought the island nation to its knees. Now the Germans escalate the campaign, with a Zeppelin bombing raid on London itself. The Kaiser had been opposed to attacks on the British capital, for fear of killing his relatives in the British royal family. The Kaiser has however agreed to attacks on London’s docks, which has been interpreted liberally as meaning that anywhere to the east of Charing Cross may be bombed freely.

Under cover of darkness, the LZ-38 Zeppelin flies over London. It drops a number of bombs on Stoke Newington and Hackney, killing some seven people, including three year old Elsie Leggatt.

This is the first attack on London in hundreds of years.

Germany still has forces at large in its West African colony of Kamerun. Some of these are besieged at Mora in the north of the country. Forces based at Garua have retained their freedom of action and recently launched a minor invasion of British Nigeria. Although defeated, the German invasion has angered the British: it is simply unacceptable for enemy forces to be invading its colonies. The German base in Garua must be taken. Now an Allied force (mainly British, but with some assistance from the French, including heavy artillery) has reached the environs of Garua. The Germans have fortified their base and stockpiled food and ammunition in preparation for a long siege. But the British want things over in a much shorter timescale. They dig trenches opposite the weakest part of Garua’s defences and then begin to batter them with the French guns. At night the Allies work to further undermine the enemy’s defences by digging their trenches closer and closer to the German lines.

The Galician fortified town of Przemysl fell to the Russians after a long siege back in March. The Russians have not had long to celebrate their triumph. With the Gorlice-Tarnów offensive seeing the Russians pushed back everywhere, the Austro-Hungarians are now back in the vicinity of Przemysl, advancing from the south-west. And this time they have brought their German friends with them.

An attack to take the town’s outlying fortresses by sudden assault failed. Since then the Austro-Hungarians have battered the defenders with their heavy 420mm siege guns. Now the infantry assault begins again, with the Austro-Hungarians and Germans methodically advancing to capture the enemy’s positions one by one. Przemysl will not fall overnight, but its capture looks increasingly inevitable.

image source (Visit Przemysl, with pictures of the fortifications today) 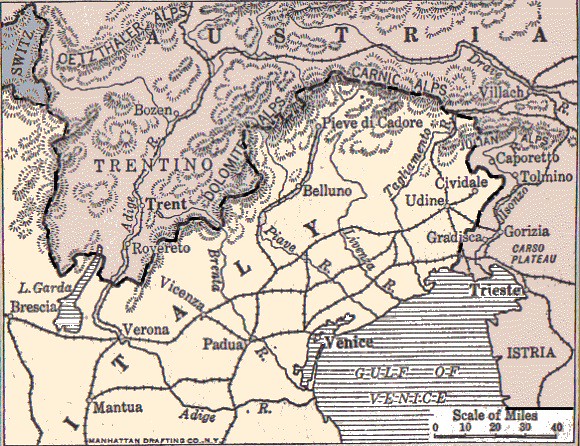 The Italians have finally crosses the Austro-Hungarian frontier in strength. However, they do not advance very far, fearing to attack the enemy until their own forces are fully mobilised (which is not expected to be the case for some time). They take the town of Karfeit (known to the Italians as Caporetto) but do not press forward against the high ground beyond the Isonzo river.

Meanwhile the Austro-Hungarians are desperately trying to prepare their defensive lines, knowing that it is only a matter of time before the Italians launch a major offensive. Austro-Hungarian chief of staff Conrad appoints General Svetozar Boroevic to command on the Italian front. Like many of the men he leads, Boroevic is a Slav, from territory coveted by the Italians. They have no desire to be ruled by Italy and are determined to defend their homeland from invasion.

The Austro-Hungarians are heavily outnumbered; there is no question of their launching an offensive. Instead they will have to fight a defensive war. Boroevic orders that every position be fortified and held to the last man, with reserves behind the line always ready to launch counterattacks. His resolve and that of his men will be tested soon.

Britain, Russia and France have jointly warned the leaders of the Ottoman Empire that they will be held personally liable for abuses committed against the Empire’s Armenian population. If this was intended to deter future mistreatment of the Armenians, it fails. Today the Turkish parliament passes a bill presented it to it by Mehmet Talaat, the interior minister. The law provides the authorities with extreme powers for use in the furtherance of the Empire’s security and internal order. These include not merely military and police measures against insurgents but the power to forcibly move entire populations from one location to another.

The Turkish authorities have already begun to deport Armenian communities from provinces close to the Russian front. Today’s law puts these deportations on a more sound legal basis. The leaders of Turkey see the Armenian population as profoundly disloyal and a fundamental threat to the security of the Empire. The deportations are intended to remove the Armenians from areas where they can assist the enemy. Today’s law is vague as to where the Armenians are to be sent to, but separate orders instruct that they be sent to inhospitable Syrian desert regions or other locations in which it is hard to sustain life. No serious provision is made for supplying the deportees with food and water while they are in transit.

But aside from the written orders to deport the Armenians, other verbal orders are transmitted to local authorities in the Empire. These order not merely the deportation of the Armenians but their extermination. At the commencement of deportations, local officials are to kill some of the Armenians with the expectation that the rest will die or be killed while on the move or else in their final destinations. Turkish officials who question these unwritten orders or who ask for them to be confirmed in writing are seen as disloyal; they are dismissed from their posts and in some cases they are themselves also murdered. On land the fighting at Gallipoli has stalemated, with the Allies unable to break out of their enclaves and the Turks unable to drive them into the sea. The British have been using the heavy guns of their navy’s battleships to bombard Turkish positions, hoping that eventually they will be able to wear them away. Germany, Turkey’s ally, has responded by sending U-boats to attack the British fleet at Gallipoli. After sinking the Triumph on the 25th, today the U-21 strikes again, torpedoing another battleship, the Majestic. The Majestic sinks quickly, with the loss of 49 sailors. Among survivors are two dogs.

The British fear losing more of their valuable battleships at Gallipoli. After the sinking of the Majestic they order their other capital ships to retire to safe ports. The bombardment of Gallipoli will continue, but with less valuable ships bearing less destructive guns.

British warships are patrolling on the Mediterranean side of the Gallipoli peninsula, blasting Turkish positions with their heavy guns. Although the Gallipoli campaign is currently in stalemate, the Allies hope that the guns of their ships will eventually wear down the Turks.

Britain’s enemies have other ideas. Today the old British battleship the Triumph is shelling Turkish positions when look-outs spot a submarine’s periscope some 300 to 400 yards to starboard. It is the U-21, a German U-boat The ship’s guns turn to fire on the periscope, but too late. The U-boat unleashes a submarine and Triumph is struck. It sinks rapidly. Most of the crew are rescued but some 78 men die with their ship.

The Germans are not the only possessors of submarines. Britain’s E11 has slipped through the Dardanelles and has preyed on Turkish shipping in the Sea of Marmara. Now, though it has sailed on to attack shipping in the port of Constantinople itself. Commander Nasmith, the E11‘s commander, hopes to catch the Goeben, the German battlecruiser that is now the flagship of the Turkish fleet. If the Goeben is sunk then the naval balance in the Black Sea will be completely changed to Russia’s advantage.

Unfortunately for Nasmith, the Goeben is not in port. So he satisfies himself by torpedoing the Stamboul, a Turkish transport vessel. The Stamboul has to run aground to avoid sinking.

The E11‘s attack on Constantinople is the first naval attack on the Ottoman capital in over a hundred years. Panic erupts in the city.

British politics have been in flux since the eruption of the “shell crisis” and the resignation of Admiral Fisher. Many in the press and elsewhere are saying that Asquith’s Liberal government is not prosecuting the war effectively. The stalemate in Gallipoli is also being blamed on the government, with Winston Churchill, the naval minister, being most closely associated with the debacle.

The political crisis is so grave that the government ends up having to be reconstituted. Asquith forms a new cabinet with ministers from the Conservatives and Labour Party joining the Liberals. Asquith is able, for now, to keep the other parties from any of the key ministries; Andrew Bonar Law, the Conservative leader, becomes merely the Secretary of State for the Colonies. Nevertheless, the principle has been conceded that the Liberals are unable to prosecute the war on their own.

Winston Churchill is no longer the minister in charge of the navy. He remains in the cabinet, but the price of the failure at Gallipoli is his demotion to a non-executive role.

The “shell crisis” has seen Lord Kitchener subjected to much criticism over his alleged inability to keep the army supplied with munitions. He retains his post, however, as he is a popular figure in the country as large. But responsibility for munitions is taken from him and given to David Lloyd-George.

The formation of this cabinet marks the end of Britain’s last ever wholly Liberal government.

Fighting is continuing at Ypres. The Germans have had to divert forces south to face the ongoing French offensive in Artois but that does not stop them making one last push for the Belgian town. The Germans use gas again but their gains are modest, merely minor adjustments of the line in their favour. And with that the Second Battle of Ypres grinds to a halt. The Germans have failed to take Ypres, but they have greatly reduced the Allied salient and are now almost on top of the town. Ypres itself has been reduced to rubble by German artillery fire.

The Germans have suffered some 35,000 casualties since the battle started in April. British, French and Canadian forces have suffered twice as many, but despite gas attacks and massed enemy assaults they have succeeded in keeping the ruins of Ypres out of German hands.

Disturbing reports have emerged from the Ottoman Empire of massacres of Armenians being perpetrated in various localities by Kurds and Turks, apparently with the support of local officials. News of the siege of Van (though not yet its relief) and the killings of Armenians in the town’s vicinity has also made it to the outside world, as have accounts of the mass round-up of Armenian notables in Constantinople.

These reported massacres are shocking opinion in Allied capitals. On the face of it, there is nothing that can be down about them. Turkey is an enemy nation with whom Britain, France and Russia no longer have diplomatic relations. But today the Allies take an unusual step. Through the United States ambassador in Constantinople, the governments of France, Britain and Russia send a message to the Turkish government. The Allies warn Turkey they are aware of the abuses being inflicted on the Armenian population. Furthermore, members of the Turkish government are informed that they will be held personally responsible for these terrible crimes.