Leon C. Thrasher is a mining engineer from the United Stages of America. He works for a mining company in the Gold Coast but has been spending the last few weeks in London. Now he is on his way back to Africa onboard the Falaba, a British passenger ship. Unfortunately for him and the ship’s other passengers, as the ship sails out of the Irish Sea it encounters a German U-boat. It tries to outrun the U-boat (the U-28, under the command of Georg-Günther von Forstner) but the U-boat catches up. Forstner gives the Falaba ten minutes to evacuate its passengers and crew.

What happens next is not entirely clear. The U-28 seems to have fired a torpedo at the Falaba before the ten minutes are up. This may be out of teutonic sadism or it may be because the Falaba was radioing and signalling for help to fast approaching British warships.

Some reports say that the torpedo causes a tremendous explosion, because the Falaba is carrying ammunition supplies that the torpedo ignites. Whether this is the case or not, the ship sinks quickly, taking down some 100 or so people from the 250 people onboard.

Mr Thrasher is among those who are lost to the sea. News that a US citizen has been slain by a German U-boat while travelling on a civilian vessel causes outrage in his homeland.

Images both from Merseyside Roll of Honour

U-666 originally from Punch 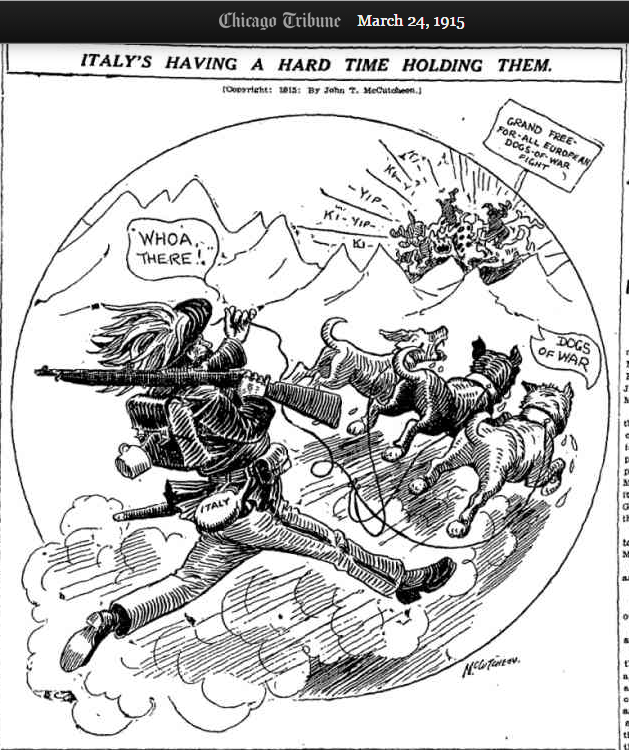 Despite its alliance with Austria-Hungary, Italy has never been close to the Habsburg Empire. Italian leaders have long felt that the border between the two countries was unfairly drawn, leaving much territory they see as naturally Italian under the rule of the Austro-Hungarians. This hostility what inclined the Italian leaders last year to keep their country neutral, together with a fear that joining Germany and Austria-Hungary would mean allying with the war’s losing side. 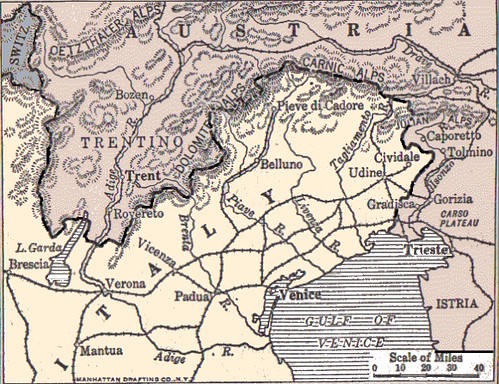 With the situation on the Eastern Front not going so well and with Germany especially keen to keep Italy out of the war, Austria-Hungary’s leaders now make their most generous offer yet to the Italians. They promise territorial concessions in the Trentino region while further east they will withdraw to the Isonzo river. They are not prepared to give Italy the port of Trieste, but they are offering to grant the city autonomy. They also offer to discuss further territorial adjustments.

Antonio Salandra and Sidney Sonnino, Italy’s prime minister and foreign minister respectively, reject Austria-Hungary’s offer. They claim that the proposal is inadequate and also insufficiently detailed. But the real reason is that their territorial appetites have grown. They now want to bring the whole of the Trentino and South Tyrol into the Italian state, as well as to absorb Trieste and the Istrian peninsula. They also crave territories along the Dalmatian coast from which Italian power could be projected into the Balkans.

Salandra and Sonnino’s ambitions cannot be achieved without war. This does not concern them. A string of defeats mean that Austria-Hungary is clearly on its last legs, so Italy’s attacking it should put an end to the Habsburg Empire once and for all. Salandra also believes that this short victorious war will make him the undisputed master of Italian politics.

“Italy’s having a hard time holding them” ( @ThisDayInWWI )

The map of the Austro-Italian border area came from a website that has mysteriously disappeared.

The Russians overran the Austro-Hungarian province of Galicia last year. The Carpathian Mountains stand between them and the heartland of the Hungarian half of the Habsburg Empire. Fighting in these mountains has been see-sawing backwards and forwards. Earlier this year the Austro-Hungarians took control of the mountain passes but were unable to push from them to recapture Galicia.

Now the Russians attack once more in the Carpathians. Perhaps they are buoyed up by their capture of Przemysl, perhaps news of the town’s fall has shaken the Austro-Hungarians, but either way the Russians are able to capture the Lupkow Pass through the Carpathians. Could the way finally be open for them to mount an invasion of Hungary?

They say the trenches are an abattoir. 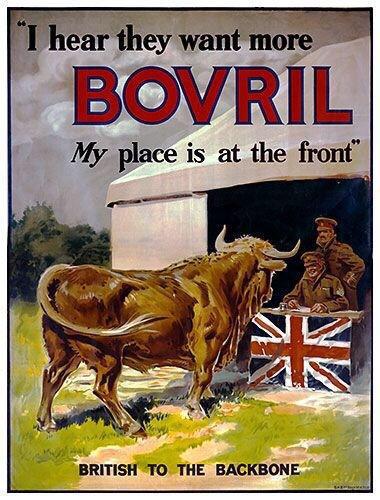 Indian Muslim troops in the British army mutinied in Singapore on the 15th of February. Now the mutiny is over. Some of the mutineers have been killed in combat, others have been rounded up and put on trial. Some are transported or given long prison sentences but some 47 are sentenced to death. Today they are executed by firing squad in public executions watched by some 15,000 people.

Austro-Hungarian troops have been under siege in the Galician fortress town of Przemysl since November. The situation has become increasingly desperate, with the garrison now on the brink of starvation. A recent attempt to break out through the Russian lines has failed. Now General Kusmanek, the Austro-Hungarian commander, accepts the inevitable. He orders his men to surrender the town, after first destroying anything that could be of use to the enemy. The fall of Przemysl delivers an army of nearly 120,000 men into the hands of the Russians. The bag includes 9 generals.

Przemysl had largely been emptied of civilians before the beginning to the siege, but among those who remained are members of the town’s Jewish community. The Russians now subject these to a brutal reign of terror.

The fall of Przemysl releases large numbers of Russian troops who had been besieging it. Now perhaps they will be able to push through the Carpathian Mountains into the Hungarian lands beyond.

Icy death in the Carpathians

Turkey repulsed at the Suez Canal

The Second Battle of the Masurian Lakes: Germany attacks

Masurian Lakes: the battle draws to a close

Turkey starts to deal with the Armenians