The Ottoman Empire is in trouble. Its ruling triumvirate brought Turkey into the war on Germany’s side in the hope that this would restore the empire’s former glory. Unfortunately a series of reverses mean that the empire is now threatened with destruction. British forces have landed at Basra and are menacing Mesopotamia. The disastrous defeat at Sarikamish means that Anatolia is vulnerable to a Russian invasion. And the French and British naval attack on the Dardanelles forts on the 19th of February suggests they are planning an assault on Constantinople, the Ottoman Empire’s capital. As if to emphasise the threats faced by the Ottoman Empire, today the British and French navies again attack the forts at the mouth of the Dardanelles. This time they also land raiding parties to smash up the Turkish defences. But the Young Turks who rule the Ottoman Empire are not going down without a fight. They start preparing their armed forces for a defensive war. They also turn their attention to ethnic groups within the empire whose loyalty is doubtful. The Armenian minority in Anatolia is seen as particularly troublesome. As Christians living in a Muslim empire their allegiance to the Ottoman Empire cannot be taken for granted. The Armenians are suspected, perhaps with some cause, of preferring the Russians to their Turkish masters.

Ismail Enver, Turkey’s minister of war, goes further. Armenian treachery, he asserts, is the reason why his army was destroyed when he led it against the Russians at Sarikamish. It was his own decision to lead men without proper winter clothing and equipment across freezing snow covered mountains in the depths of winter, but to Enver it was somehow the fault of the Armenians that his freezing and starving soldiers died in their thousands.

Enver now takes the first steps towards dealing with these troublesome Armenians. He issues orders that all Armenians in the Turkish army are to be disarmed and transferred to labour units. The Turkish army has many labourers attached to it, filling all kinds of non-combat roles. Enver is not however taking weapons from Armenian soldiers because the army needs more labourers. Rather, he is afraid that they will desert, taking their guns with them, and become pro-Russian guerillas. And there is another more sinister reason for disarming the Armenian soldiers, one that is understood by Enver’s subordinates without needing to be stated explicitly. The Armenians are being disarmed so that they can be killed.

German 1914 ethnographic map of Asia Minor and the Caucasus (Wikipedia)

The French have resumed offensive operations in the Champagne sector of the Western Front. They are not meeting much success and are suffering heavy casualties from German machine gun and artillery fire.

Fighting on the Western Front is far less mobile than in the east. The generals still dream of wars of movement and manoeuvre, but their soldiers are unable to make the kind of sweeping advances that are still possible in Poland. On the Eastern Front, the density of men and guns is far lower than in the west, making it easier for attacking armies to make gains by concentrating on a weakly defended sector. Each of the opposing armies is so concentrated on the Western Front that there are no sectors so weakly defended. Any attempt to advance must take place against relatively high concentrations of men and guns, ensuring that any such advance will be bloody and difficult. And even if an attacking force achieves a local superiority in numbers, the better transport infrastructure of Western Europe means that the enemy can quickly bring in reinforcements.

The Second Battle of the Masurian Lakes is over. The Germans have routed the Russians, driving them out of East Prussia; they no longer hold any German territory. But German forces have failed to win a victory so great that it would knock Russia out of the war. The stand of Bulgakov’s XX Corps in the Augustow Forest bought time enough for many Russian formations to escape the German trap. Bulgakov’s men have been fought to destruction and their remnants now surrender to the Germans, but a Russian counter-attack now forces the Germans to halt their offensive.

Hindenburg and Ludendorff are disappointed that they have not won a war-winning victory, yet they still have a lot to feel pleased about. Aside from expelling the enemy from East Prussia, they have also captured another 100,000 Russian prisoners and done much to demonstrate the superiority of German arms. Yet perhaps Falkenhayn is right to believe that the war cannot be won in the east: despite their terrible losses, the Russians always seem able to find more men and are able to fight on.

There are books about dogs in WW1. Stories enough to fill every issue of Dogs World, Forgotten dogs and all future copies of Boys Own stories. Messenger Dogs, Guard Dogs, Rescue Dogs, Dogs that pulled machine guns, smelt gas, the American dog Sergeant Stubby with more gongs that a North Korean General. So in less than thirty seconds I will tell you what dogs if left to themselves can teach us about life, the folly of war, and what we all should be doing. It is from a letter sent by Lieutenant Melville Hastings to the Headmaster of Wycliffe College. Reproduced in War Letters of Fallen Englishmen. Victor Gollancz Ltd, 1930.  Melville was writing about  lying out in no man’s land.

Russia has a big army but the country’s weak industrial base means that its soldiers are often short of vital war equipment. Britain and France have the industrial might to supply the Russians, but Turkey blocks access to Russia’s Black Sea ports.

The Allies know that entering the war on Germany’s side was not universally popular in Turkey. Since the war began, the Ottoman Empire has already suffered two reverses, the terrible disaster of Sarikamish and the failed invasion of Egypt. The Turks have also been unable to stop British forces from establishing themselves in Basra, in Turkish Mesopotamia. In short Turkey looks internally divided and weak. It controls the entrance to the Black Sea, but would the Ottoman Empire really be able to block a serious attempt to force the straits?

Winston Churchill, Britain’s naval minister, thinks that a determined assault will open up the Dardanelles and Bosphorus to Allied shipping. Furthermore, a naval attack on Constantinople could strengthen Turkey’s anti-war faction and force the Ottoman Empire to sue for peace. With British supplies flowing to the Russians, the German position on the Eastern Front would start looking a bit dicey. In short, a successful campaign against Turkey raises the possibility of Germany being defeated in the east without Britain having to deploy a huge land army in France.

Today a combined force of British and French warships attack Turkish forts on the Gallipoli peninsula. These forts guard the entrance to the Hellespont, the narrow straits that lead from the Aegean up to the Sea of Marmara and then on to the Bosphorus straits, Constantinople and the Black Sea. The Allied ships blast away at the forts but the results are disappointing. The Allies are unable to disable the forts, and when Allied ships approach the shore to inspect the damage, the forts begin to shell them back, supported by other artillery pieces.

The attack on the Gallipoli forts causes consternation in Constantinople. The Turkish leaders now begin to have an inkling of the Allies’ big plan to knock the Ottoman Empire out of the war.

Britain’s colony of Singapore has been engulfed by fighting as mutinous Indian troops have battled the British and other loyal colonial soldiers. Now the tide turns against the mutineers. Heeding calls for help, French, Japanese and Russian warships arrive in Singapore and land their marines. After a short battle many of the mutineers surrender. Others flee into the countryside outside the city. The mutiny is effectively over.

The response to the Turkish Sultan’s call for a Holy War against the Allied powers has been disappointing. Egyptians and Muslim Indian troops in the British army did not turn on the Infidel when Turkish forces recently attacked the Suez Canal. On the other hand, the bizarre episode of the Ice Cream Jihad in Australia’s Broken Hill suggests that there are those who will heed the Caliph’s call to arms. 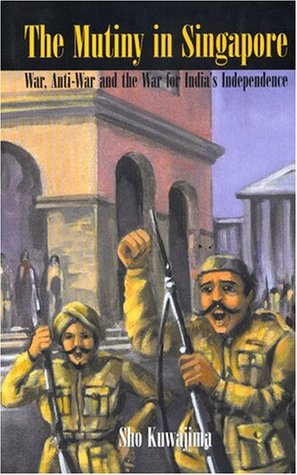 In Singapore a Muslim unit of the Indian army is preparing to be transferred to Hong Kong to replace another regiment there. However, rumours circulate among the Indians that they will actually be sent to the Western Front or perhaps to fight against the Turks, their fellow Muslims. Agitators supporting an armed uprising against British rule in India seem also to be influencing the soldiers. Today they revolt against their British masters, killing two British officers who try to restore order.

There are few loyal troops in Singapore. The mutineers fan out, seizing arms and ammunition and killing British officers and civilians. They attack a barracks where German nationals are being interned, including some of the crew the Emden. The mutineers try to recruit the Germans to their cause, but they refuse to join them.

Some British and Malay troops are able to block the mutineers from advancing into downtown Singapore. The British also send wireless messages requesting help from any Allied ships nearby.

The Germans are attacking from the Masurian Lakes region of East Prussia. They have put the Russians to flight and are now hoping to turn the enemy’s flank and force their surrender. But events are beginning to frustrate German ambitions. Not all the Russian formations have broken: the XX Corps under General Pavel Bulgakov is still holding together. They take up a strong defensive position in the Augustow Forest, resolving to buy time for the rest of the Russian army to escape the Russian trap.

British soldiers at the front have already coined a new phrase, “shell shock”. Now it makes it into the pages of The Lancet, in a report by Captain Charles Myers entitled “A Contribution to the Study of Shell Shock”. Myers is a psychologist working for the British army’s Medical Corps. His report describes cases in which soldiers exposed to enemy shelling are manifesting symptoms akin to those of neurological patients, despite the lack of head wounds. Myers reports that with rest and positive suggestion the men’s condition has gradually improved, but this strange psychological condition remains poorly understood.

Two days ago the Germans attacked in the Masurian Lakes region of East Prussia, punching a hole in the Russian line. Now they launch a second wave of their attack, coming at the Russians from the north with a fresh army. The Russians reel, surprised that the Germans have so many men to attack with. With the Russians withdrawing in considerable disorder and the Germans hitting their right flank, there is a real danger that the battle will turn into a second Tannenberg, with the Russian army cut off, surrounded and destroyed.