Yesterday the Turks attacked Sarikamish and were repelled. Furthermore, enemy artillery fire is exacting a terrible toll on Turkish forces. The Turkish army in contrast has struggled to bring its artillery through the snowy mountains to the front. Enver’s subordinates report to him that their forces are too depleted by the cold and enemy action to attack again, that in any case the men are too weakened by hunger to press home the assault. But the Turkish Minister of War is unmoved. Enver still sees Sarikamish as an opportunity for Turkey to win a decisive victory over the Russians, one that would be worth any cost to achieve. He issues his order: “The offensive is to go on at full strength”.

The Germans are using large numbers of trained dogs in their armed forces. The animals fulfil a variety of roles, from assisting medical personnel to serving with sentries and patrols. Now a letter writer to the Times of London reports that that the German army has such a need for dogs that whenever an enemy town is captured, all suitable dogs are immediately pressed into the invader’s service. To avoid any of the remaining animals being used subsequently against them, the Germans are apparently destroying all dogs that they do not take into their service. 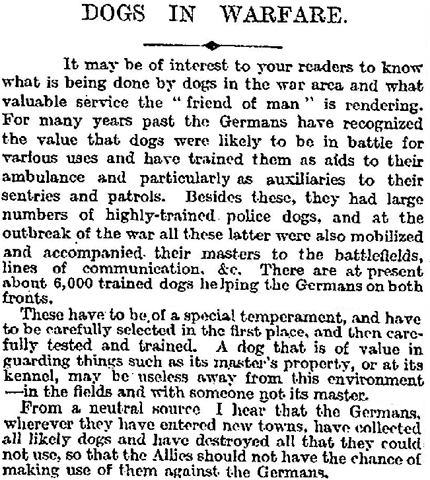 Enver’s bold plan to drive the Russians from the Caucasus has come unstuck. His army have finally made it to the gates of Sarikamish, but the harsh weather, shortage of food and lack of winter equipment have greatly reduced their numbers. Now the depleted Turks assault Sarikamish, in places charging across waist deep fields of snow. But the Russians are in well-prepared positions and they repel the Turks, inflicting terrible casualties. Britain suffers its first naval defeat in 100 years. Britain’s invasion of German East Africa fails. Germany and Russia lay into each other in Poland. Austria-Hungary has another go at invading Serbia. Germany loses its last Pacific possessions. Major fighting at Ypres comes to an end (for now).

[Poland] The Germans lick their wounds

Admiral Spee has a presentiment

Britain tightens its blockade of Germany

The fall of Tsingtao

The Emden’s luck runs out

A new German offensive in Poland

Ypres: the battle grinds to a halt

The Austrian invasion of Serbia is still going well

Poland: the Germans escape a trap

I have updated my list of who’s who in 1914. These are mostly people who have been tagged in more than one post. You can see this list here.

Ismail Enver, Turkey’s Minister of War, is leading an attack on the Russian military base of Sarikamish in eastern Anatolia. The plan of attack is bold, calling for units to move at great speed to outflank the Russians. Things are unfortunately not going entirely to plan. Turkish forces are struggling to keep to the schedule set by Enver. By now they have outrun their supply lines and many Turkish soldiers are out of food. The cold of winter is exacting a terrible toll, not helped by Enver’s decision to speed the advance of the troops who have to go furthest by denying them winter coats and equipment. The Turks are dying of exposure in very large numbers. And yet, the Russians are rattled by the Turkish advance. The overall commander has panicked and fled to the fortress city of Kars, ordering the rest of the Russian army to follow. But his subordinate, General Nikolai Yudenich, is more confident. He believes that Sarikamish can be held and a defeat inflicted on the Turks. He resolves to stand and fight.

In Europe some soldiers may be putting aside their differences and enjoying temporary truces with the enemy but in Southern Africa the war continues as usual. Attempts by South African and British forces to invade Germany’s colony of South West Africa have thus far proved unsuccessful. In September the Germans defeated an invasion force at the Battle of Sandfontein.

South Africa has also been convulsed by the Maritz Rebellion: a revolt of pro-German Boers, named after its leader, Manie Maritz. The rebels want to remove South Africa from the British Empire and hope to do so with the aid of the Germans. The rebellion has distracted the British and South African loyalists, as they do not want to send forces into South West Africa and leave the rebels a free hand in their rear.

The rebellion continues but the authorities now have it largely under control. Maritz himself has fled to German territory. With the situation in South Africa no longer critical, attention is turned once more to South West Africa. South Africa has an enclave in the middle of German territory: the port of Walvis Bay (shown as Walfisch Bai on the map above). To put extra pressure on the Germans, a South African strike force lands here today. The plan is for this force to hit the enemy in the middle and north while another thrust is made across the border from the south.

Pope Benedict XV has urged the warring nations of Europe to cease their senseless slaughter for Christmas. The politicians and senior military commanders have not proved amenable to the Pope’s request, but ordinary soldiers are more sympathetic. On the Western Front, some British and German soldiers suspend hostilities and meet in the No Man’s Land between the trenches. They retrieve bodies of the dead and exchange pleasantries and gifts with their enemies. There are unconfirmed reports of football matches being played between the opposing sides. And it is not just rank and file soldiers who take part in the truces, as some officers go out to meet the enemy. General Walter Congreve writes home that he only decided against taking part himself out of fear that a general would prove too tempting a target for the Germans.

There are other impromptu ceasefires in sectors where the Belgians and French face the Germans. But the ceasefires are not universal. Skirmishing and shelling continue on many parts of the frontline.

The Christmas truces will long remain a popular subject for songwriters and supermarket advertising campaigns.

The real story behind the 1914 Christmas truce (Daily Telegraph, with General Congreve’s letter)

It is Christmas Eve. In the English Channel port of Dover people go about their business, assuming that they have nothing to worry about from the conflict raging across Europe. But the town’s calm is about to be shattered. Just five years ago Louis Blériot was the first man to fly an aeroplane across the Channel. Now German pilot Alfred von Prondzynski repeats the feat, flying to Dover with less peaceful intent. Once he sees Dover Castle and the port below him, he throws a bomb down at the town below. It lands in a garden beside a church, blasting a crater several feet deep. A gardener falls out of a nearby tree he had been pruning but is not seriously hurt. He is the only casualty of the attack. Although the Ottoman Empire is notionally an absolute monarchy, real power lies with the Committee of Union and Progress, the so-called Young Turks. The leading figure within the CUP is Ismail Enver, the Minister of War. Enver sees the war and alliance with Germany as a vehicle for the restoration of Turkey’s greatness. He plans a great offensive against the Russians in the Caucasus, aiming to attack and destroy Russian forces centred at Sarikamish. When this Russian army has been crushed, Enver will be able to bring Georgia and other Russian territories in the Caucasus back into the Ottoman Empire. After that, who knows? Perhaps he will lead his army on an overland march to attack the British in India.

Enver’s plan of attack is bold and Napoleonic in conception. He plans minor frontal assaults on the Russians to pin down their forces and disguise his main thrust: a strong outflanking force that will move swiftly and take the Russians in the rear, cutting off their line of retreat. Enver will personally command the operation.

Today the Turkish forces begin to advance. Winter grips the land and it is bitterly cold. To avoid having his men bogged down, Enver sends them to march on the highest pathways in the hope that the wind will have swept them clear of snow. The troops with the furthest to march will inevitably move far ahead of Turkey’s ability to keep them supplied; even before they start, many soldiers lack proper boots. Enver decides also to speed his soldiers on their way by having them march without their packs and winter coats.

In the Anatolian winter, temperatures can drop well below -31º C.